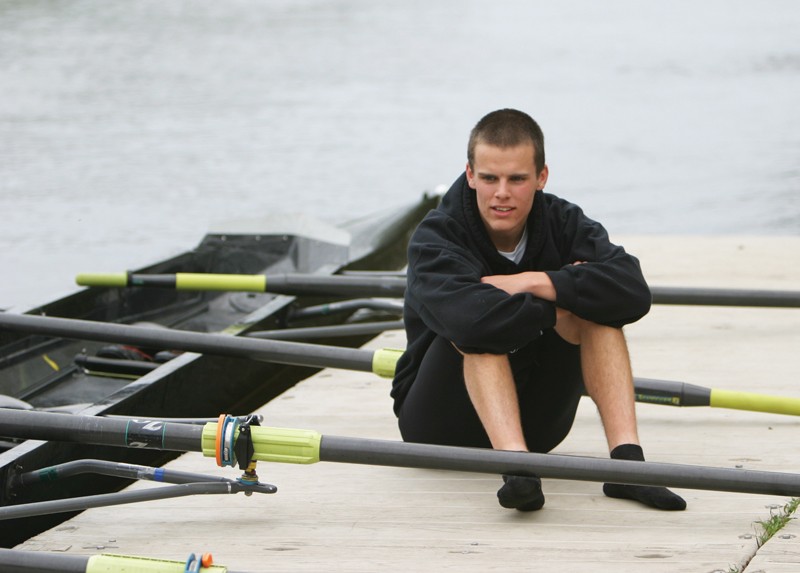 The Grand Valley State University rowing club welcomed back one of its own after Robbie DeWeerd returned from serving in the Middle East.

The team embraced the return of DeWeerd, a senior from Holland, Mich., this season after he spent more than nine months in Afghanistan working as a corrections officer with the U.S. Naval Academy.

GVSU head coach John Bancheri said he’s thrilled to have one of his top rowers back.

“He’s going to make the team better,” Bancheri said. “Robbie brings an aura of positive energy that effects everyone. It was a big loss when he left. He was a team captain and one of our top guys physically.”

DeWeerd still found a way to be a leader despite being stationed halfway across the world.

He not only located a rowing machine while overseas, but also found time on his day off to voluntarily keep up with the team’s workouts and submit his scores on a weekly basis.

“Everyone on this team has incredible dedication,” Bancheri said. “But it’s truly amazing to do the training voluntary while you’re 6,000 miles away. Every coach has their favorite players, and they’re usually the ones who will do whatever it takes to make the program better.”

His level of commitment and dedication inspired his teammates and they made sure his story received its due recognition.

GVSU’s top boat entered the San Diego Crew Classic without a name, so they decided to honor their absent teammate by etching DeWeerd’s name on the front of the bow with electrical tape.

“ESPN U was covering the event and they knew about Robbie,” Bancheri said. “They were really pumping us up.”

GVSU’s top boat went on to take first place in the Men’s Collegiate Varsity “A” American Specialty Health Cal Cup, perhaps because of DeWeerd’s ability to lead by example.

As the start of the 2013 campaign approaches, the criminal justice major says he is just happy to be home.

“It feels good to be back,” he said. “I’m mostly excited just to get back out there and compete. The (Occoquan Sprints) will be my first time back on the water racing in quite some time.”

His competitive nature and his will to win make him a major asset to the crew.

“Robbie is a motivator and at the same time one of the most competitive guys on the team,” Benedetti said. “There is a lot to look forward to this spring if he’s in the top boat.”

With their captain back in the picture, the crew is ready to get their season started.

The Laker Navy will spend their spring break in Oak Ridge, Tenn. from March 1-10, then compete in the Occoquan Sprints, which will take place in Washington D.C. from April 6-7. After that, they will head to the 18th Annual Lubbers Cup Regatta in Spring Lake, Mich. on April 13.
[email protected]