Anti-Semitic reports on the rise at GVSU 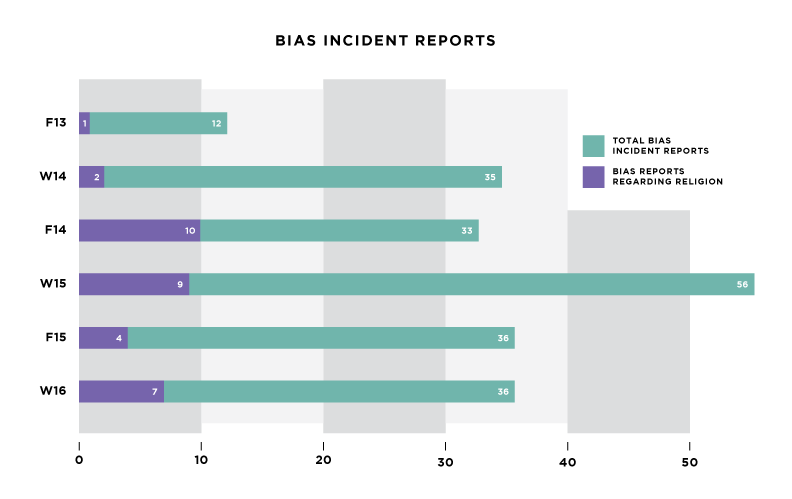 Following a series of anti-Semitic bias incident reports, a campus-wide notification was sent out to the Grand Valley State University community condemning the acts of bias toward the Jewish population at GVSU.

Since Dec. 5, 2015, six anti-Semitic related incidents have been reported on campus. Two of these instances involved swastikas being drawn on walls or doors of residence halls. Two other incidents involved swastikas and additional messages, including “I am a Nazi” and “Hitler did nothing wrong.” An additional incident involved a faculty member making anti-Semitic gestures in a classroom, and the final report involved a Star of David with an “X” scratched into it on the window of a bus.

“The instances of anti-Semitism at GVSU have been a wake-up call to the fact that there’s still some work to do on campus when it comes to difference of identity, religion and ethnicity,” said Katie Gordon, program manager for the Kaufman Interfaith Institute at GVSU.

Though the instances of religiously-related bias incident reports fluctuate from semester to semester, the recent increase in anti-Semitic reports prompted the campus-wide notification, an unusual action from the Division of Inclusion and Equity.

“We may have received one or two (anti-Semitic reports) in previous years, but the trend was disturbing,” said Jesse Bernal, vice president for the Division of Inclusion and Equity. “As we saw this rise, particularly in March and April, we started having conversations that we need to address this as a campus community.”

Though most of these reports were for various acts of vandalism, because there were no real leads on potential suspects, no formal charges have been filed in any of these incidents.

“In the occasion that something was in violation of the student code or law, those bodies are brought in,” said Marlene Kowalski-Braun, associate vice provost for student affairs and inclusion and equity. “In the case of vandalism, that is not free speech, so that got turned over to police and it becomes part of their watch.”

Despite the increase in anti-Semitic acts on campus, Bernal does not believe individuals were singled out by the incidents.

“With the anti-Semitic vandalism, which most of these cases are, we don’t believe that any member of the Jewish community was targeted in any of those acts,” he said. “That doesn’t dismiss the fact that there’s a greater impact on our Jewish community, though. I feel deep concern for students who feel unsafe on our campus.”

For the vast majority of Jewish students, the campus-wide notification from Bernal was the first they were hearing about these incidents at GVSU.

“It made me feel uncomfortable, because a swastika is a representation of the genocide of an entire race,” said a Jewish student at GVSU who declined to be identified for fear of retaliation. “It’s obviously a big problem.”

According to the most data from the 2015 Campus Climate Survey, GVSU is continuing to become a more diverse university, including in regard to its religious makeup. From 2011 to 2015, the campus became 4 percent less Christian. For Gordon, this information, in addition to the reports of religious bias, will shape her work at GVSU in the fall.

“As our campus continues to diversify in regard to religious identity, the need for interfaith will only increase,” she said. “If not positively and constructively engaged through both intersectional and interfaith events, religious diversity can lead to increased division between our differences.”

Moving forward, Gordon hopes to engage with Jewish students and other students who identify with various religious minorities to make GVSU more interfaith-friendly.

In the meantime, Jewish students are encouraged to seek out support from the Division of Inclusion and Equity, the Counseling Center and the Jewish student organization on campus, Hillel.

“(The notification) made me feel really concerned. It was half dread and half concern for my other Jewish friends,” said Jewish student Zoe Kaufman. “It makes me feel uncomfortable to be in classes, as a student. It doesn’t make me have pride in my school.

“It’s so upsetting, and nobody really understands. My non-Jewish friends won’t understand that I’m a target, and these people who are targeting me don’t even know me.”

For Kowalski-Braun, she is hopeful the bias incident reports are a sign that bystanders are standing up for unacceptable behavior, since all but one of the six reports were submitted by non-Jewish GVSU community members.

“This is a place where bias lives,” she said. “We are imperfect, and that’s something we’re trying to address.”