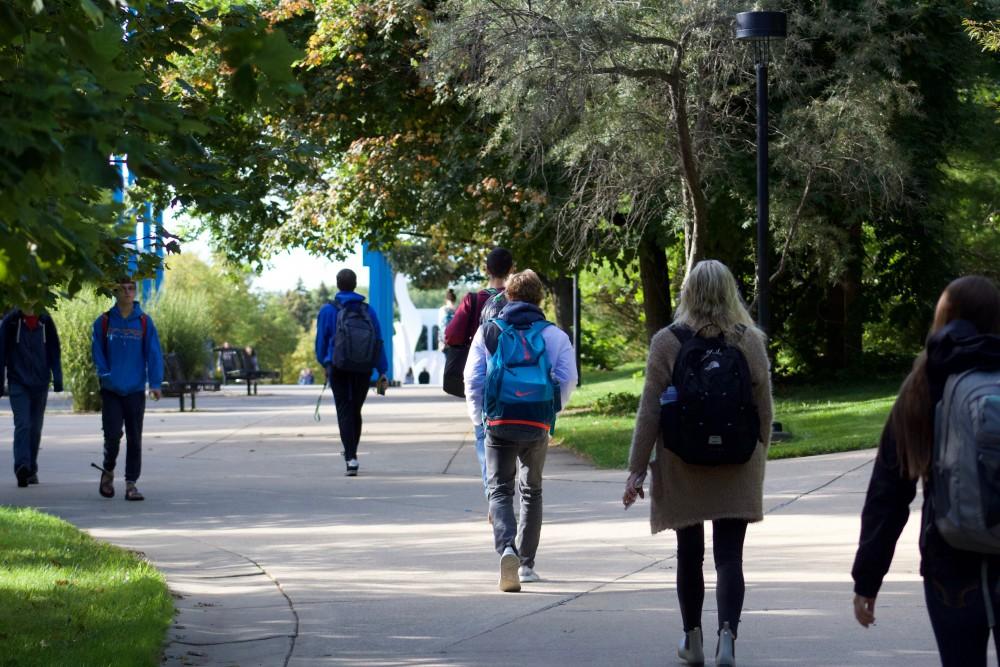 GVL / Hannah Hill Students make their way to class on the first day back from break on Wednesday September 6, 2017.

No matter what background Grand Valley State University’s students come from, a common concern shared by many of them is how humans are affecting the environment. The U.S. is one of the highest producers of trash in the world and is mediocre in recycling compared to some other countries.

That’s why at GVSU, faculty, staff and students work hard to build a sustainable future on campus. Recognizing those efforts is the Sierra Club, which rated GVSU highly on its list of sustainable colleges in the U.S.

GVSU ranked 39 out of 227 U.S. colleges that participated in the Sustainability Tracking, Assessment and Rating System (STARS) survey in March 2017.

All information submitted by colleges through the STARS survey is self-reported and not checked for accuracy. Every college is asked to answer a set of 62 questions, each assigned a specific number of points. The colleges are then ranked based on the amount of points they received out of 1,000.

GVSU ranked higher on the list than any other college in Michigan and higher than many “top 10” colleges in the U.S. as well. The next Michigan college on the list, Michigan State University, came in 91st place. GVSU received a total of 636.15 points.

Gail Philbin, state director of the Michigan chapter of the Sierra Club, said university students have the power to “change the system.” She said having GVSU as a leader in sustainability in Michigan helps pave the way for other smaller entities.

“If a university is willing to step up and make an investment in green technology and reducing waste, that’s key,” Philbin said. “You need to get the decision makers and the players that have money to invest to make big change.”

Yumiko Jakobcic, GVSU campus sustainability coordinator for the Office of Sustainability Practices, said GVSU has made small, incremental improvements in sustainability practices over time, which attributed to GVSU’s high ranking.

She said the ranking is a testament to the work done by students, faculty and staff to make GVSU more sustainable overall.

“I think that it’s such an honor,” Jakobcic said. “It’s wonderful to have so many people working towards sustainability.”

Jakobcic said there are many benefits of being sustainable on campus for both the environment and the people living in it. She said the most rewarding thing for her is seeing students living more sustainable lives.

“My favorite things is to see a student who maybe hasn’t had any introduction to sustainability, and they make some major lifestyle changes by the time they graduate,” Jakobcic said.

The Sierra Club is a nonprofit organization in the U.S. that works to preserve the environment and support so-called “green politics.” The Michigan chapter of the Sierra Club works with volunteers to advocate against the Enbridge Pipeline 5, contamination of the Great Lakes and the operation of many coal factories in Michigan.

The motto for the organization is “explore, enjoy and protect the planet.”