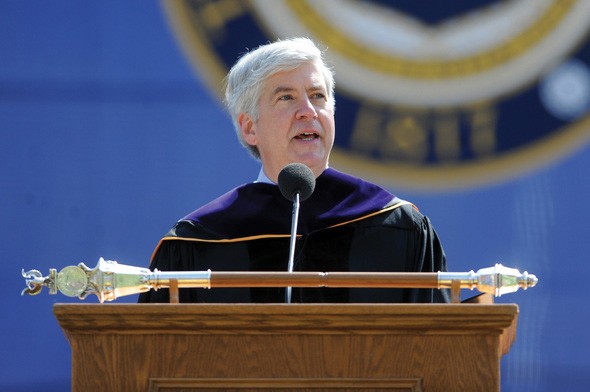 With commencement less than a month away, a group of students at Grand Valley State University have taken to protesting the descision to have Michigan Governor Richard Snyder as this year’s commencement speaker.

The announcement was made at the Feb. 8 Board of Trustees meeting when the idea was passed agreeing to give Snyder an Honorary Doctor of Public Administration degree when he comes to GVSU on April 27.

When a group of seniors contacted junior Ian Post, he and senior Dustin Matthews began readying the protest because the group of students said Snyder has “ignored voters & cut education funding” during his time in office.

“It’s not just the senior’s problem, it’s really a student’s problem,” Post said. “It is affecting a lot more people than just seniors by receiving the honorary degree and speaking at our school. He is representing Grand Valley. He becomes a part of our community and we don’t agree with that, especially when he takes away from education and diminishes democracy.”

For Post and the rest of the protesters, the ulitimate goal is to have the university rethink their choice.

The group has been passing petitions around campus to halt the arrival but as of now, GVSU administration has no intention of changing plans.

“It is tradition for Grand Valley to invite the state’s chief executive to participate in at least one major university event such as commencement, convocation, or groundbreaking during their term of office and since 1961 every Michigan governor has done so,” said Matthew McLogan, Vice President for university relations. “We look forward to welcoming Gov. Snyder to commencement; in his comments to me, the Governor has been very complimentary of Grand Valley’s academic reputation.”

The group will be holding different protests around campus in the coming weeks so for more information about the protests and other news from the group, visit their Facebook page at GVSU Students to Protest Rick Snyder for Commencement Speaker or to sign the petition visit http://www.ipetitions.com/petition/gvsureplacesnyder/.