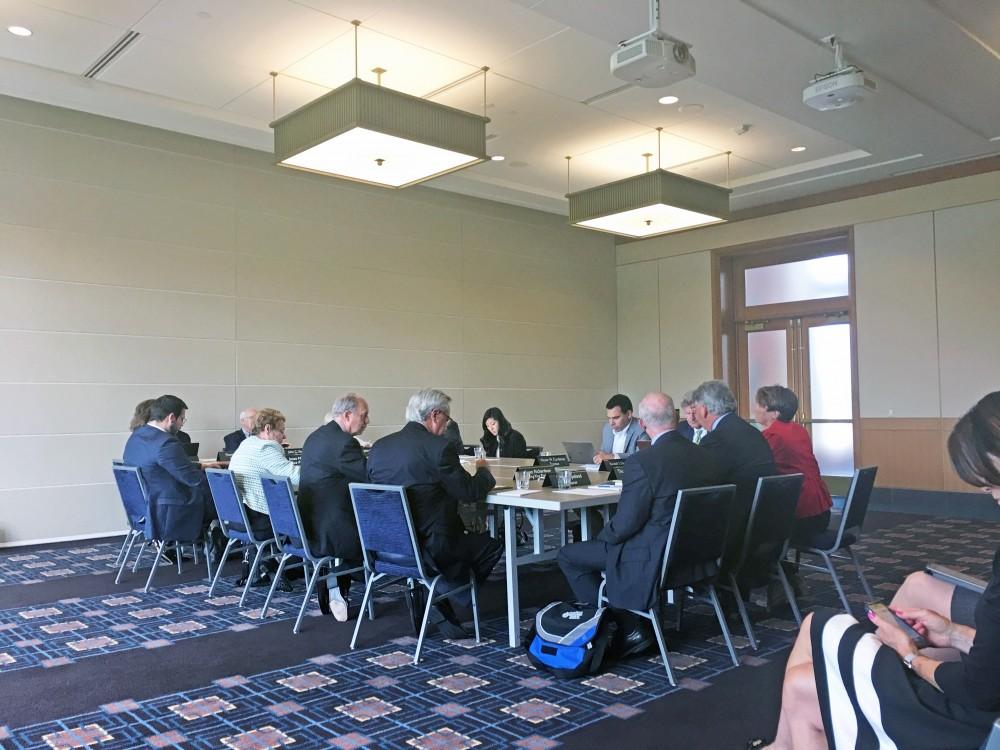 GVL / Kayla Tucker The board of trustees, college president and other administrators met today and unanimously approved the real estate transactions up for discussion on Wednesday June 21, 2017.

Five properties were up for discussion: one in Grand Rapids, one in Allendale and three in Walker.

The Board approved the $6.5 million purchase of the Ferris Coffee & Nut property, which consists of 2.7 acres and a 63,385-square-foot facility. The coffee shop company is in the process of moving to a different facility, and the space will be available to GVSU by the summer of 2018.

This will save the university money, as the original plan was to renovate a current building on campus for an estimated $7.5 million.

“The university has a facility on Watson Street that is much older than this one and much smaller, so our conversation before this became available revolved around renovating and expanding that facility, but that would have been a much more expensive solution,” said Paul Plotkowski, dean of the GVSU Padnos College of Engineering and Computing.

“We’re calling it an ‘Innovation Center,’” Plotkowski said. “There’ll be project labs to be able to design and build all kinds of great stuff.”

Plotkowski said the center will also have a Graduate Center, computer labs, faculty offices and space for K-12 outreach.

The Board also approved the acquisition of 4.8 acres in the city of Walker. The owner of the three combined properties is selling two and donating one to GVSU. The two parcels being purchased for a total of $1.6 million are located at 411 Standale Plaza Dr. NW and 449 Kinney Ave. NW off of Lake Michigan Drive.

The parcel donated to GVSU consists of 2.5 acres at 475 Kinney Avenue NW.

The three properties at this location consist of retail space and parking lots. The university plans to keep renting to the tenants at the space, keeping the purchase in agreement with the city of Walker as well. The deal will offer 400 additional parking spots for students along the current 50 bus route.

“Many students already park behind the fire station; this just adds to the parking,” said Tom Butcher, vice president and general counsel for GVSU. “The Laker Line bus stop will stop at the corner of Kinney and Lake Michigan Drive right at the traffic light there, so it will be very convenient.”

The Laker Line is a proposed bus route that will travel between GVSU’s Allendale and Pew campuses and through to the university’s health campus downtown on Michigan Street. The Laker Line is expected to be implemented in the fall of 2019.

The final transaction to sell a property in Allendale was also approved. The college purchased the condominium, located at 3951 River Ridge Court, in 1987 to temporarily provide housing for visiting faculty and international visitors, as well as to hold meetings and small retreats. Since the construction of the Alumni House, which has four overnight accommodations for guests, and the service of the local hotel Sleep Inn, the use of the condominium is no longer an asset for the college.

The 2,400-square-foot condominium has three bedrooms, two-and-a-half bathrooms and a two-stall attached garage and will be sold for a market value price.