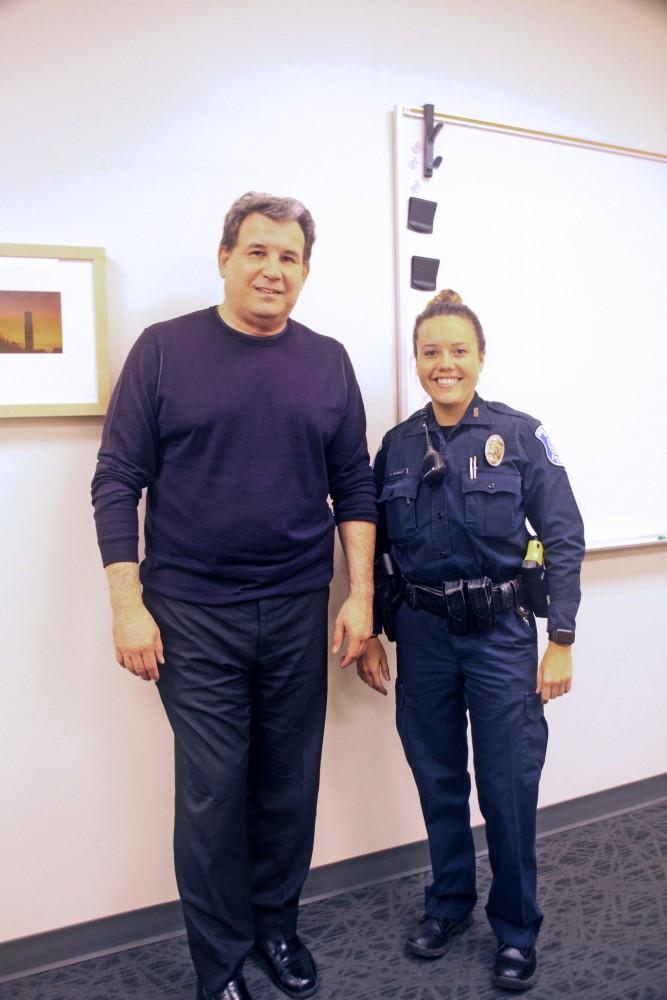 In an effort to promote health and safety while raising awareness to students, Klingensmith and Howard encouraged an open conversation about students’ knowledge and experience regarding the drug.

Marijuana is a combination of Tetrahydrocannabinol (THC) and Cannabidiol (CBD). THC is the psychoactive compound and produces a high when used. CBD helps those who seek marijuana for medical reasons including anti-nausea and anxiety.

Marijuana is usually smoked because of its fast absorption, relaxing the brain in seconds, which makes the person more likely to use again. However, it can also magnify feelings of tension or stress in what some like to call a “bad trip.”

Another form of absorption includes vaping which produces the same high but goes undetected. The drug can also be laced in food, which are referred to as edibles, and can take 30 to 40 minutes to kick in, causing the user to eat more and overdose because the absorption is not quick enough.

Klingensmith also mentioned Colorado’s new law passed. He said that the state has demanded new packaging for edibles. For example, previously, marijuana laced Kit Kats would have the same packaging, but be spelled with a ‘c’. Children were getting a hold of what they thought were their favorite candies and were later hospitalized for overdoses.

Besides creams and topicals, the consumption method Klingensmith is most worried about is the oils, waxes and resins, which are even more subject to abuse due to their high concentration of THC.

Klingensmith also said that other general symptoms may involve changes in brain function, difficulty telling passage of time, elevated feelings of fear or anger (in high doses), increased heart beat, red eyes, blurred vision, dried out lips, mouth and throat and effects to the immune system. Regular marijuana use may also affect fertility, where men may produce less sperm and women may not ovulate normally.

Klingensmith said marijuana use usually starts out small. Students start from a little bit every so often, to every weekend, to every day and begin to build a tolerance to need the drug throughout the day and turn to a higher concentration where it becomes a priority. Marijuana use typically keeps the person impaired for six to eight hours after use, and potential withdrawal symptoms include sleep problems, irritability and impacts academic performance.

Regarding the votes for recreational marijuana use, Klingensmith reminded students of the laws and to know the laws for their future careers. Should the law pass, people under 21 still cannot smoke, healthcare workers and federal employees cannot use, and smoking, using, and possession on campus is illegal.

“University policy is not going to change around this.” Klingensmith said. “Even if the state says it, because we are federally funded, the same policies are going to be in place no matter what. I’d have the same conversation with people if it does pass, about being safe and responsible.”

Howard described the dangers of driving while under the influence of marijuana during the event. Although only 30 percent of people believe driving while high is dangerous, Howard said it still impairs judgement and reaction time.

Howard said that in terms of legalities, an officer can pull over a vehicle when they smell marijuana and have the right to detain you and search your vehicle. They can also run sobriety tests including the walk and turn test, one-legged stand and more.

If charged for the possession of marijuana, Howard said the user will be put on probation, usually for two years. If probation is violated, the probation officer will be contacted and jail time generally follows. Howard also discussed amnesty, which is calling the police for concern over yourself or your friend, where you will not be penalized.

For those who are struggling with substance use issues, Klingensmith said that the University Counseling Center offers services to support students.

“[If you are seeking help] students can come to the counseling center — if a friend or themselves are a Grand Valley student, they have that source available to them free of charge.” Klingensmith said. “We are happy to talk to students who use a consultation, or if they want to get into treatment, we have individual or group counseling for substance use.”