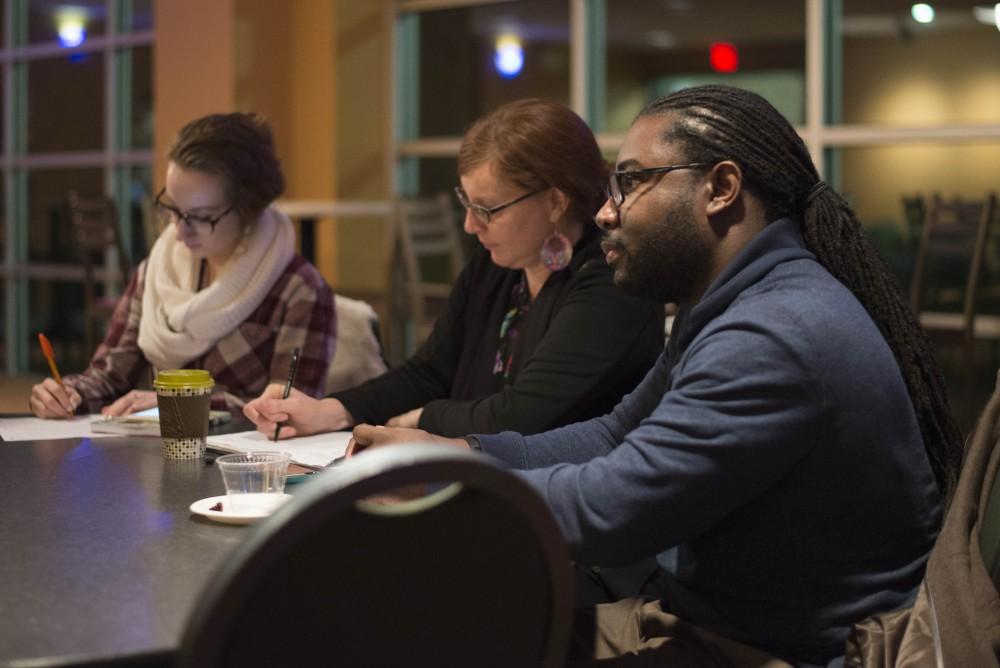 The last of several post-election town hall meetings, sponsored by the Grand Valley State University Division of Inclusion and Equity, Community Service Learning Center and student senate, was held Monday, Jan. 23, in the Kirkhof Center Thornapple Room. Students, as well as educators and directors, gathered to discuss tactics for moving forward after the 2016 presidential election and 2017 inauguration of President Donald J. Trump.

Over the course of the fall 2016 semester, members of GVSU’s community engaged in numerous political affairs, including rallies, marches and campaign events, while awaiting the election and inauguration of the next president of the United States. Once this waiting period came to an end, the town hall meetings served as an opportunity for GVSU community members to voice their opinions, process their emotions and ask, “What now?”

“Our hope was to provide students with a space to think of ways they can organize themselves and continue to participate in the democratic process, even beyond the election,” said Melissa Baker-Boosamra, associate director of student life, civic engagement and assessment.

The topics discussed during the town hall meetings were merely portions of a much broader national conversation already in place. Attendees talked about the difficulty of discerning credibility when so many news sources seemed to lean either right or left politically.

Participants also had the opportunity to experience both sides and take in new perspectives.

“We hear from those in agreement with the protests and marches and also from those who are very happy with the presidency,” said Relando Thompkins-Jones, the social justice educator of the Division of Inclusion and Equity.

The town hall was open to GVSU community members of any view point, and any concerns and hopes for the future were open to discussion.

“People need to get outside their thoughts and listen to understand, learn from each other,” Thompkins-Jones said.

Baker-Boosamra hopes GVSU students will not only discuss their political opinions but will also think about how they can apply those opinions through democratic action.

“The big picture here is we want Grand Valley students to think about their role in our democracy: what are you going to do and what are your responsibilities within a democracy?” Baker-Boosamra said.

Thompkins-Jones said no one is exempt from the conflict in the U.S., and understanding the democratic system and the issues the country faces has never been more crucial.

“One of the reasons we came together for this series is to check in and see where everybody is post-election and create an opportunity for people to process,” he said.

A follow-up series is currently being developed with the intention of going beyond discussion to a more focused approach. Students may experience exactly what democracy looks like and use that frame to talk about contemporary political issues.

Baker-Boosamra said the idea of civic learning and democratic engagement is part of a much larger movement happening across the nation.

“We are at a time where we can’t take our freedoms, or our political system, for granted,” she said. “It’s a critical time for students to take political action and stay engaged.”