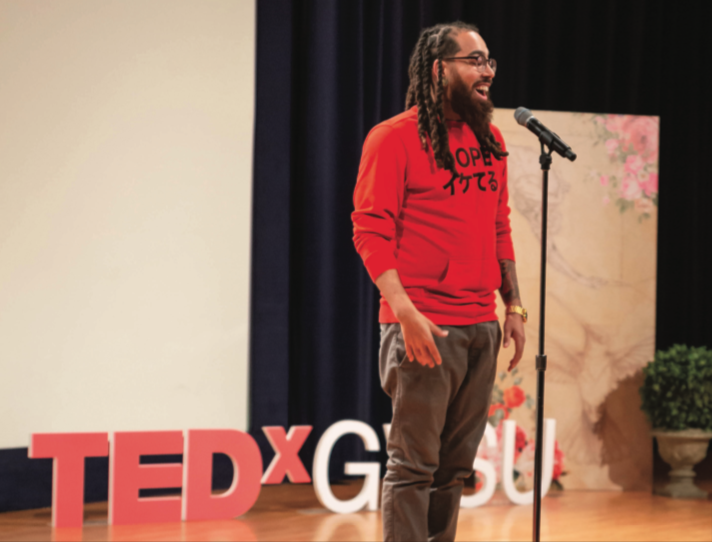 The event was sponsored by GVSU’s Design Thinking Academy, WGVU and the Dean of Students’ Office.

TEDxGVSU Director of Speakers Jordan Punches described that the theme – “Grow” – would be spoken about in different ways. Each talk funneled the theme through the speakers’ experiences to create a range of topics from storytelling to self-love.

“The ideas that you hear tonight: there is passion behind those,” Punches said. “These are ideas that (the speakers) have culminated their whole life, and tonight they’re here to share them with you.”

The theme builds on “Blueprint” and “Shape,” the themes from the last two years. Director of Marketing and Creative Jaclyn Ermoyan said that the theme even applies to the growth of TEDxGVSU and its improvement this year.

“I think ‘Grow’ means something different to everybody,” Ermoyan said. “That’s one of the reasons why we chose it as the theme for this year… We can talk about plants a little and the natural idea of starting small and becoming bigger, but it can be more than that… It’s important to me because I love self-development and self-improvement and growth of myself individually is important to me.”

Sieger said she thought it was important for people to understand what has happened in their lives influences how they move forward. Her past experiences with racism and experiencing the Detroit Riots (which she prefers to be renamed to the Detroit Uprising) molded her views of activism and equality today.

“My growth was to continue to learn and to talk to people and understand the experiences that I’ll never have so that I can not be so righteous,” Sieger said. “While things are good in many ways, some things are still not so good.”

TEDx events often feature a variety of talks, videos and performances. Price, who performed a poem about coming to terms with his biological father not being a part of his life, said that ‘Grow” strikes a personal chord to him.

“I’ve definitely been many different human beings,” Price said. “What got me to the point of where I’m at now has been a significant amount of growth. Recognizing wrongdoings, holding myself accountable, and just continuing to be the pest person I can try to be.”

While the speeches and performances included prominent members from the community, representatives from GVSU’s campus also shared their stories. Aside from being entirely organized by GVSU students or alumni, the night included a performance by Euphoria, a GVSU a capella group.

Award-winning GVSU computing and information systems professor Szymon Machajewski approached “Grow” through analyzing failure in immersive feedback environments. A specialist on gamification, or the use of game elements in non-game settings, he discussed how the definition of failure has changed over time, but games have created a model of failure that encourages growth.

“Games teach us that failure is a precondition for success,” Machajewski said. “In games, we seek out failure and then we face joy when we learn to conquer failure.”

“When a student comes up and tells us that math is too hard or science isn’t their subject, we’ve failed to show them how the arts plays an important role in the process,” Smutny said.

The event was a huge collaboration between the community of Grand Rapids and GVSU, said TEDxGVSU Adviser David Coffey, who noted that the real heroes of the night were the organizers and volunteers who made the event what it was from the ground up.

“It’s a huge deal,” Coffey said. “This is really about the students and the alumni who come together to make this work.”