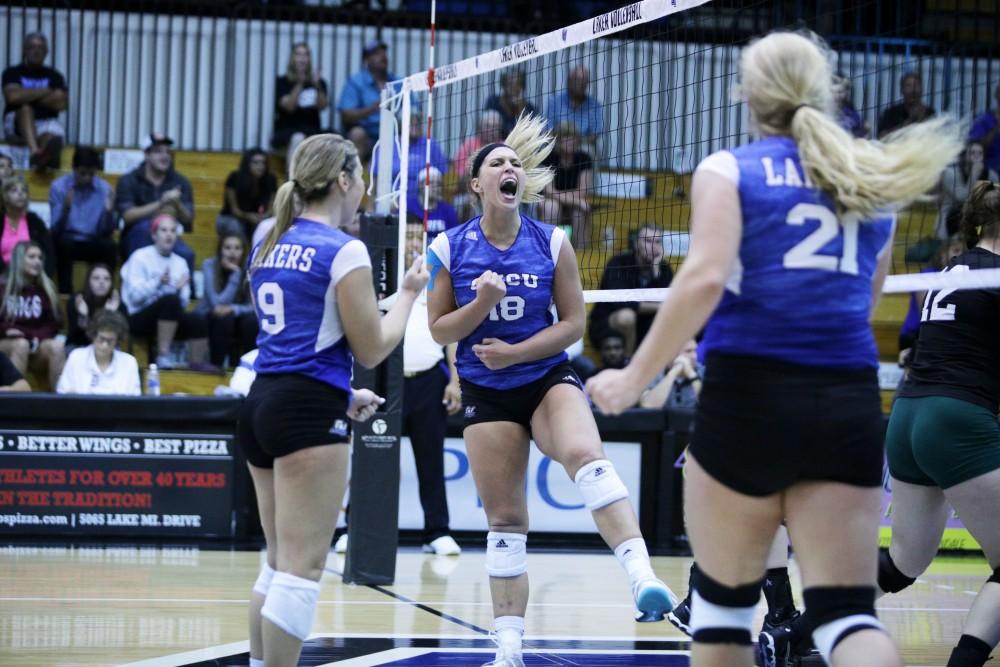 The Grand Valley State women’s volleyball team earned themselves another win after competing against the Warriors at Wayne State Saturday, Nov. 4.

GVSU played strong in a tough match that ultimately drove the Lakers to securing the victory with a final score of 3-2.

The well-deserved win earned the Lakers’ first place in the GLIAC South Division and moved their overall record to 15-10, while their GLIAC conference record was moved to a successful 10-4. The team’s recent success has brought a new sense of energy to the Lakers.

“It’s very exciting,” said junior standout Staci Brower. “It puts us in a better place for regional rankings and being able to handle postseason. It was a huge win for us tonight, and so now we’re the No. 4 seat in the south, and we’re feeling very pumped up.”

It was a slow start to the match for the Lakers; the Warriors swept the first set (25-27). Thanks to a power kill from junior Shannon Winicki at the start of the second set, though, the Lakers got the upper hand they needed to end the second set (25-18).

GVSU kept their momentum alive into the third set to grab a 25-18 victory, taking an early 2-1 lead in the match.

But the Lakers couldn’t pull away with the win just yet as the Warriors put up a fight in the fourth set, pushing the GVSU defense to its limits. GVSU came up short in the set, making it a 2-2 tie heading into the decisive fifth set.

The pressure was high for the Lakers at the start of the fifth set as the winner of the set would ultimately win the match 15-10. The Lakers came together as team to close out the final set. Kills from Jillian Butsavich and Winicki secured the fifth-set victory and the 3-2 victory in the match.

All around, the Lakers were just happy that their efforts resulted in another “W” in the win column.

“It was a good match,” said Deanne Scanlon, GVSU head coach. “It was like every day isn’t easy cause it was a battle for first place, and so nobody ran away with it. It was kind of a slug fest all night, but I thought our kids just really battled.”

For the players, they knew the win would place them in good positioning in the postseason, and they delivered.

“Everyone did their job in order to get us that win,” Winicki said. “A good team effort altogether cause we knew that had to come out with a win to put us in that good place for regional rankings.”

Brower led the squad with five blocks while also collecting 11 kills of her own. The junior middle blocker also picked up four digs and an ace. Brower believed the team’s success on the service line led to the victory over the GLIAC rival.

“I think we started serving a lot harder, which made it difficult for their offense to be in system, so it was a lot easier for our defense to be able to play around once we got them out of system,” Brower said.

With playoffs just around the corner, GVSU volleyball is switching gears in preparation for the GLIAC Tournament. Along with the championship in the back of their mind, the Lakers are focused on going into playoffs with a top lead.

“We want to go in with the highest seat that we possibly can,” Scanlon said. “So that means we got two home games next weekend that we got to take care of those and position ourselves in the best positions that we can going into conference tournament.”

The Lakers will be back at the courts to close out the regular season at their home court Saturday, Nov. 10, against Purdue University Northwest and Sunday, Nov. 11, against Davenport University.