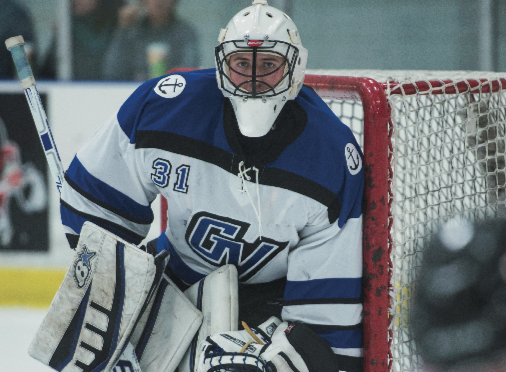 “If we play our hockey, we’re a really hard team to beat,” said Grand Valley State DII men’s hockey coach Carl Trosien after a loss to Trine a couple of weeks ago.

Apart from a 27-second stretch midway through the first period, the Lakers held the Adrian Bulldogs scoreless en route to a 3-2 victory over their in-state rivals from a short drive down the road.

“It feels good, just because of last year and how that game ended,” said goalie Jared Maddock. “It feels nice to get a win that helps us in the rankings and help build momentum for us going forward.”

GVSU ended their season on a 4-3 overtime loss to Adrian in the playoffs, which also ended a 15-game winning streak. This time around for the Lakers, the results felt a lot sweeter.

While the victory sits well with the Laker hockey faithful, Trosien still sees plenty of room for improvement.

After a point blank goal from senior forward Tommy Carey set up by a quick snap-pass from junior forward Nick Beers, the Lakers’ play turned sloppy, accumulating three penalties in under two minutes.

Those three penalties, one for a quick brawl near Adrian’s goal, one for hooking and one for slashing, led to two short-handed goals scored by Adrian near the 10-minute mark in the first period that briefly gave the Bulldogs the lead.

It did not last for long however, as sophomore defenseman Howie Rose scored with 2:39 remaining in the first period to knot the score at two apiece.

In the second period, GVSU and Adrian traded shots back and forth, matching each other with 13 shots apiece, but GVSU found the back of the net on a wrist shot from sophomore defenseman Avery Hill that ricocheted off a Bulldog into the net to move the Lakers ahead 3-2 with 15 minutes to go early on in the second period.

Going into the third, Adrian turned up the aggression a few notches on offense but was once again held scoreless, mostly due in part to goalie Jared Maddock doing his best brick wall impersonation.

“Jared’s a heck of a goaltender. He rebounded well after that first stretch,” Trosien said. “He’s a big body and tonight he read the puck really well and knew when to go out and challenge shooters and that was a big reason why we came away with a win tonight.”

Moving forward, Trosien wants to focus on maintaining momentum and raking up wins in the next three weeks before the Lakers reach Christmas break.

“Our focus right now is staying healthy and raking up dubs throughout those nest three weeks leading up to Christmas break,” Troisen said. “We got tomorrow (at Adrian) and then hopefully we can get at least five out of the next six and we should be sitting good.”