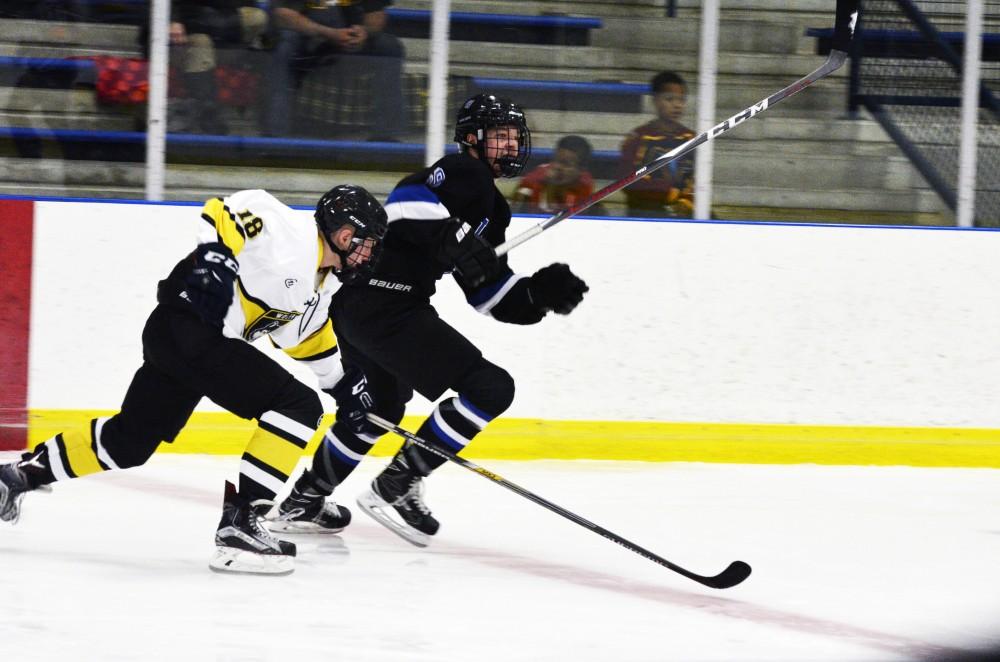 The Grand Valley State men’s club hockey team swept the Indiana Hoosiers this weekend with 5-4 and 3-2 victories on Friday, Jan. 18 and Saturday, Jan. 19.

The Lakers entered the weekend on a six-game losing skid, dating back to Dec. 1, but after back-to-back wins on the road, the team appears to playing their best hockey of the season.

“We played really well,” said head coach Carl Trosien. “Our overall team play, chemistry and bench energy were really good this week. I think we really turned a corner as a team.

Heading into Friday’s game, the Lakers game plan was to control the puck. “We did that and our time of possession was really good.”

Despite controlling the puck and getting numerous shots on goal, the score was tied after the first period. That changed five minutes into the second period when freshman Trevor Zenas opened the floodgates with a rebound goal.

That was soon followed up with a goal by senior Danny Smith after an assist from sophomore Cameron Dyde. The Laker flurry didn’t stop there and with four minutes left in the period, senior Thomas Luzynski found Zenas for his second goal of the night.

“My teammates did a really nice job setting me up and I started to take advantage of my chances in the second period,” Zenas said.

Down 3-0 late in the second period, the Hoosiers began to fight back, scoring four unanswered goals and taking a lead midway through the third period.

“It was an emotional roller coaster,” Trosien said. “We had some breakdowns while we were in the penalty that cost us.”

The Lakers returned with back-to-back power play goals by junior Nick Beers and Dyde to give GVSU a 5-4 victory.

“We were the better hockey team for most of the night and Trevor (Zenas) played really well for us,” Trosien said.

Heading into the second game of the doubleheader, GVSU simplified their offensive attack and it made all the difference.

Early in the first period, Luzynski found Zenas again for one of his two goals on the day, giving GVSU an early 1-0 lead.

“I made a good move and capitalized on it,” Zenas said.

The Lakers continued to control the puck for the majority of the game and they took a 2-0 lead into the third period after a Danny Smith assist and Cameron Dyde goal. The score would only hold for a few minutes as the dynamic duo of Luzynski and Zenas connected on their second goal of the game, giving the Lakers a 3-0 lead.

The Hoosiers responded with two goals of their own, cutting the lead to one with three minutes to play. After a couple of Hoosier shots on net in the closing minutes, the GVSU defense would hold and go on to win the game 3-2.

“Our goaltenders played really well this weekend and the majority of the goals they gaveup were on power plays,” Trosien said.

Following their two road wins against Indiana, the Lakers overall record improved to 12-9-1 on the year.

“Everyone is buying in and we are working harder to try and build off that momentum,” Zenas said.

The first game of GVSU’s upcoming home-and-home doubleheader will be played at the “Pack the George” event at the Georgetown Ice Center at 8:30 p.m. on Friday, Jan. 25 against Michigan State, then the Lakers travel to MSU for a Saturday night 6:30 p.m. puck drop.