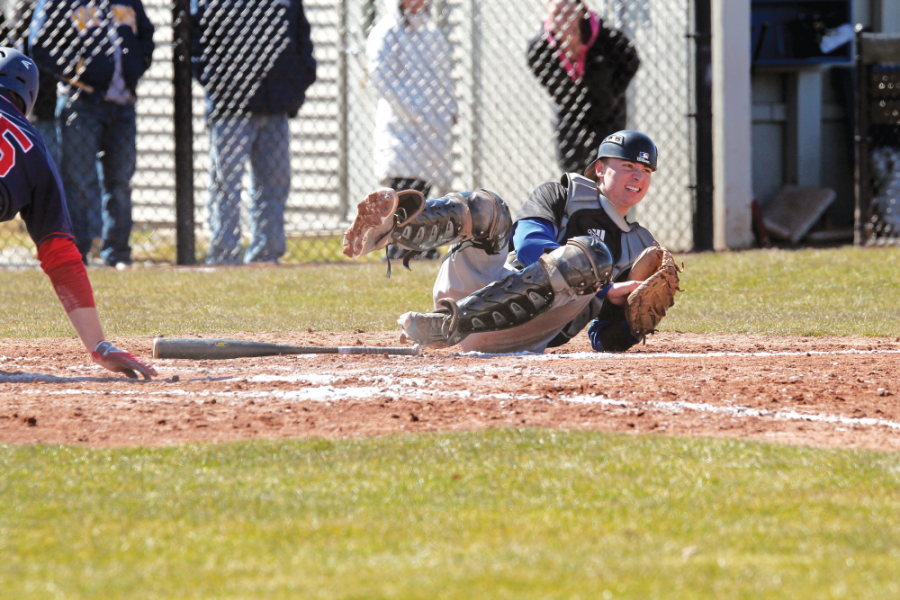 Playing baseball at the college level is all about opportunity, and, as a freshman, opportunities are limited. With the possibility of being assigned a redshirt or spending a year behind someone with more experience, a first-year player must make a quick impact to earn playing time. Sophomore catcher Connor Glick was given that opportunity as a freshman last season on the Grand Valley State baseball team, and he made the most of it.

As a preferred walk-on, Glick joined the team in the fall before the 2015 season. On a team with three other catchers, Glick was slated to be the third-string catcher for the season.

“He was continuously making progress; he just wasn’t quite where we needed him to be, to be a finished product,” said GVSU head coach Jamie Detillion about Glick’s preseason status.

On a college baseball team, having two quality catchers is a must. Since catcher is one of the most physically demanding positions on the diamond, playing both games of a doubleheader is not ideal for the player or the team.

As the third-string catcher, it looked as if Glick would use his freshman year to gain experience for the next season. But, after one of the catchers in front of him quit the team, Glick was thrust into a spot that included frequent playing time.

“At first I didn’t know how much I was going to play,” Glick said. “When I got my shot, I made the most of my opportunity.”

In the second series of the 2015 season, Glick made nine plate appearances. He finished the weekend with five hits, including his first collegiate home run, a two-run double and a walk-off single to cap off the series. After that weekend, Glick filtered in as a regular starter for the Lakers.

“He kept working his butt off and he turned himself into a pretty good player,” Detillion said.

Glick became one of the most consistent bats in a Laker lineup that included names like Kevin Zak and Jamie Potts, both players enshrined in the GVSU record books. Zak mashed 18 doubles that season while Potts accumulated 82 hits the prior season.

“I had a lot of older guys to look up to and to learn from,” Glick said. “I just wanted to be on their level.”

Glick may not have gotten exactly on the level of Potts or Zak, but he came close. As a freshman, Glick finished the season with a .368 average and a .429 on-base percentage to go along with three home runs.

This season, Glick is slotted in the middle of the GVSU lineup and is expected to produce for the Lakers (4-3 thus far in 2016). Often, teams are forced to sacrifice offensive production in order to have a solid defensive catcher, but Glick gives the Lakers the luxury of having both.

Sophomores are not often perceived as leaders on a team, but Glick’s freshman campaign built confidence for himself and from his teammates to be a leader on this Laker team.

“As a freshman, you come in and all you want to do is play. You realize it’s not about you playing, it’s about the team winning and he developed confidence through his freshman year of playing well and that has carried over into this year,” said GVSU second baseman Josh Smith.

Glick will look to build off of his freshman season, and, if he continues to progress at a fast rate, the name ‘Glick’ might show up next to ‘Potts’ and ‘Zak’ in the near future.