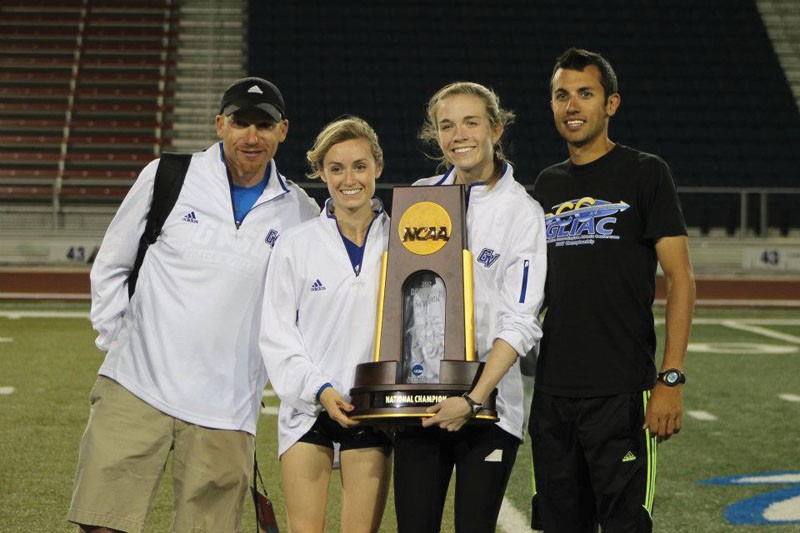 It has been penned many times that it’s not how you start, but how you finish. Allow it to be penned once more.

Cliché yes, but it would be difficult to tell the tale of a record-breaking track and field athlete, and Grand Valley State University’s current distance and 800-meter assistant track and field coach Nick Polk’s story, without employing the phrase.

For Polk, the start to his race was modest at best. Enrolling at GVSU from Indianapolis high school Perry Meridian in 2003, it would be seasons before Polk hit his full stride.

For two and half years, he grappled with the adjustment. Injuries didn’t make the process for him any easier. Lucky for Polk, his run was only just beginning.

For two seasons, he ran professionally at ZAP fitness in North Carolina with former teammate Nate Peck. He eventually got the running bug out of his system and decided it was time to turn back for home.

After Polk was hired in 2011, his second stay at GVSU got off to a much more auspicious start. Only two years in, Polk has already extended his legacy by helping guide 29 All-American athletes, a Division II national champion and record holder (Betsy Graney, 3,000-meter steeplechase – 9:53.85) and three Division II national championship teams (indoor track & field 2011, outdoor track & field 2012, and cross-country 2012).

“As a coach, Polk is great,” said freshman distance runner Katie Shaheen. “He is like the boss who is all business, but has those casual Fridays that are actually enjoyable. I think for someone to even say that they like their coach is a big deal. I’m comfortable being coached by him and learning from him as well as being able to relax and makes jokes when needed.”

GVSU Fieldhouse Arena office room 97, although small, is shared by two occupants – GVSU head track and field coach Jerry Baltes and Nick Polk. In an office that size, the decade long relationship is put to good use.

“It’s been comforting having someone that knows our system, knows me, knows how I operate and knows the ins and outs of the program,” Baltes said. “He’s very reliable, easy to trust, and I know if I’m not there to make the decision, he’s going to make the right decision for the program.”

Already successful as a young coach, the future is wide open for Polk, who might one day follow Baltes lead and pursue a program of his own. For now, he’s happy and proud to remain a Laker. Coaches and athletes alike are glad to have him on board.

“He understands both sides,” Baltes said. “He’s been very, very successful. He’s also been on the other side, been through injury and setback and frustration. He can relate to all of our student athletes.”

The whole journey so far, inclement start included, has been paramount.

“From my prospective it is important for athletes to have a coach who has been in their shoes and had similar competitive experiences,” Polk said. “Hopefully my successes and failures as a student athlete improve my ability to relate to the highs and lows that each athlete will go through throughout the course of their careers.”

If a few more records happen to fall along the way, all the better.

“It’s really cool to use the knowledge that I gained as a professional runner, as an athlete at Grand Valley and use it for the kids now,” Polk said. “It’s just as fulfilling to have one of those guys break one of my records as it is to do it myself.”