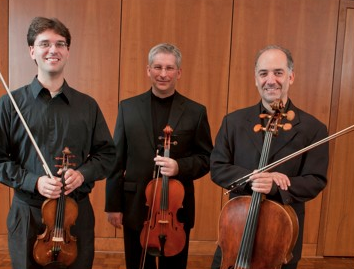 On Tuesday, Jan. 22, Grand Valley State University professors Paul Swantek and Robert Byrens performed a concert comprised of works from 20th century American and British composers. The concert took place at the Sherman Van Solkema Hall in the Haas Center for Performing Arts. This is one of many faculty showcases that GVSU’s Department of Music, Theatre, and Dance have organized throughout the year.

Paul Swantek has held the position of principal viola with the United States Air Force Strings, played for several levels of the U.S Government and performed for every president since President George H.W. Bush. He is a violinist with the Grand Rapids Symphony and an affiliate professor of viola and music education at GVSU.

Robert Byrens has been a part of GVSU since 1990, where he serves as a vocal coach and faculty pianist. He is also currently the rehearsal pianist and vocal coach for Opera Grand Rapids. Byrens holds nearly 50 years of experience as a concert artist.Byrens said that he and Swantek “presented an artist faculty recital for our students and community and this was our first performance together as a viola/piano duo.”

“We first discussed performing together last year and began planning this concert during the winter semester,” said Byrens. The concert consisted of two works by two 20th century composers that focused on viola and piano.

“Paul suggested four different larger viola/piano works and then we narrowed it down to the two sonatas by Rebecca Clarke and George Rochberg,“ said Byrens. “They are both major works in this musical genre…Both composers created such fine music to showcase the wide range of technique and expression that our instruments are capable of producing.”

Byrens said that his past as a violinist contributed to his enthusiasm about the concert, saying that he was “very excited to learn both of these compositions having never studied them before.”

“As a pianist, I find both sonatas to be challenging from a technical point of view. They pushed me to step outside of my usual vocal repertoire specialty,” said Byrens. “In this manner they were very good for my continued musical growth as a performing artist.”

Byrens further explained how these concerts impact his growth as an artist.

“Even though I’ve been performing concerts for nearly fifty years, I never tire of facing new challenges and pushing myself to continually improve my artistry,” said Byrens.

“As university professors, we are all mentors and role models for our students. I think performing concerts is a great way to teach our young students to strive for musical excellence and to witness part of our musical journeys,” said Byrens.

Byrens explained that observation is an important tool for the practicing musician. “I learned more from observing my master teachers perform than from books or the classroom.”

GVSU’s Department of Theatre, Music, and Dance have several more faculty-lead performances coming up throughout the semester. Admission is free.