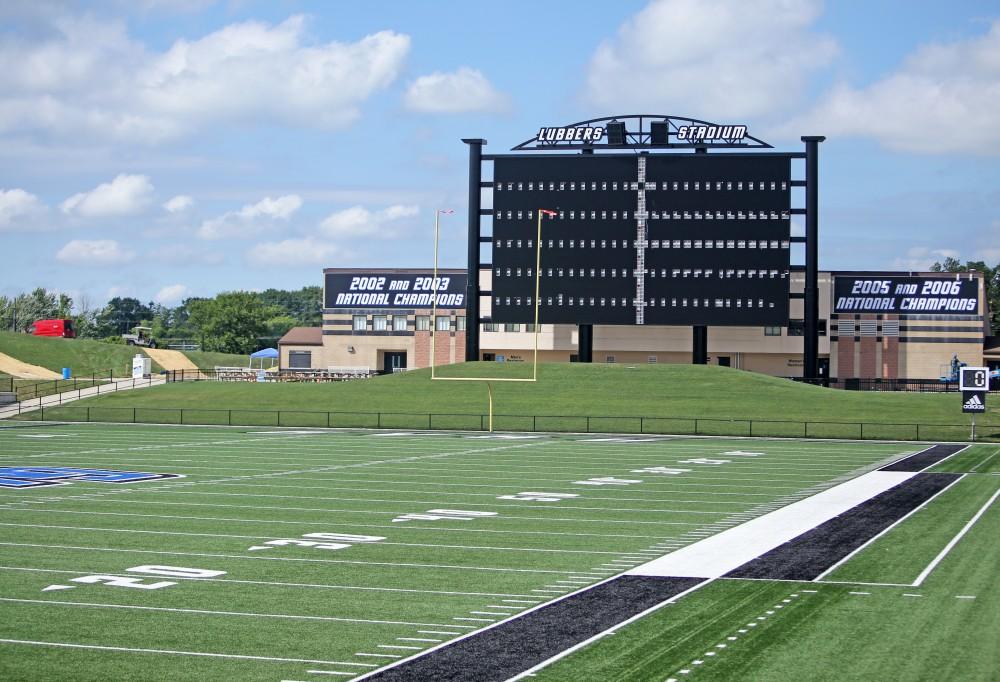 In the fall, Saturday night football at Lubbers Stadium is a tradition not only for Grand Valley State students, but for West Michigan. Lubbers Stadium has led the nation in attendance for Division II the last four years. Fans come not only to see quality football, but for the fan experience, and this year, GVSU has made two improvements to that fan experience.

The first addition to the fan experience is the new video board in Lubbers Stadium. The upgrade has been a topic of discussion for a couple of years in the athletic department.

“We started talking about the need to replace the video board about two years ago,” said Brad Wallace, GVSU’s director of athletic and recreational facilities. “The old board was not functioning as it should, and securing service and replacement parts were proving to be a challenge.”

The construction on the 40-foot tall, 72.5 foot wide screen will be completed just in time for the Lakers’ first home game Sept. 1.

“From start to finish, it was a tight timeline,” Wallace said. “These large boards take time to construct, and the stadium itself needed some infrastructure upgrades to support the board and possible future stadium improvements.”

In comparison to last season’s video board, the new screen will be nine times larger. But size is not the only upgrade.

The 977,408 pixels on the board offer more resolution than a high definition television, and the 24,000 Hertz gives the board a refresh rate 100 times faster than a standard television. The board also features a 9,000 night brightness-level which will allow for the board to still be effective during day games.

The second addition to the fan experience will occur before each home game, in the newly formed Tailgate Village. Tailgate Village, presented by 48 West, will give GVSU students a better opportunity to experience pregame tailgating.

“We are extremely excited about the opportunity to bring our most loyal students together in one area, closer to all the game day action,” said GVSU’s community relations director Kelsey Penland.

Tailgate Village will be located in the middle of all the game-day action in Parking Lot C West. Students will be closer to the GVSU cheer and dance teams, as well as the marching band. The village is also located next to the Laker walk, where the football team makes its way to the stadium. Along with being closer to the action, students are subject to giveaways and free food.

“The support we receive from (the) Laker nation is unmatched in DII, and they deserve to have a better space to tailgate at home games,” said Doug Lipinski, GVSU’s deputy director of athletics – external operations.

Admission into Tailgate Village is sold as a season pass (six home games) and not for individual games. Season passes are available at the ticket office located in the Fieldhouse Arena.

The new additions will make for a better experience for the fans this season to cheer on the Lakers, the second ranked team in the nation according to the 2016 Sporting News preseason national poll.