‘We Stand with Mizzou’ 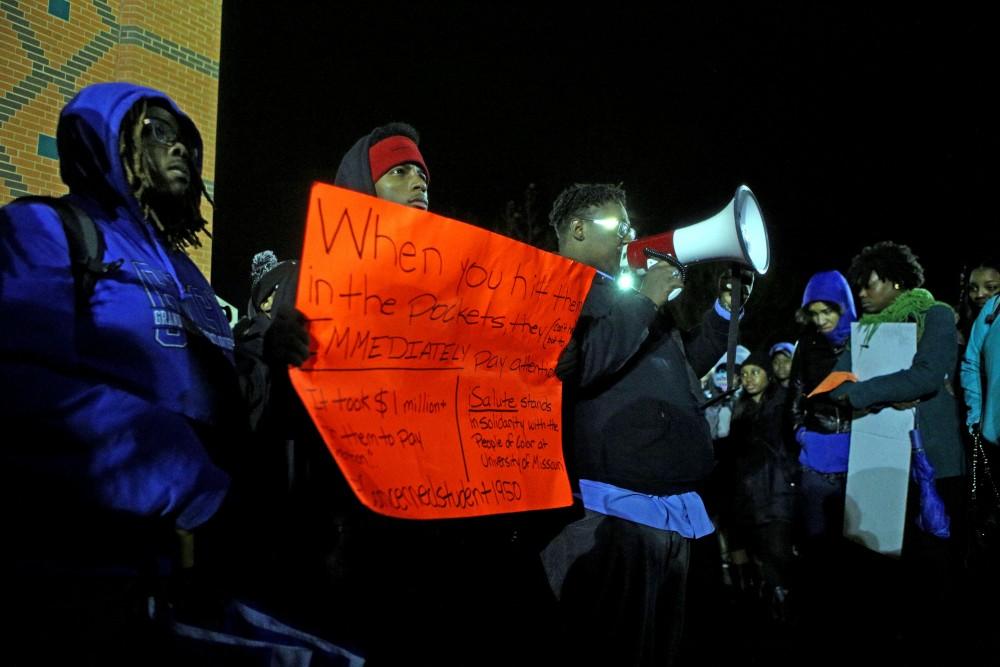 Prayers, poems and pressing gales of wind surrounded approximately 300 members of the Grand Valley State University community as they took part in a “We Stand with Mizzou” demonstration Thursday night.

After a series of racially charged instances plagued the University of Missouri campus in Columbia, Missouri, students protested in a variety of ways last week. One student went on a week-long hunger strike, and members of the MU football team refused to play in their next game unless the university’s president resigned. Since then, the MU president and highest-level administrator have stepped down.

“All students should be able to attend the university of their choice, without harassment, danger, and distraction,” said Kim Jones, president of the GVSU chapter of the NAACP. “Nothing should interfere with our ultimate goal, which is gaining a higher level of education.

“We are taking a national stand against systematic racism in predominantly white institutions,” she said. “We hope to continue to challenge injustice and confront any issues at Grand Valley State University as well.”

The event began with a silent march from the Kleiner Marketplace to the Cook Carillon Tower, where members of many cultural-based student organizations read statements supporting their fellow students at MU.

“It could have been us,” said Brianna Pannell, president of the Black Student Union at GVSU. “As students at a predominantly white institute, it is fairly difficult to have an identity that can both fit into our environment and our culture. “

Among the large crowd were multiple members of GVSU administration, including President Thomas Haas and his wife, Marcia.

“I was looking to my left and right, and not only are there students out here, but President Haas and his wife and a few members of his cabinet are, too,” said student senate President Maddie Cleghorn. “These are people who have tons of things to be doing right now, but they’re all taking a moment to stand in solidarity and support. I hope Mizzou sees this and are encouraged by it.

One of main grievances of the students at MU is that while incidences of racism were reported to authorities, the university’s administration did not respond. The story was quite the opposite at GVSU, where administrators even helped provide lighting for the event.

Merkle was surprised at the large turnout for the peaceful demonstration, particularly in light of the less-than-desirable weather. At one point, the wind became so strong that posters and signs were ripped out of students’ hands, smacking into the Cook Carillon Tower before blowing away.

“It’s a clear indication of just how strongly students on this campus feel,” Merkle said. “The fact is that there are some really awful things happening, not just at the University of Missouri, but on college campuses all across the country, and I think this is a clear effort on the part of our students to say ‘enough.’”

The demonstration remained supportive and positive, but some GVSU students expressed their displeasure on social media. In particular, the anonymous app, Yik Yak, displayed multiple racist and derogatory posts on Thursday.

“I’m not racist but damn, I’m about to be if these protests won’t stop,” one poster wrote.

Another Yik Yak user wrote, “The way minorities handle racism gets them nowhere. If one of your own gets shot, you destroy a city. Maybe if you were all more civil, s**t wouldn’t be like this.”

However, the negativity on social media did not permeate the NAACP demonstration. Demonstrators focused on supporting each other, as well as students at colleges across the U.S.

“Student and people all over the country deal with racial inequality,” said Jesse Bernal, vice president for the Division of Inclusion and Equity. “The diversity of people (at the demonstration), and what that means for us as a campus, is fantastic.”

Jones and the other student organization leaders encouraged students at the demonstration to fill out the Campus Climate survey, which opened Nov. 12, to share their experiences as a minority student at GVSU.

As a whole, Jones said the African American population at GVSU feels administrators hear their voices, but she hopes to continue to build a better environment for students of color.

“Since we are the 5 percent here as far as blacks, we have a hard time connecting with our faculty,” she said. “Some of our struggles are different, and we don’t want to feel like token students.”

In order to bridge that gap between students, Jones encourages students to broaden their horizons.

“I want to encourage (students) to go to a meeting of an org they wouldn’t necessarily go to and see what they can bring to the table,” Jones said. “A lot of orgs are struggling with diversity, so put yourself out there. Socialize with people you wouldn’t normally socialize with and go in there with an open mind.

“We want to all support one another.”