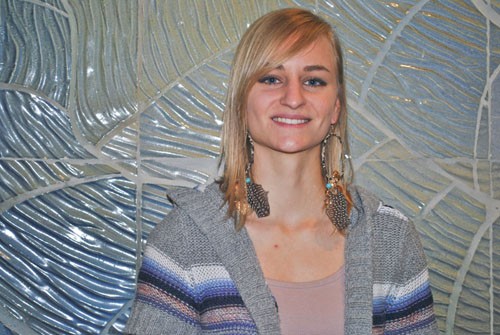 Euphoria member and Grand Valley State University senior Heather Palascek talks about finding her voice, with or without instrumental accompaniment, and music at GVSU.

Palascek tried and failed to join the a cappella group Euphoria her freshman year, but rather than giving up, she auditioned again.

“I really liked the vibe and talent that I saw in the group, and when I gathered up my courage again the next semester in sophomore year, I came back much stronger and made it into the group,” she said. “I’ve been in Euphoria for three years and I love it, so it goes to show you — don’t give up the first time someone tells you ‘no!’”

Palascek started her singing career young and has not slowed down.

“I have been singing in choir since first grade,” she said. “Any time before that was undocumented except probably by my poor mother who couldn’t get me to be quiet.”

Palascek’s mother is not the only one who’s experienced her frequent singing. Palascek’s former roommate and friend Allison Staley can attest.

“She sings all the time,” Staley said. “And she’s really good at it. She would practice every day. She’s really passionate about Euphoria.”

Staley sees Palascek as a consummate musician, and she said Palascek has nothing but respect for music.

“She realizes the importance of being an artist and the responsibility that goes along with that,” Staley said.

Palascek’s appreciation for her craft is obvious when she’s heard describing her work.

“The challenge of a cappella is that you can’t depend on any other instrument than your own voice to determine the key and the notes of the song,” Palascek said. “This requires an internal sense of applied music theory, such as pitch and tempo. If you tune an ‘external’ instrument correctly, every key you press or string you pluck will always deliver the exact same note, over and over. A cappella is a more personal instrument in the sense that you can’t manipulate it externally, so sometimes it takes a little more concentration.”

Palascek said music is what she likes best in the world, and after she graduates with an advertising and public relations degree she plans to enroll in Grand Rapids Community College’s two-year recording arts degree program. She will leave behind a school where she’s found artistic accomplishment, but she is not without criticism for her alma mater.

“GVSU is nothing in comparison to the music scene alive and healthy in Kendall and GRCC,” she said. “I think it’s because the emphasis of this university is centered much more around the health sciences than the arts. If you look at Padnos and then look at the Performing Arts Center, it’s easy to see who gets most of the money. I would like to see GVSU’s music scene grow, and would encourage the university to support aspiring artists.”

In eighth grade, Palascek placed third in a singing contest and won $20. She then became known to her classmates as “the girl who can sing good.”

“I had pretty low self-esteem in eighth grade, and that was the first time I had felt comfortable and successful sharing a talent,” Palascek said. “It grew from there.”