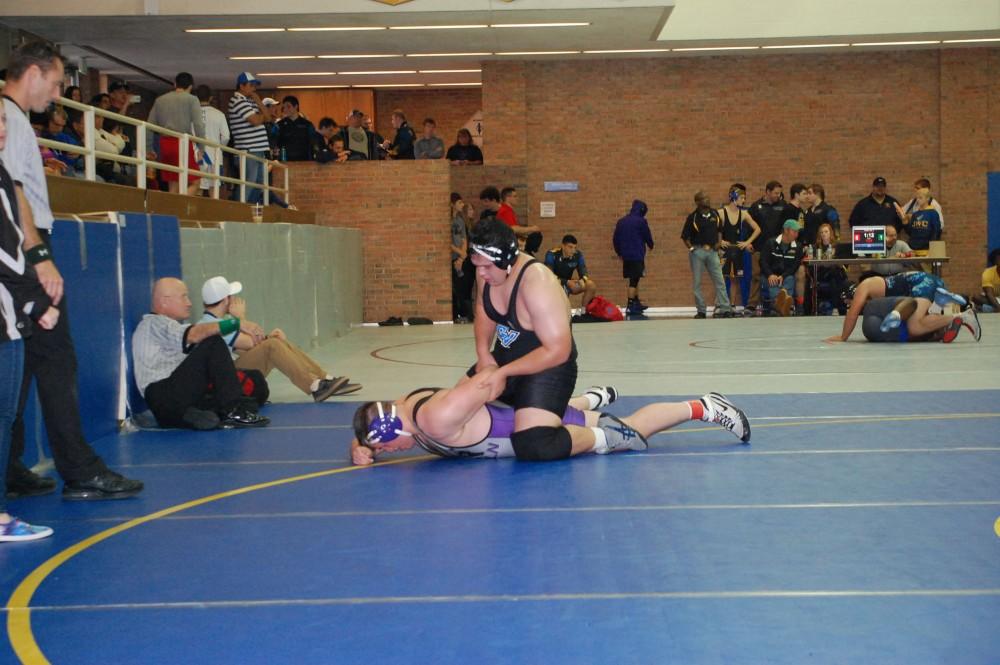 Two straight days of heavy contact can take a toll on one’s body, but the Grand Valley State club wrestling team did not allow fatigue to stop them.

After returning from their first event of the season (Fall Brawl in Dearborn, Michigan), the Lakers traveled once again to Muskegon, Michigan Friday, Nov. 4 to participate in a dual meet against the Olivet Comets (B-team) and the Lincoln College Lynx (Illinois).

The Lakers made quick work of the Comets in the first match of the night. They only lost two total matches and moved on to face a strong Lynx squad. The Lakers ran out of gas against a polished opponent, falling to the Lynx to end the night.

“The biggest takeaway I would have to say is that we have to start building up some more endurance,” said GVSU sophomore Jake Sobeck. “It’s very typical for how early in the year it is and as the year goes on it will surely not be a problem anymore.”

After a short rest Friday night, some of the Laker wrestlers returned to Muskegon the next morning to compete in the Ben McMullen Open individual tournament. This tournament has been home to some of the top wrestling competition in the state of Michigan.

Using this as a measuring stick for the upcoming long haul of a season, the Lakers struck gold twice on the day with two individual champions. Sophomore Brendan Hazelton continues to build off his solid freshman campaign and took home the 125-pound weight class championship, while newcomer Dylan Dwyer continues to impress with another individual championship, this time in the 157-pound weight class.

“It was nice,” Dwyer said. “Definitely no complaints. I set the goal to go out and perform as well as I could and I did so I was happy with that.”

Dwyer also won an individual championship last week at the Fall Brawl, dominating the 149-pound weight class at his first-ever career event as a member of the GVSU wrestling club.

Beside the two victors, GVSU also had two more wrestlers make it to the championship match. Juniors Bailey Bischer and Harun Bogdanic finished runners-up in the 174-pound and 285-pound weight classes, respectively.

The next event for the Lakers is not for another week. Next Saturday, the team will travel again, this time to Ann Arbor to compete at the University of Michigan Tri-Meet. This early weekend stretch was tough for the team, but according to assistant coach John Sanderson, it will be beneficial down the road.

“We’ve got a lot of tough kids,” he said. “I think we have a lot to look forward to at the end of the year. Weekends like these are where guys get a lot of matches in one day, which will happen often down the road in the national tournament.”

As the competition level will continue to rise, so will the experience level for these young wrestlers for GVSU.