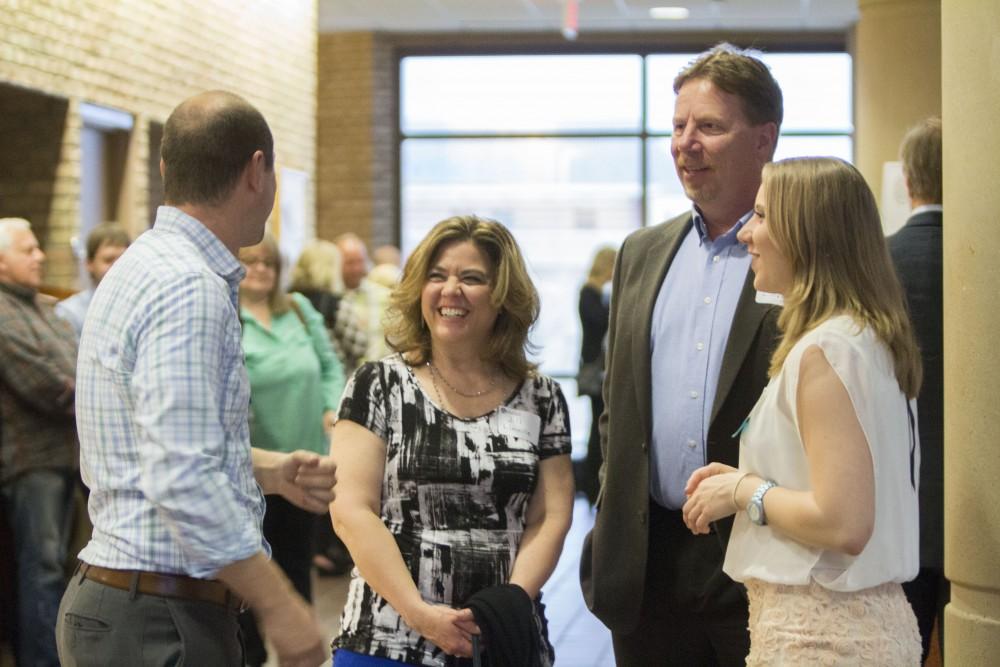 Students graduate from college all the time, but not everyone makes it out of college being praised by the deans of their discipline for their academic excellence. When a student aims to achieve their absolute best, and they do everything they can to succeed, they have the chance to be the recipient of an Excellence Award given out during the Student Awards Convocation at Grand Valley State University.

The yearly ceremony awards 120 students in different disciplines chosen by faculty members of those majors. In addition to the Excellence-in-a-Discipline Awards, students also have the opportunity to be recognized in three other categories of awards.

This year, Monday, April 10, the most prestigious award of the night, the Kenneth R. Venderbush Leadership Award, was given to student senate president Ella Fritzemeier. The Venderbush Award recognizes a GVSU senior who has demonstrated exceptional leadership and academic abilities, with nominations coming from students, faculty and staff.

Fritzemeier shared the evening’s spotlight with student composer and music major Nikolaus Schroeder. Each received three awards total, including the Excellence Awards in their majors, along with the Glenn A. Niemeyer Award, named after the first provost at GVSU.

“I just feel overwhelmed that I received three awards,” Fritzemeier said. “There are so many great students that go to Grand Valley that it’s just an honor to have been selected for any of the awards, let alone three of them.”

The other two recipients of the Niemeyer Award were graduate students Lauren Huisman and Megan Madole.

Seniors Skylar Wolfe and Lukas Schroeder took their Excellence Awards in women, gender and sexuality studies and music, respectively, in addition to winning the Thomas M. Seykora Award for Outstanding Contribution. The Seykora Award recognizes students for their “significant and outstanding” involvement in the GVSU campus community, according to the award description. The other winners of the award were Terrell Couch, Christopher Jing-Ho Doherty, Jaclyn Ermoyan, Brandon Fitzgerald, Malayna Hasmanis, Brianna Miranda, Sean O’Melia and Schroeder.

Provost and executive vice president for academic and student affairs Gayle Davis gave a speech to the receiving body about the work they’ve accomplished and the path they’ve forged to graduation. The retiring provost said for the first time she shared the feeling of leaving GVSU with this year’s graduating class.

“You and I will lose the special environment of college soon,” she said. “With that departure, we will gain independence and autonomy but lose the extraordinary intellectual climate and support of our university.”

Davis asked the students what moments of their life contributed to their honor and how they had developed as individuals because of their time at GVSU.

“I really believe reflecting on one’s experiences helped you form thoughtful and informed action and success in your future,” Davis said.

The convocation was held by the Office of the Provost for the first time this year after a long tradition of being held by the Dean of Student Office. Executive assistant to the provost Linda Stratton said the award ceremony was previously held as a dinner event in years past but changed as GVSU grew in size.