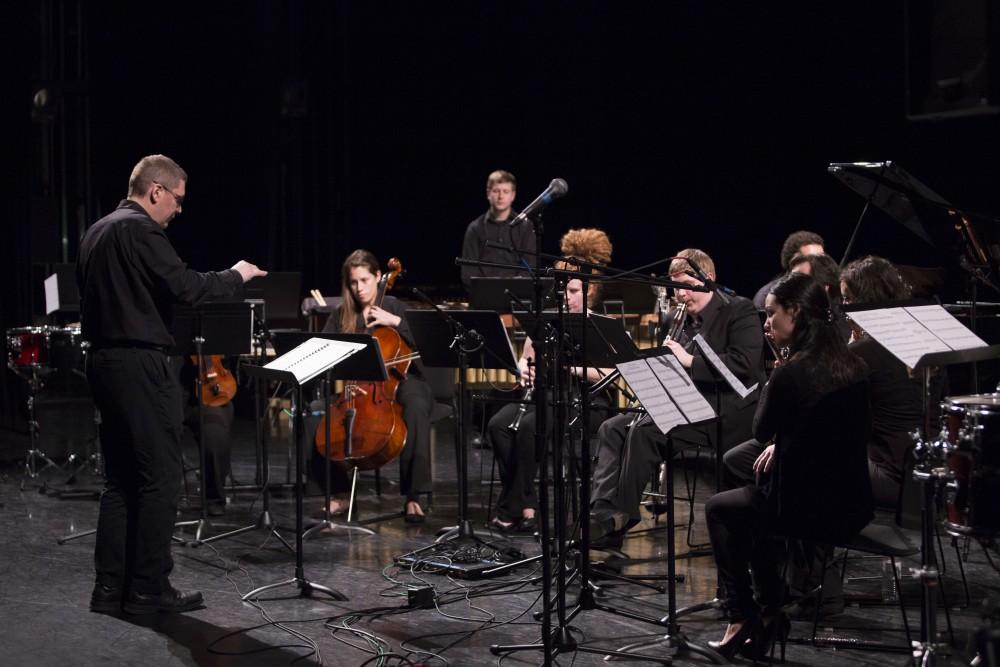 After 83 concerts, 33 commissioned pieces, three commercial recordings and three tours, the New Music Ensemble at Grand Valley State University has come a long way since its founding in 2006.

With 146 current and former members, the ensemble celebrated its accomplishments with a 10 year anniversary concert on April 2 at the Peter Martin Wege Theatre.

The New Music Ensemble is a GVSU group that plays music written in the last 30 years. Founded by their director Bill Ryan, the undergraduate ensemble has promoted a variety of new music through commissions, tours, recordings, educational events, workshops and videos. With ensemble alumni on stage and in the audience, GVSU administration and music faculty in attendance and members of the community, the concert was a testament to the achievements of the ensemble.

“This kind of success is a unique and wonderful teaching environment, an environment in which music of the last 30 years is examined, performed, learned,” said Danny Phipps, chair of the music and dance department. “It’s done in a setting where you have faculty and students performing together, alumni coming and performing, great artists from around the country coming to perform.

“It’s almost like an experimental classroom. And out of that incredible vision and knowledge has come an amazing product.”

Also taking the opportunity to celebrate their work with composer Marc Mellits and his 50th birthday, the program for the concert contained all music composed by Mellits. Over the years, Mellits composed two pieces for the New Music Ensemble and gave master classes, coaching students in playing his compositions.

“There are other universities I have a relationship with, but this one is the most special,” Mellits said. “I’ve gotten to know the students over the years. To come back consistently is something special because you build a real relationship with the students and the art that they’re creating.”

One of the pieces Mellits was commissioned to write for the ensemble is “Processations.” Written in 2015, the piece uses the speech the speech of Steve Reich, a composer and friend of Mellits.

Starting with just four notes played on the piano, the other instruments join in one by one, followed by what sounds like an old and distant recording of Reich’s voice. The recording eventually becomes clear enough to hear “I do not mean the process of composition, but rather that pieces of music are literally processes.”

Just as music is a process, the New Music Ensemble has gone through its own process of growth during the last 10 years in terms of organization and performances. Ryan said the original ensemble started by only performing one or two concerts a semester on campus, whereas this year’s ensemble has had the opportunity to go on tour and perform around the Midwest.

Having a core instrumentation, Ryan said, lead to having an ensemble that works together well as a group. Learning to anticipate each other and work together in a professional way, Ryan said during their latest tour over spring break while he was sick with pneumonia, the ensemble was able to continue to perform on their own.

Mellits, who saw the students perform during the tour, said he was impressed by their level of professionalism and cohesion.

“(The students) rise above themselves with their unity within,” Mellits said. “They somehow are able to achieve greatness relying on each other. They really work best as an ensemble. When they can create this amazing, extremely professional ensemble I think it’s very special. That’s what makes these guys different.”

For Ryan, being able to see students progress during the year and after graduation is one of the highlights of directing the New Music Ensemble. In the future, he said he hopes to see the group continue to succeed.

“What’s cool for me is to see the people that leave Grand Valley and continue this kind of playing,” Ryan said. “I think having a group that focuses on new music and bringing new music into the world is really important. All music was new and contemporary at one time. My hope is that once students leave Grand Valley, they keep the tradition of commissioning and premiering music going.”