Celebrating Hispanic and Indigenous culture through the sounds of Detroit 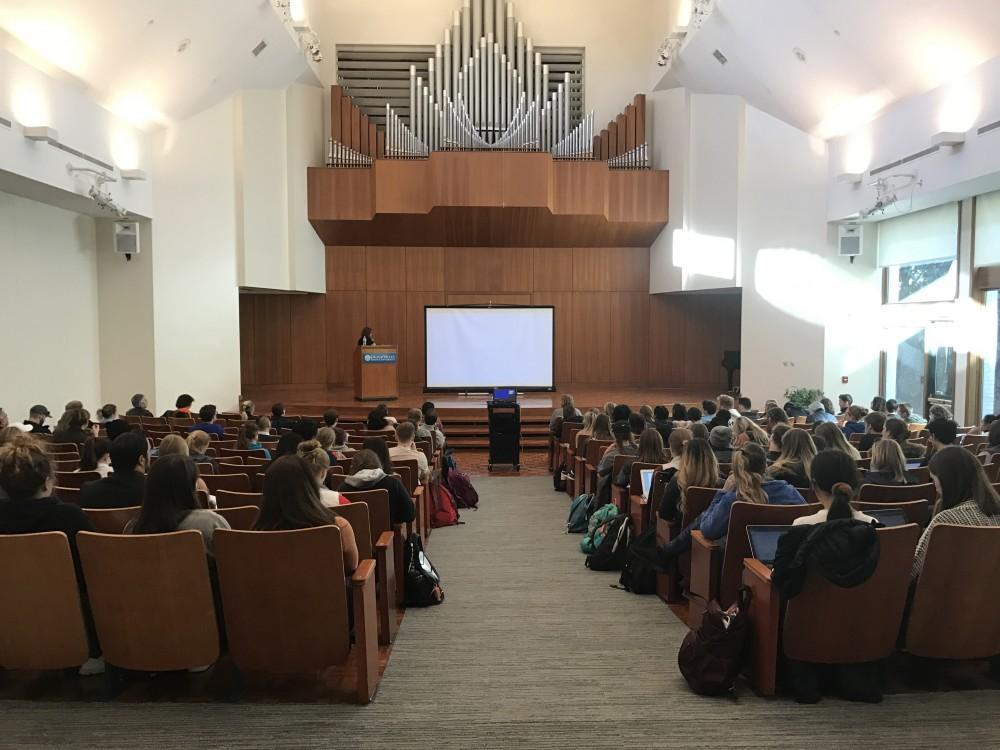 Rolena Adorno speaking about what Columbus day means for us today and why Hispanic heritage month matters.  GVL / Andrew Nyhof

Ojibwe and Chicano artist Sacramento Knoxx provided an interactive storytelling experience for the Grand Valley State University community, though his multimedia performance of music was influenced by his Detroit roots. The concert, held at the Cook-Dewitt Center on Wednesday, Oct. 24, was brought on by the Office of Multicultural Affairs as a part of the Hispanic Heritage Celebration.

Knoxx’s style of music embraces his cultural and regional background. He acknowledges Detroit’s prominent culture of music, claiming his music is inspired by “everything that contributed to the Detroit music scene.”

To incorporate his Ojibwe and Chicano heritage into his work, Knoxx uses traditional instruments such as Native American hand drums and percussion. Throughout the concert, Knoxx teaches words and phrases from the original Anishinaabe language of Detroit, also known as “Waawiiyatanong.”

The concert brought together GVSU’s Hispanic and Native American communities through music which contained traditional aspects of both cultures.

During the 45 minute performance, Knoxx encouraged audience participation by immediately inviting everyone to stand around the stage, as opposed to scattered in seats. The audience remained engaged throughout the concert as Knoxx periodically queued them to dance along with the music. For the final song, the audience joined together hand-in-hand in a large circle around the room as they participated in a Native American round dance.

Along with general audience engagement, willing individuals from the crowd were called onto the stage to learn and perform alongside Knoxx. A student was welcomed on stage as Knoxx explained how he uses some of his equipment to make music. To perform a traditional Mexican dance, GVSU faculty member Angélica de Jesús volunteered alongside her toddler, Keke.

de Jesús describes Knoxx’s interactive approach to performing as “the core of his work.”

“His interaction is a departure from that (tradition style of teaching),” de Jesús said. “Part of his project is that we visit with each other, we learn from each other.”

Knoxx’s concert incorporated his skills in music and film making to produce a multimedia experience for the audience. A screen behind Knoxx projected various short videos ranging from colorful graphics to documentary style videos, as well as public service announcements. Clips in the documentaries included various scenes from his neighborhood and experiences in Southwest Detroit. Knoxx emphasized the significance of the clips within the videos. “It shows the story of all that we are part of,” Knoxx said.

Knoxx’s activism reaches beyond his music and films. His recent action toward change in his community included the grassroots hyperlocal art center that he is currently building.

“We want to make a world-class art center right in the hood,” Knoxx said. His goal is to give artists in Detroit an opportunity to grow and create music.

After Knoxx’s performance, the artist held a 15 minute group Q&A session. Once he was finished on stage, the audience was encouraged to stay and interact with Knoxx for the remaining hour of the program.