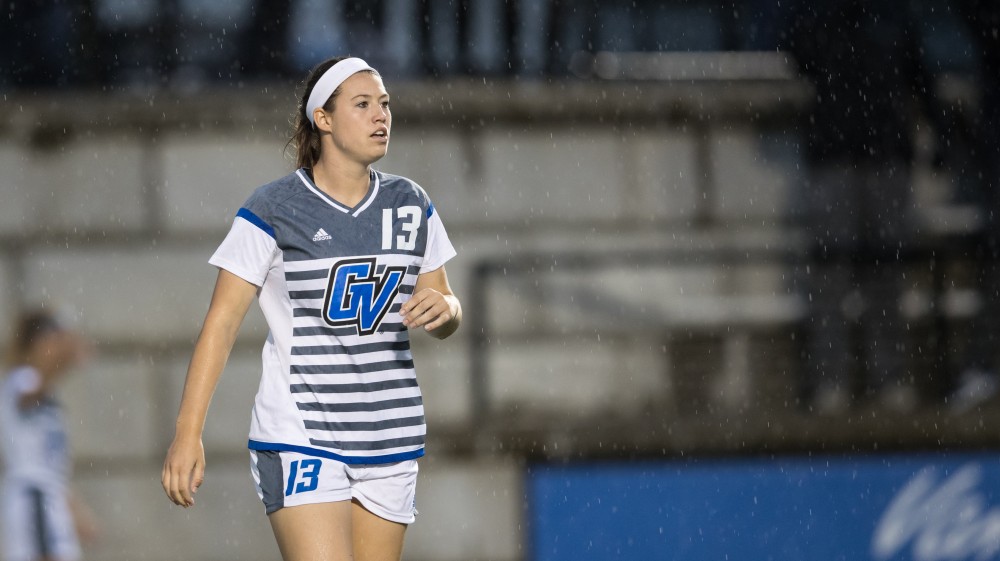 GVL/Kevin Sielaff - Marti Corby (13). The Lakers square off against the Dragons of Tiffin University Friday, Sept. 30, 2016 and win with a final score of 10-0 at Lubbers Stadium.

The Lakers’ leading goal scorer Gabriella Mencotti opened up the scoring with a header from a pass into the box from Kendra Stauffer. With the goal, Mencotti has found the back of the net 22 times this season, tied for second in the nation in goals.

“We scored a pair of goals that were first class, from start of possession to hitting the back of the net,” said GVSU coach Jeff Hosler.

With the assist, Corby now has 21 assists on the season, ranking first in the nation by a wide margin.

The Lakers took the first half momentum into the second half and scored six minutes in. Forward Jayma Martin played a cross into the box, and after a scrum in front of the net, Stauffer came out of the pile with an alleyway to the goal. She capitalized on the opportunity to put the Lakers up 3-0.

Later in the second half, the Bulldogs did something that has not been done to the Lakers all season in GLIAC games—score a goal. Ferris State’s Audrey Romine scored by recovering a rebound after another Bulldog fired a free-kick shot off of the post.

“This team has been fantastic defensively all year, to only allow one goal in conference play is a remarkable feat,” Hosler said. “I think we feel collectively robbed by that goal tonight and expect we will see even more pride in our defending moving forward.”

With the postseason starting Tuesday, Nov. 1, the Lakers have picked up their level of play. The team had a stretch of games in early October where the intensity was not there, but now the team is firing on all cylinders.

“This is a confident group that has come to realize the focus and energy we bring to the field is what will give us the best chance to execute and have success,” Hosler said. “There seems to be a real sense of urgency in this group right now.”

Stauffer, a senior who has been on the team for three national championships, knows how important it is for the team to find a rhythm down the home stretch.

“When our team gets closer to postseason, we pick it up a notch because we know how much harder the games are going to be and how much more important it is,” Stauffer said.

Stauffer is not the only one who is confident with how the Lakers are performing heading into the postseason.

“When this group is focused and plays with energy, we are very difficult to beat,” Hosler said.

The Lakers will look to keep the momentum when they start the GLIAC tournament against Northern Michigan. GVSU will host the Wildcats Tuesday, Nov. 1 at 2 p.m.