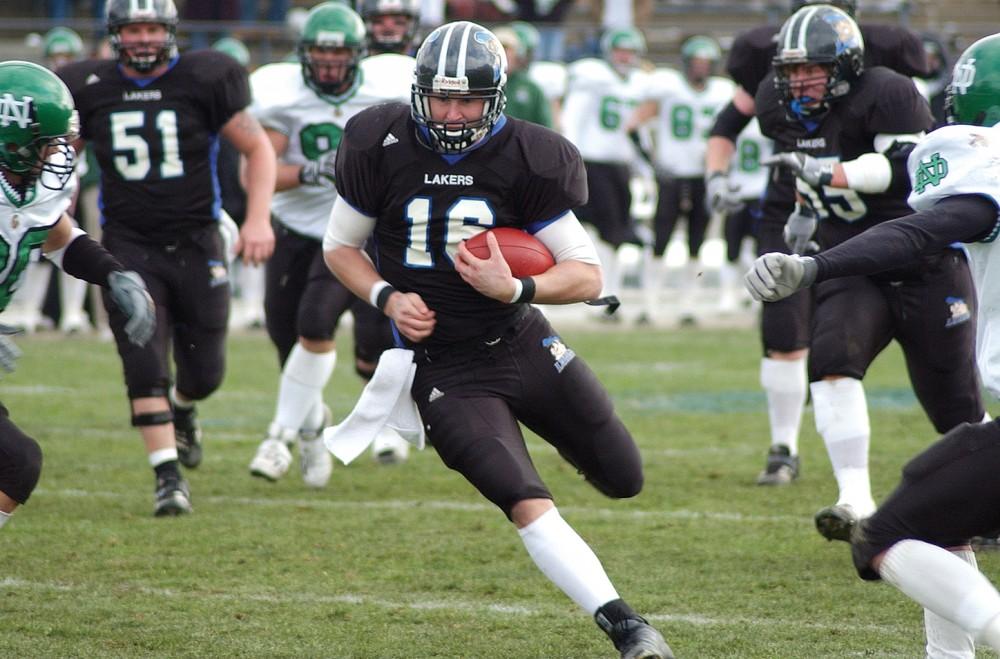 The National Collegiate Athletic Association (NCAA) is on the defensive end of a lawsuit citing the organization’s preference of personal branding and profits over the protection of its athletes. Filed by attorney Vincent Circelli representing a variety of former NCAA athletes — with the majority of athletes being former football players — the lawsuit could result in damages worth hundreds of millions of dollars.

The latest lawsuit is eerily similar to one filed in August by the widow of the late Grand Valley State University quarterback Cullen Finnerty. Jennifer Finnerty, represented by attorney Rob Dassow, cited the NCAA’s “reckless disregard for (Cullen’s) health” resulting in the ultimate death of her husband in 2013, according to the lawsuit.

During Finnerty’s time as an athlete at the University of Toledo and GVSU, the lawsuit claims that he “relied upon the NCAA’s authority and guidance” in preventing various “head-related injuries” that lead to long-term health issues later in his life. The lawsuit also states that Finnerty’s death is a result of the NCAA being in “a superior position to know of and mitigate the risks” of his various injuries, especially those to his head.

Finnerty is best known for his time as a quarterback at GVSU, where he posted a career record of 51-4, making him the winningest quarterback in college football history at the time, regardless of division.

Finnerty was the first Division II quarterback to pass for more than 10,000 yards (10,905 through four years) and run for more than 2,000 yards (2,370). The smashmouth quarterback from Brighton helped lead the Lakers to three national championships in his time at the helm, and was posthumously inducted into the GVSU Hall of Fame in October 2015.

In the NCAA’s official response to the complaint pleading filed, the defendant’s response to sections 20-23 (which included the accusation of the NCAA’s lack of action resulting in the death of Finnerty) stated that the “NCAA denies each and every allegation.”

Additionally, the Finnerty lawsuit accuses the NCAA of being ignorant of the scientific research proving the long-term health effects of collisions to the head. In its filed response, the NCAA claimed that it “lacks the knowledge and information sufficient to form a belief as to the truth of these allegations,” therefore denying them.

Dassow was unable to answer the Lanthorn’s questions regarding the lawsuit due to the developing nature of the legal proceedings.

The NCAA did not respond to the Lanthorn’s request for comment.

The NCAA has denied wrongdoing in response to the rest of the allegations made against it by the Fullerty lawsuit. Court proceedings are still unfolding under the jurisdiction of Judge Heather Welch.

The Finnerty lawsuit follows the settlement of a similar lawsuit filed against the NCAA in June, claiming the organization responsible for brain injuries resulting in the death of former University of Texas defensive lineman Greg Ploetz. The Associated Press reports that the settlement included a 70 million dollar medical monitoring program for athletes and a 5 million dollar fund to research potential health threats to athletes.

The Finnerty and Ploetz lawsuits are being revisited due to their uncanny similarities with the newest lawsuit in their accusations against the NCAA. Similarities in the accusations include the NCAA’s responsibility to protect its athletes and the long-term health risks of letting athletes suffer injuries to the head.

The results of the new lawsuit as well as the Fullerty lawsuit could have potential to all NCAA athletes, including those at GVSU. While the fallout of both ongoing lawsuits are still indeterminable, both are being critically spectated because of their impact on collegiate athletics.