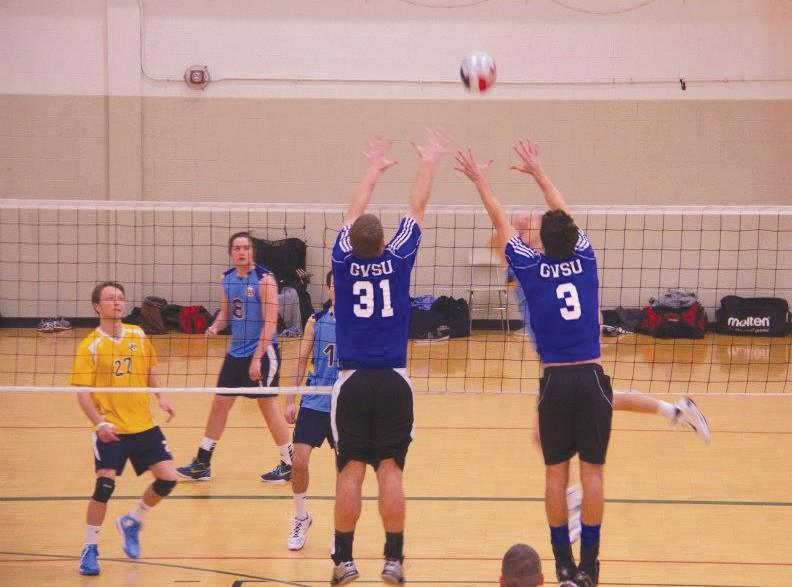 At nationals, the Grand Valley State University men’s club volleyball team was unable to live up to its Texas-sized expectations.

GVSU struggled at the 2013 NCVF Club Volleyball Championships inside the Convention Center over the weekend, finishing 37th in the field of 48 teams.

A slow start ultimately set the tone for the entire tournament.

GVSU stumbled out of the gate Thursday in pool play, losing to James Madison University in three sets before falling in two sets to both No. 10 University of Wisconsin-Milwaukee and No. 18 California State University, Long Beach. The trio of losses left the team somewhat shellshocked.

“It was a depressing day,” said GVSU senior Kyle Wright. “We were so close in every match, and those losses really took a toll on us. We just couldn’t finish – then we flatlined.”

Things went from bad to worse on Friday, as the team dropped both of its matches in two sets to Marquette University and No. 22 University of Southern California. The team’s collective frustration was beginning to mount.

The team was placed in the bronze bracket (bottom 16 teams) after losing its first five matches, something GVSU did not expect to happen before making the trip. A number of GVSU players were expecting to compete in the the gold bracket, but the team’s inability to close out tight games led to the setback.

Senior Luke Palmer said the worst part was how the team was losing.

“We weren’t getting blown out,” Palmer said. “We scored more than 18 points in every game, and eventually you just throw your arms up in the air and say ‘I don’t know what else to do.’ We just weren’t catching any breaks.”

In the bronze bracket, GVSU finally found a way to end the skid.

The team was able to defeat Stanford University in three sets on Saturday, which eventually secured the team’s highest finish at nationals since 2010.

The victory was short-lived, however, as a loss in three sets to Rice University in the quarterfinals meant a 37th place finish and the conclusion of the 2013 season. GVSU head coach Todd Allen said the finish was disappointing because his team had every chance to win games, but couldn’t find a way to execute in crunch-time situations.

“We were just a couple of swings away from a significantly higher finish,” Allen said. “It was disappointing because we just couldn’t close out matches when we had the opportunities, we just kept on falling a few points short.”

GVSU will hope for better results next year behind a young team that showed plenty of potential and athleticism this season. The Lakers are expected to return 15 of 20 players in 2014.
“It’s a good life lesson for these guys,” Allen said. “Hopefully it will give us motivation and something to build on for the future.”
[email protected]