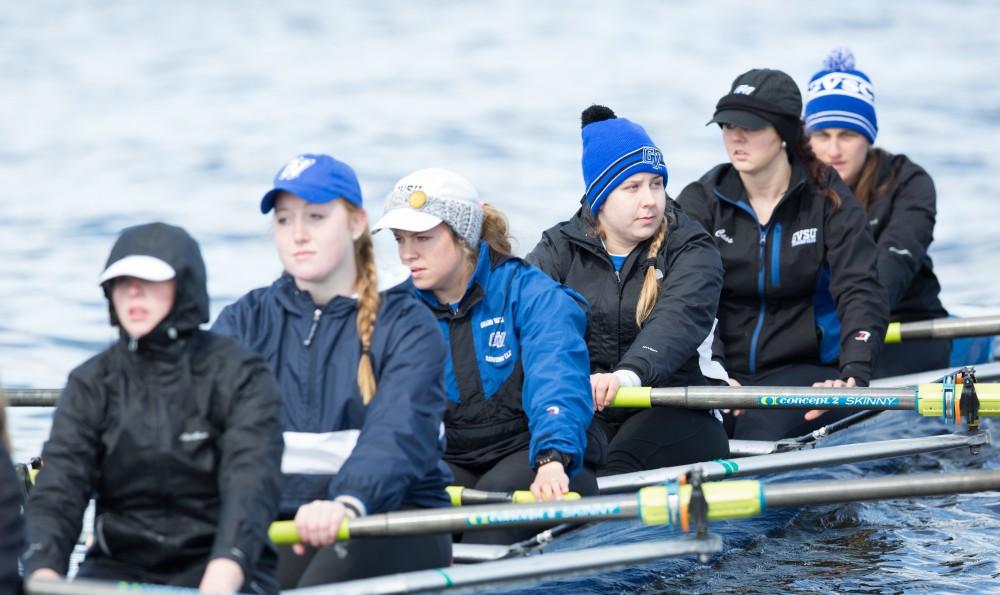 As the Grand Valley State University rowing club kicks into gear this season, its focus has shifted. Head coach John Bancheri understands the importance of the varsity team, but the focus for this season is rebuilding and preparing for future years.

“The focus really this year is in the rebuilding,” Bancheri said. “We’re rebuilding the Laker Navy, rather than ‘do you pull from the top or do you push from the bottom?’ There’s different ways that you can rebuild a team, and we’re talking about rebuilding from the bottom.”

The Laker Navy is made up of four groups: novice men, novice women, varsity men and varsity women. Walk-ons make up 90 percent of first-year novice rowers.

Coaches, staff and veterans of GVSU rowing are the guides to rebuilding the Laker Navy in support for future years. The Lakers recently made a change to the team with the new addition of Dan Martin as varsity assistant coach and novice women’s coach.

The past few weeks, the rowing club was busy participating in GVSU events, starting with the RecFest that took place Sunday, Aug. 27, and finishing on the night of GVSU’s Campus Life Night, held Tuesday, Sept. 5.

“Every single day for at least three or four hours we’ve been out and just kind of drumming up interest,” Martin said. “We’ve been specifically tracking down people who at least have the physical attributes that signals good rowing.”

GVSU club rowing is not a limited sport, as they offer positions on the team for anyone, no matter their skill level.

“One of the beauties about rowing and the rowing team is that there’s a place for everybody, there’s something for everybody,” Bancheri said. “You can have tiny, competitive people that would be perfect as coxswain. That’s the person that sits in the back and steers the boat, cheers the team on.”

The Laker Navy’s season is broken up into two parts: fall and spring season. The fall season is for learning, practicing and putting in the mileage. The team’s fall schedule is filled with head races, including distance races that are three miles and 5K races. Head races allow the rowers to become firm and learn to build a strong base.

The most important race of the fall season will happen Friday, Oct. 20, through Sunday, Oct. 22, in Boston. This race takes place at the biggest regatta in the world, and a lot of Division I teams will be in attendance. Last year, the women’s team took ninth place and the men took 13th.

Bancheri has taken the word “mileage” and turned it into a motivational term for his team at every practice and regatta.

Not only do the women’s row teams have a busy schedule this season, but so do the men’s. They are taking a 10-day trip to Greece to work on training from Friday, June 15, through Monday, June 25.

Senior rower Faith Platz, who is also president of the rowing club, believes motivated players contribute to the team.

The Laker Navy provides coaching, equipment and support for its team.

“We have amazing coaching staff, two new coaches this year that are already doing really great things for us, and we have a really good support system throughout the team, and we have really great equipment, with our boat house and all our boats that we have,” Platz said. “We have all those things. We just need people to come in with the right mindset and just really push themselves to be good athletes because it’s very possible.”

The Laker Navy kicks off the start of its new season at the Music City Head Race Thursday, Oct. 7, in Nashville.