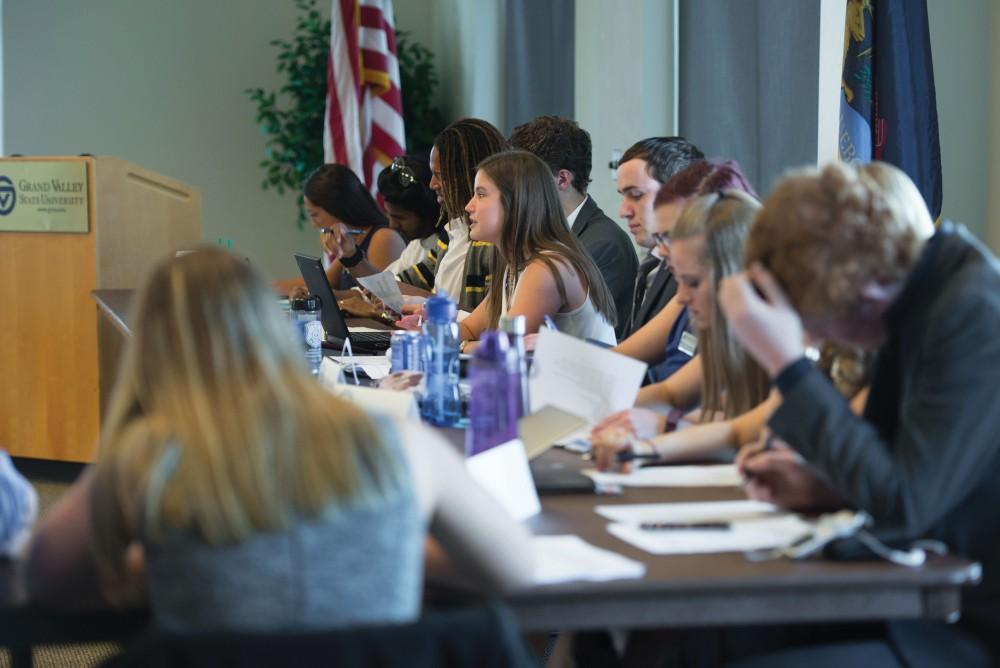 With only 47 days until election day, there are 19 days left until voter registration closes. With the days ticking away until registration closes, Grand Valley State University is pushing students to get civically engaged and register to vote.

GVSU’s student senate and Community Service Learning Center (CSLC) have planned civic assembly week and a Rock the Vote concert to draw in students who wouldn’t otherwise be engaged in the election process.

For the week of Sept. 26 through Sept. 30, a variety of activities, discussions and events will be happening on campus. These events are aimed to help start and continue a dialogue about civic discourse and responsibility.

Rock the Vote, a concert to encourage students to vote, will be Sept. 30 at 5 p.m. at the Lubbers Stadium pavilion.

“They thought it was a really good idea to get people to go out and engage right before this big election year,” O’Melia said. “Being engaged in our community and politics is super important.”

During the concert, bands will play a few songs and then a speaker will get on stage to talk for a few minutes about the election and why it is important to vote. Bands Lady Ace Boogie and Love Handle will perform at the Rock the Vote concert.

There will be free food and students have an opportunity to win a vuvuzela, a soccer horn, for the Laker soccer game right after the concert.

Additionally, student organizations will have the opportunity to be co-hosts for the concert.

“As a host organization, you’re basically saying ‘hey, we’re in support of this event, and we’re here to really promote voter registration and voter engagement,’” said Nikhil Watsa, vice president of the student senate external relations committee. “I think the idea is really just trying to spread the word around, and if we can get it into the organizations that’s one of the best ways to connect to students.”

The idea for a student civic assembly week was presented last year by a former student senator. Watsa continued with the project because he thinks it’s important for students to be engaged.

“This being such a polarizing election year, students are already talking and everyone (has) an opinion on what’s happening,” Watsa said. “I think it’s really important that we actually engage in what student opinions are and so they’re not just letting it sit there and die out.”

O’Melia said he hopes the variety of events will attract a wide range of students, faculty and staff. Ideally, students would attend all of the events. However, some people may only want to attend a select few, which is why student senate decided to host a wide variety of activities for students to choose from.

“I think having this good variety is pretty important for having a week (of events),” O’Melia said. “There are going to be some people who are really going to want to hear the guest speaker on Monday and then there are other people who just want to jam out to a concert.”

“I think we need to be accountable for what’s going on in our world and not just saying our vote doesn’t matter, that we can’t do anything about it,” O’Melia said. “If we don’t get involved and make our voices heard, then how can we complain about the way things are going?”

Even after civic assembly week concludes, GVSU and student senate will still be hosting events to make sure students stay up-to-date on the presidential race. Throughout the rest of the election cycle, the university will host debate watch parties.

The debate watch parties will give students the option to watch the three televised debates between Donald Trump and Hillary Clinton. Afterward, there will be a discussion facilitated by students, faculty or staff members. These facilitators have to be trained before they lead these discussions.

The first debate watch party is Monday, Sept. 26 from 7 p.m. to 9 p.m. in the Mary Idema Pew Library Multipurpose Room. The following one will be Sunday, Oct. 9, just two days before the voter registration deadline. The final debate watch party will be Wednesday, Oct. 19.

Student senate, the CSLC, Spotlight Productions, the Hauenstein Center, campus dining, the Lanthorn and various student organizations are all partners for the Rock the Vote concert.