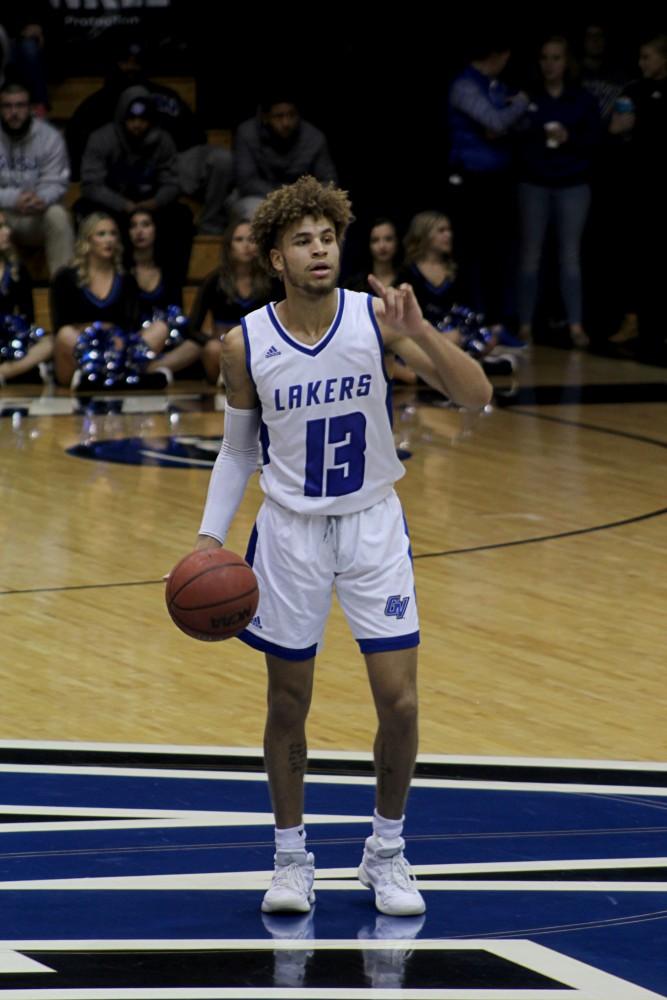 The Grand Valley State men’s basketball played lockdown defense to win their first two GLIAC matchups this season. They traveled to the other side of Lake Michigan on Thursday, Nov. 29 to beat Wisconsin-Parkside 88-77 before traveling again on Saturday, Dec. 1 to defeat Purdue Northwest 79-62.

The old cliché in football also reigns true for basketball: defense wins championships, or perhaps conference championships. Head coach Ric Wesley has loved the defensive improvement as he attributes it to the team’s hot start in conference play.

“I really think our defense has gotten better recently,” Wesley said. “We held Purdue Northwest, who’s one of the top scoring teams in the GLIAC to 62 points, so that’s really encouraging. Our defense is slowly but surely getting a little bit better, which will be real key as we head into the thick of conference play.”

The defensive intensity was on display throughout the week for the Lakers, using communication and quick feet to beat each foe by a double-digit margin.

On the other side of the court, GVSU was able to establish a quality offensive flow to open the floodgates and out-shoot both opponents. Jake Van Tubbergen led the team each night, with 25 points against Wisconsin-Parkside and 23 against Purdue Northwest to go along with 19 total rebounds.

Wesley was proud of the way the sophomore played and hopes to see that consistency in more conference games.

“He’s the type of player that’s going to have more nights like that,” Wesley said. “Our entire team had a solid couple games, but Jake in particular had a really good week.”

Van Tubbergen was far from the only Laker to play consistently well in each game, with Hunter Hale scoring 36 total points on the weekend, as well as Jeremiah Ferguson’s 29 total points.

A solid scoring output from multiple players along with holding each team to a field goal percentage of under 50 percent (45.5 percent for Parkside, 32.8 percent for Purdue Northwest) made the road to victory easy to travel upon for the Lakers.

“If you look at the scores the other night, there were several upsets, and very few games that weren’t right down to the wire, so it’s obvious there’s tremendous parity within our conference,” Wesley said. “Anytime we get a win we’re happy, but to do it on the road is like an added bonus.”

After these two wins, GVSU improves to an overall record of 6-1 on the year with a 2-0 start to GLIAC season to go along with that. Despite this early success, Wesley and the rest of the Lakers are more focused on the upcoming week, with two home conference match ups to GLIAC teams on the horizon.

“This is a challenging week for us, since Ashland was the pick to win the conference, and has probably separated themselves from the rest of the pack,” Wesley said. “It will come down to our ability to matchup with their physicality, and Saturday we play a Wayne State team that is always physical, so it’s going to be two really tough games.”

GVSU looks to improve upon their hot start this week, as they face Ashland at home on Thursday, Dec. 6 before playing Wayne State on Saturday, Dec. 8. Both games are set to tip off at 8 p.m.