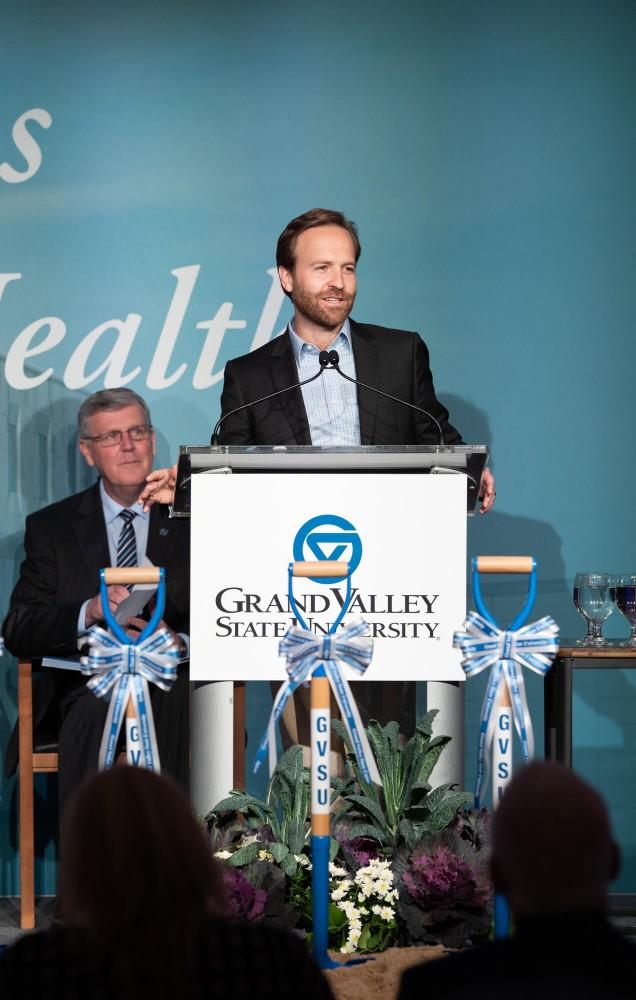 During their final meeting of the fall 2018 semester, Grand Valley State University’s Student Senate received a special visit from Lieutenant Governor of Michigan Brian Calley. Calley, a former Laker, spoke to Student Senate on a variety of topics ranging from personal experience to advice on how these students can become strong leaders, especially in the political realm.

Student Senate Executive Vice President Morgan Mattler said that he was excited to hear how his experience at GVSU both inspired him and prepared him for the political road ahead.

“Not only did we have that (Laker) connection with (Calley), but one of our student senators actually knows him, contacted him and said, ‘Hey, you went to Grand Valley and we want to know your experience as a Laker and how it got you to where you are now,” Mattler said.

Calley, who received his master’s degree in business administration from GVSU in 2000, took the floor by opening up about the history of his career, which described the gradual climb from the banking industry up to his position in state government. As Lieutenant Governor of Michigan in 2011, Calley was named the youngest person to hold the position nationally in the last 50 years.

The lieutenant governor explained that in the political world, there are “those who focus on rhetoric” and “grenade throwers” who evade focused rhetoric for stronger, blunt points. While Calley explained that he considers himself the former to encourage work across the aisle, he said that there is a place for both styles in politics and encouraged students to care about the job in their own way.

“Just give a crap about (the job),” Calley said. “Do what’s asked of you. Put your heart into your work. Make the most of whatever opportunity you get.”

Calley also reflected on the current state of the political realm, citing a lack of internal cooperation and a distrust in media creating turmoil and a lack of clear communication. In flipping the script, Calley said he looks toward upcoming leaders, like those in Student Senate, to change the course of politics for the future.

“Politics looks like a blood sport, and it shouldn’t,” Calley said. “Here’s my challenge to you: Be different than that.”

Following his presentation, Calley opened the floor to hold a question and answer segment, which Student Senate President Rachel Jenkin said she was most excited to hear.

Questions from the audience included digging into Calley’s experience as a Laker, where he recalls siding with GVSU for his degree due to its “value and affordability” in part. As opposed to a college model that favors professors who have a published textbook over career experience, Calley highlighted GVSU’s real-world experience.

“I was working full time at a bank at the time in Ionia, so I could drive to GVSU at night for the classes,” Calley said. “I found that most of my teachers in the MBA program were practitioners in the fields that they taught. I found that much more useful than my classes at Michigan State… To me, it was a breath of fresh air.”

Student Senator Thomson, who initially invited Calley to GVSU, asked the outgoing lieutenant governor what his plans will be as his term comes to an end within the year. While Calley said that he was “90 percent sure” what his next job would be, he was 100 percent certain that he wants to continue to stay involved in representing constituents.

“I do not plan to take any time off,” Calley said. “I’ll roll right into something else. I want to stay involved in public policy but I don’t want to be right in the middle of politics, so this is a good time for me to take a step back and not be on the front lines… In the end, I want to have my cake and eat it too… I’ve been looking for a role that allows me to be a step or two outside (the political) process, but close enough to have an impact.”

As Calley’s time drew to a close, Student Senate moved back into normal business to close out the semester. Jenkin said that she saw Calley’s visit as a means to inspire students, proving that students’ time in college can carry them far in life without sacrificing relationships to places like an alma mater.

“I think more than anything else, (Calley’s visit) shows that your degree can take you places and there are a number of ways to go,” Jenkin said.

“It’s not necessarily just politics, but to know that someone has gotten that far and then still holds connections to people our age… (and will) talk to us about his college experience is really humbling and just touches the community that we have.”