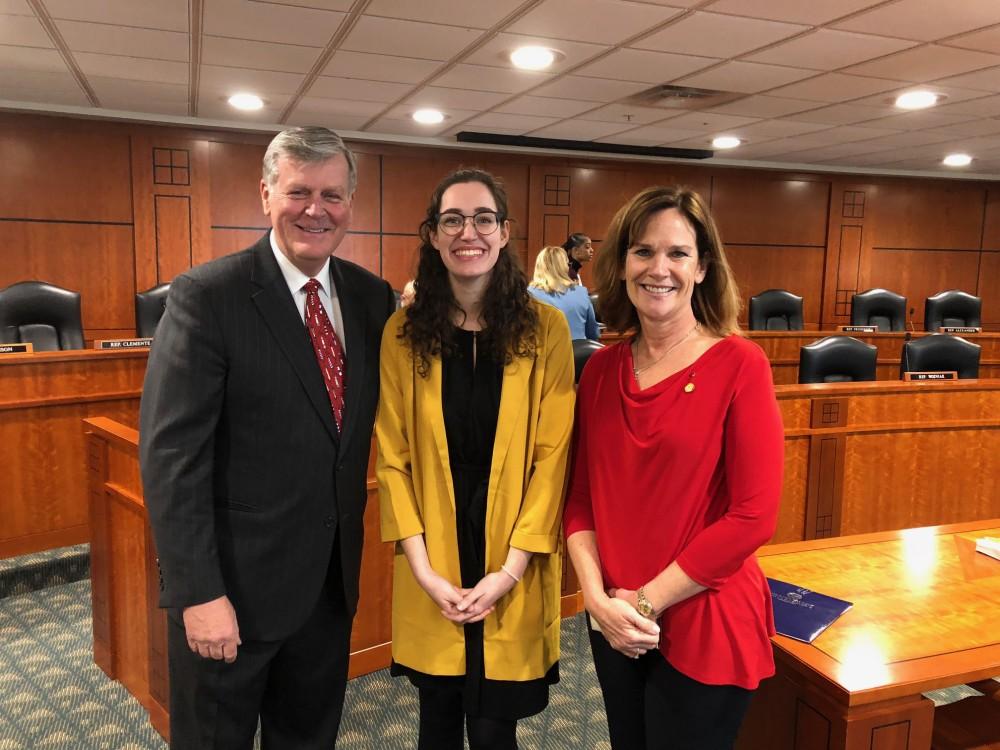 Student Senate President Rachel Jenkin stands among state legislators, the only student to testify in front of them that day. The Michigan House of Representatives’ University and College Appropriations Subcommittee sits there expecting another speech about the successes of their funded state universities. Instead, she catches them off guard.

“One in three of our students goes hungry by having to choose rent, textbooks or tuition over food. 40 percent of our students have reported finances being traumatic or very difficult to handle.”

In his address to the subcommittee, Haas stated that over the course of 56 years, the state has decreased its funding from fulfilling 90 percent of GVSU’s expenses to 17.6 percent this year. This hit to funding directly affects multiple state facets, such as infrastructure and the economy.

“We know that higher education is the pathway to prosperity,” Haas said to the subcommittee. “Yet that pathway in Michigan is full of potholes, with some of its bridges near collapse… We are not part of the problem. We are part of the solution. The return on investment and Michigan’s competitive advantage depends on investing in our human capital.”

Jenkin said that the key to the issue are the metrics for funding allocation, which doesn’t consider fair metrics related to graduation rates, enrollment and retention. The result doesn’t harbor student success, but rather a struggle to fund education.

“Universities have grown increasingly transactional,” Jenkin said during her testimony. “Please recognize that we are not selling a product; we are an environment for discovery and curiosity.”

Due to this lack of political support, Jenkin said GVSU must either fit into specific metrics and change its current trajectory or suffer from a lack of funding.

“Our focus is not on education anymore,” Jenkin said. “It’s on helping you survive with this bill. It’s something that (state legislators) can fix, but they choose not to.”

Jenkin noted that in the past 10 years, state funding has gone down 40 percent and tuition has risen 40 percent. If GVSU attained the same funding as the top-funded university in the state, tuition would drop from $12,484 to $7,490 for an in-state student. For out of state students, tuition will drop to $10,657 from $17,762.

The fact that GVSU students are being sold short should spark conversations, Jenkin said. While the delegation’s visit and strong reception should spark some hope of change, it is a double-edged sword dependent on students taking action.

“I truly believe that this work is so much larger than us going to Lansing,” Jenkin said. “If students are aware of the issues and are talking about them in places other than just (at GVSU), I think there is a lot of hope.”

Whether or not the GVSU delegation will have an impact may be seen as early as next month when Gov. Gretchen Whitmer reveals her budget recommendation for the state Legislature.