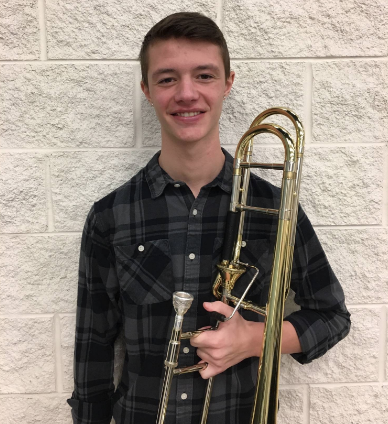 The Grand Valley State University Symphonic Band performed an array of colorful and contemporary pieces to the GVSU community during their Feb. 22 concert at the Louis Armstrong Theatre. Junior trombonist John Tesner earned the opportunity to perform a solo in the concert, which was conducted by Kevin Tutt.

After winning GVSU’s 2018 Concerto Competition in which student pianists, vocalists, string and wind instrumentalists competed, Tesner was granted the honor of performing a solo, which was accompanied by the band in the performance of Bert Appermont’s “Colors.” Tesner said his director refers to the piece as “Epcot music,” suggesting the happy and fun tone of the music.

“The piece is meant to explore how colors sound,” Tesner said.

“Colors” highlights the emotional association of each color through the band accompaniment and trombone solo. Beginning with “Yellow,” characterized as regal and energetic, followed by “Red,” which Tesner described as a “driving force” and the solemn sounds included in “Blue.” The piece concluded with “Green” which was intended to radiate hope and balance between the other colors, according to Tesner.

Principal clarinet Amy Zuidema emphasized the importance of the band performing work from female composers. While a majority of bands play music from male composers, Zuidema said there has recently been a movement of music from female composers being performed by bands. The concert opened with two contemporary pieces composed by women: Kathryn Salfelder’s “Cathedrals,” composed in 2007 and Julie Giroux’s “One Life Beautiful,” composed in 2010. Zuidema said these pieces were “beautiful.”

“Most bands are starting to perform woman composers, and I think that is really important,” Zuidema said. “The ratio of women versus men being performed is still really small.”

Shifting from contemporary music, the second half of the show consisted of music from Lewis Milestone’s adaption of John Steinbeck’s novel “The Red Pony.” The music, composed by Aaron Copland, included six pieces from the screenplay. Zuidema and principal oboe Lauren Glomb described Copland’s pieces as “jazzy and pastoral.”

Representing members of the GVSU Symphonic Band expressed their goal of enhancing the audience members’ lives through their music. Each student shared their perspective on the impact of the audience’s support.

“It’s fun to perform but we really do it for other people,” Tesner said of the importance of peer and community support. “When other people come it gives us something to enjoy while we are doing the performances.”

Zuidema recalls her director telling the band each concert, “We aren’t doing our jobs right if we don’t play in such a way that effects or changes someone’s life for the better, or even change someone’s life if they are in a bad place.”

“It’s not just a concert, it’s people coming together to do something good,” Zuidema said. “It’s good for everyone to build and support a community.”