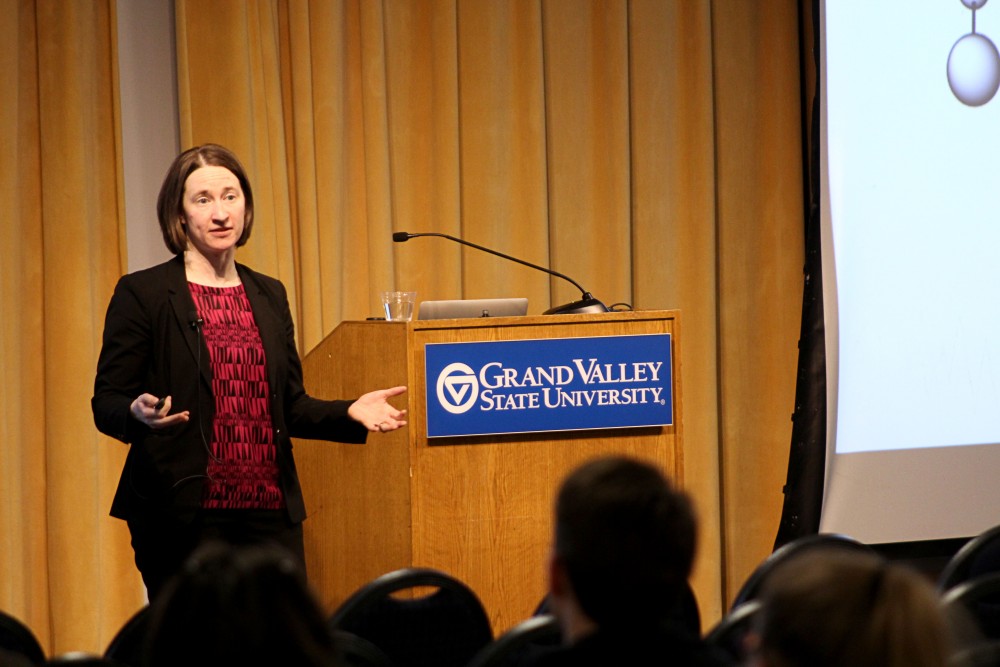 Rising star in the world of chemistry Melanie Sanford was the key speaker at this year’s annual Arnold C. Ott Lectureship in Chemistry on Grand Valley State University’s Allendale Campus.

“(Sanford is known for her) research in developing new methods in synthetic organic chemistry, specifically the production of new molecules, whether they are for agricultural chemicals, medicines, polymers and plastics or components of the electronic grid,” said GVSU chemistry professor David Leonard.

With over 100 publications and many awards under her belt, it was no question that she would be asked to speak at the lectureship.

“Several GVSU chemistry professors were familiar with doctor Sanford’s work, and her status as an innovative thinker and a rising star in the world of synthetic chemistry,” Leonard said.

Leonard also accredited her being a well-known speaker among chemists as reasoning behind the decision.

Sanford presented two lectures over the course of two days. On Thursday, April 4 she gave the lecture “New Ways to Make Molecules: From Fundamental Science to Applications in Medical Imaging and Drug Development” at 6 p.m. in the Grand River Room of the Kirkhof Center.

On Friday, April 5, she gave her second lecture, “Developing Organic and Inorganic Molecules for Electrical Energy Storage,” at 1 p.m. in the Pere Marquette Room of the Kirkhof Center.

“The April 4 lecture is a talk geared toward community members with an interest in science, but not necessarily a background in chemistry,” Leonard said.

On Thursday, Sanford spoke on how she and her colleagues are working to develop safer and more environmentally friendly ways to form bonds during the creation of new molecules, said Leonard.

The April 5 lecture was presented with a more chemistry-based audience in mind.

“(It focused on) a more in-depth analysis of how her lab is working to create novel materials that can be used to store electricity,” Leonard said.

Leonard explained that the materials Sanford and her lab are working on will develop important, innovative solutions in the near future.

“(Her materials) are expected to become ever more important as society seeks ways to efficiently store electricity generated by renewable energy sources such as solar and wind power,” Leonard said.

GVSU’s Chemistry Department hopes that hearing about Sanford’s world-renowned work in the field of chemistry involving finding solutions to seemingly unsolvable problems from the chemist herself herself will encourage students to feel as though they can have a similar impact in the field.

“Because she is known as an excellent speaker, it is hoped that students will come away feeling inspired that future chemists such as themselves can play an important role in overcoming seemingly intractable problems,” Leonard said.