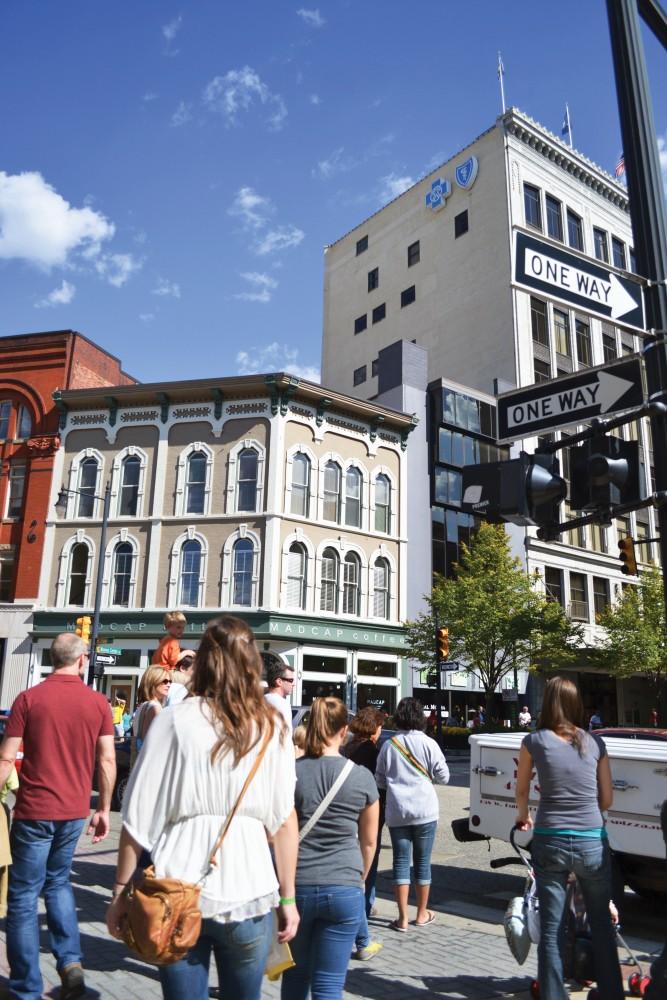 GVL / Mikki Fujimori Businesses in Grand Rapids could be affected by the upcoming election.

With economic questions and analyses taking precedence at debates of all levels, it’s clear that the economic status and future of the U.S. stands as a prominent issue in the November elections.

“There’s no doubt that in this election cycle, (with talk of) jobs and the economy (and) related issues about government deficits, jobs are at the very top,” said Roger Moiles, professor of political science at Grand Valley State University. “But it’s a question about how each candidate plans to get there. They do approach it from a somewhat different standpoint.”

However, those standpoints remain ambiguous to many voters.

“I think a key concern for most is that we don’t really know as much about the details about what either candidate plans to do in the next four years,” Moiles said.

Essentially, President Barack Obama intends to raise taxes for people with incomes greater than $250,000, while Gov. Mitt Romney plans to cut the tax rate across the board.

“But beyond that, we don’t get a lot of explanation on higher tax policy,” Moiles said. “It tends to come down to sound bites.”

Paul Isely, professor of economics at GVSU, said the fundamental difference between the candidates’ economic plans surrounds the question of what part of government policy is important for business. The varying answers give rise to two economic philosophies.

“One way would be to try to generate overall growth, (and the other is to) create a more stable economy with fewer ups and down,” Isely said, adding that Romney values growth while Obama values stability. “That fundamental difference then leads to all the other choices that they make on the economic front.”

Isely said the Romney camp would prefer to have a lower overall tax rate to allow existing businesses to grow faster. The philosophy backing this idea is that the more resources a business has to invest, the more options it has to grow and the more profitable it will be.

Meanwhile, Obama values slightly higher government spending with the idea that it can be used to smooth out the business level.

“That will allow us to stabilize things by providing for a few more social services, which will make things more stable,” Isely said, adding that Obama intends to increase revenue by increasing taxes for people above a certain income level.
But he added that there’s really not a huge difference in the candidates’ plans from an economic standpoint.

“When it comes down to a straight economic point-of-view, essentially what’s happening is that when you look at what the Obama administration says they want to do versus what we see in the Romney plan, the Obama plan would want to spend $1 more for every $10 the Romney administration wants to spend,” Isely said.

H. James Williams, dean of the Seidman College of Business, said the economy really wouldn’t change regardless of who is elected.

Williams said whoever is elected will not affect the economy in the short-term, but he would not comment on the long-term best choice.

“Over the longer term, Romney would institute policies that would be less burdensome for business, and if you take him at his word, he would dismantle the health care reform act which would please a lot of medium and smaller businesses for sure,” Williams said. “Obama, on the other hand, I think would continue to press for what he’s done the last four years … I think the last four years he’s done some good things.”

But Isely said there’s a debate on how influential a president can actually be on economic growth, and that many economists think the president is not as influential on the economy as citizens believe him to be.

“It’s been suggested that people overweight the influence a president has on the economy,” Isely said. “The president doesn’t have control of the purse strings. They provide leadership and guidance but that’s congress’s (job).”

Even if the president doesn’t have much influence over the economy, it’s essential for voters to pick a side. Each economic strategy has its own supporters, and not all businesses value the same plan.

“Both sides favor different businesses,” Isely said. “Preference depends on which subsidies that government is giving out. There would be reasons for people in particular businesses to side with a particular camp.”

Moiles said not all businesses agree on one candidate’s economic strategy to advance business and the economy, but the Chamber of Commerce generally supports Republican candidates and their approaches.

The economic policies not only affect businesses, but individuals, as well. For that reason, voters should consider economic plans when voting, according to Moiles.

“Because of the distribution of money, there will be different distributions within science, within art, within communication, within infrastructure,” Isley said. “It doesn’t matter where you are, the choices made in the economic plans in the next couple years will determine what the country spends its money on … If they mess it up and we go into a recession, it decreases chances of getting a job in anything.”

The different plans offer different distribution strategies, but both aim to accomplish the same thing.

“Both plans as they’re laid out decrease spending or increase taxes enough (that) both would be sustainable,” Isely said.