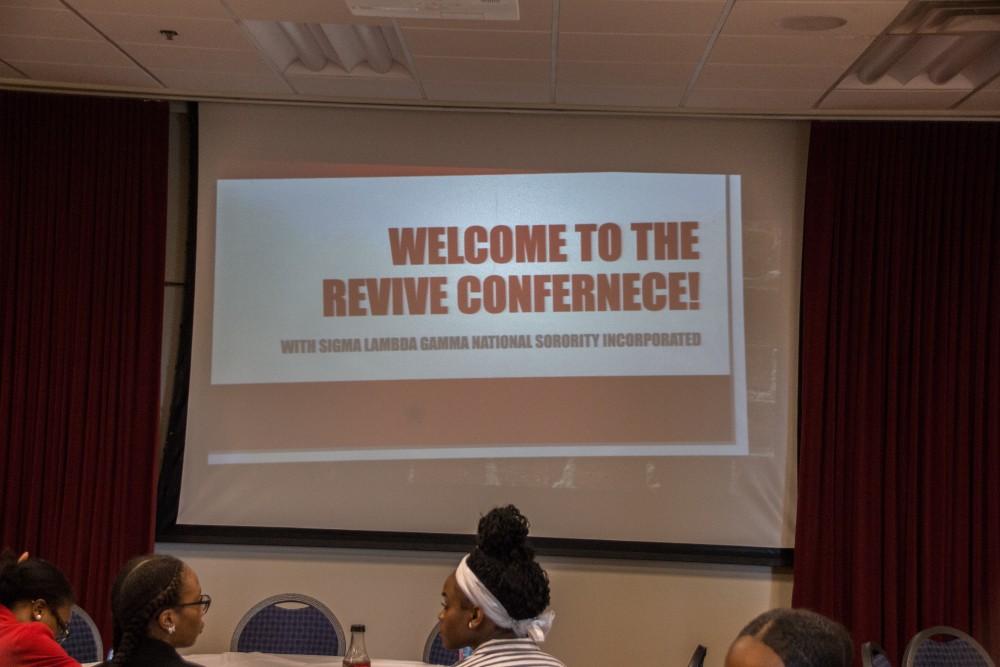 Approximately 30 attendees gathered to experience the annual conference hosted by the student organization Revive at Grand Valley State University Saturday, Oct. 21, in the Kirkhof Center. The conference, which focused on issues affecting minority populations, was a combination of five sessions co-sponsored by the Omicron Alpha Chapter of the Sigma Lambda Gamma National Sorority Inc.

“The purpose of our multicultural sorority is for excellence, morality and inclusion for all people of diverse cultures,” said Natalie Joaquin, president of the sorority. “We all share an understanding of respect for different opinions while listening for new ones. Our goal is to educate and allow in all walks of life, so this conference fit perfectly.”

During the event, students attended the different sessions and learned about a variety of topics. For example, they went through Question, Persuade, Refer (QPR) suicide prevention training and received certification.

The groups hoped to spark student conversations by giving attendees opportunities to listen to their peers and respond.

“Each session is different,” Joaquin said. “Some have a panel of personnel from different backgrounds, some have a speaker. Participants go through each session with their groups then switch off at intermission.”

The Revive team, which has been in existence for almost two years, plans to do a conference every year to continue educating the GVSU community via discussion and presentations. Their “Suicide Prevention Week” in the past has assisted in propelling conversation on the topic.

“Each session talked about something new,” said LaShawntelle Carson-Pops, vice president and founder of Revive. “Black male leaders was one of those topics, involving African-Americans who spoke on making a difference in their communities.”

The topics of the LIB 100/201-approved event included black male leadership, rape culture, suicide prevention, immigration laws, and minorities in health care, which together took the form of five sessions. Each was designed to engage audiences through conversation, education, interaction and active listening.

“The beautiful thing about the event is it brought together people to talk about harsh topics and people who may have been impacted themselves by them,” Joaquin said. “These intersectional relationships can often stress a person out. This conference gave students tools for healing.

“The concept of Revive is to talk about the past, start to heal and restore yourself, and then begin to reshape and renew your life.”

Attorney Robert Anthony Alvarez of the Avanti Law Group, PLLC, spoke during the immigration law and reform session to bring attention to current events and address issues not often discussed in the public sphere.

“We wanted a diverse crowd, so we boosted our advertising,” Carson-Pops said. “We had speakers and presentations open up new lines of thought and conversation for participants that I never before thought, which encouraged me to do the same thing.”

Editor’s note: In the original version of this article, published online Wednesday, Oct. 25, and in print Thursday, Oct. 26, the headline and some of the wording made it seem like the event was held primarily by the Omicron Alpha Chapter of the Sigma Lambda Gamma National Sorority Inc and that the title of the event was the “Revive Conference,” while in fact Revive is the name of an independent registered student organization at GVSU and the sorority involved was a co-sponsor. This information has been corrected.