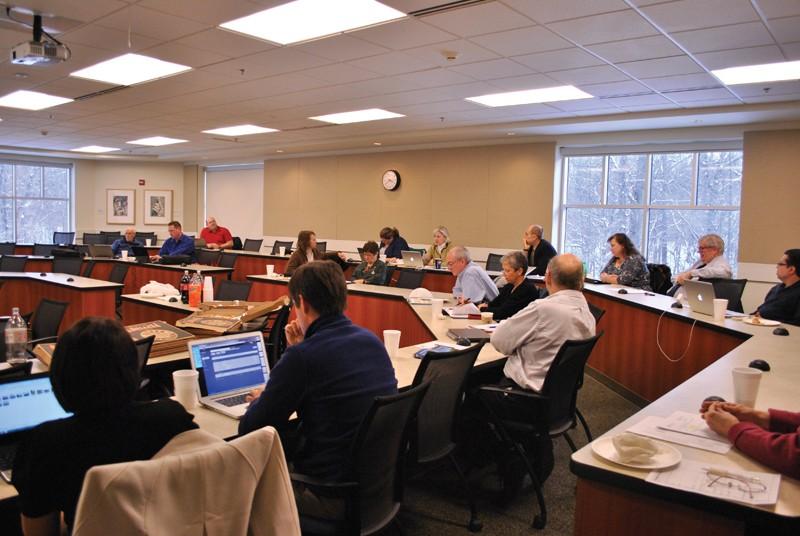 GVL/ Archive A past UAS meeting.

Figen Mekik, chair of the UAS and associate professor of geology at GVSU, said the proposal was not to alter the standards for those up for review, but to simplify the process.

“The change in the number of personnel reviews will neither make it easier nor more difficult for faculty to earn tenure and promotion,” Mekik said. “The proposal is not to change the standards for tenure and various faculty ranks; rather it is to streamline the process of review so that while untenured faculty receive timely and constructive feedback, they are not burdened with numerous and frequent formal reviews.”

As of now, faculty have two contract renewal reviews and one tenure review dispersed through years two, four and six.

“The problem is that in year two, they get reviewed in January, and they put their materials together in the fall, so they only have two to three semesters to show,” said professor Kurt Ellenberger, chair of the Faculty Personnel Policy Committee. “Scholarship can take years to get published, the first year is really focused on teaching, and they’re not expected to do a great deal of service either. Yet, those are the three things that they are evaluated on.”

Ellenberger said the time before the evaluation period is very short and does not give instructors adequate time to accomplish as much as they would hope to. The proposal eliminates one of the contract renewal reviews and allows faculty two and a half years before going up for their first review, which Ellenberger said would provide new instructors more time to acclimate to their positions.

“This would give them 2.5 years to really get their teaching solid, their scholarship going and begin their service work,” he said. “But, we have also proposed that they be reviewed every year during a separate process that is not as involved as a formal review, so this actually strengthens the feedback they would get while at the same time reducing the number of reviews.”

“We were looking at voting issues for untenured faculty, and the issue of our three-review process came up because it appeared to be idiosyncratic,” he said. “We also heard about a lot of problems that can arise when you review someone who has only been here for a few semesters. So, it started as an ancillary issue, but FPPC was then charged by the Senate to study the issue and make recommendations, if we had any.”

Mekik said faculty members who are beyond their first year at GVSU will not be affected by the change in any major way, but will receive more formal yearly feedback from their departments and will participate in more mentoring sessions.

Furthermore, the amount of tenured faculty will neither increase nor decrease, Ellenberger said.

Ultimately, the university looks to foster faculty professional improvement and academic growth from the changes.

“The goal with this policy change is to retain the best faculty at Grand Valley and to facilitate the development of their careers while employed here,” Mekik said. “The new proposal seeks a balance between timely, constructive and formative feedback to untenured faculty and a fair evaluation process for the retention and promotion of those faculty.”

Now that the UAS has approved the policy change, which was formally proposed as a collaborative effort between the Faculty Personnel Policies Committee, the University Counsel and the Provost’s Office, Provost Gayle Davis will decide the next steps. If Davis approves the recommendations from the UAS, she will consult other colleagues in senior management, like the University Counsel, President and Board of Trustees and then implement changes as necessary, Mekik said.