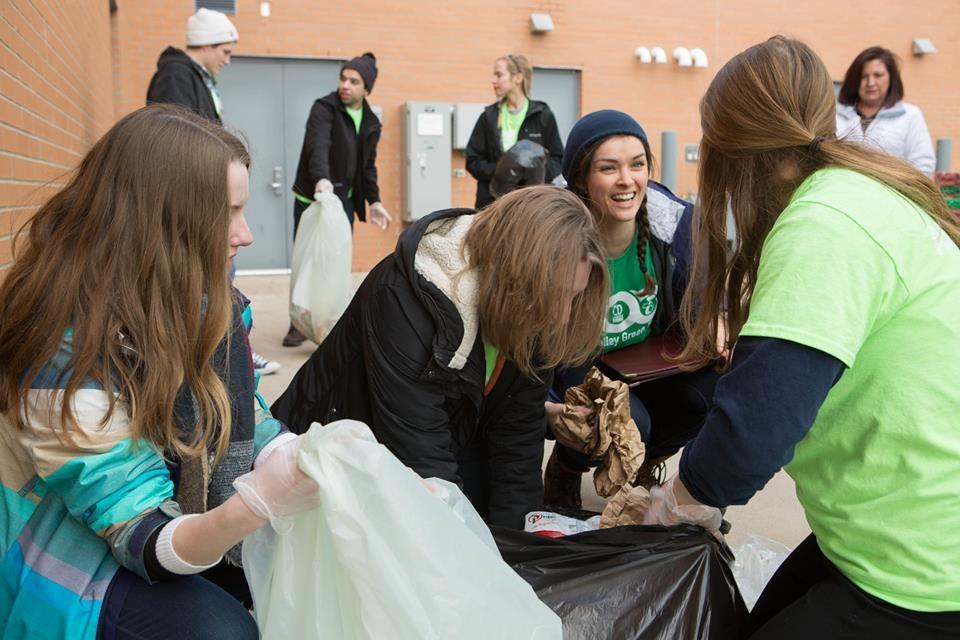 Each year, universities from all over the United States compete in the nationally recognized competition known as “RecycleMania”. This past season, Grand Valley State University took eighth place in the recycling category as well as 12th in overall diversion rates.

In 2001, RecycleMania began as a contest between Miami University and Ohio University as a way to promote recycling efforts on each school’s campus. The competition saw an increase in campus recycling participation and has since expanded to more than 150 colleges and universities.

RecycleMania takes place each spring over the course of eight weeks. During each week, universities report the amount of recyclables collected and are ranked based on their diversion rates. As the competition continues, participating schools can see where they stand compared to their competition and attempt to improve their ranking by reducing more waste.

Within the competition there are also several different categories that measure various forms of diversion, recycling and waste minimization. In sustainability terms, the diversion rate is the amount of waste that is diverted from a landfill and repurposed through recycling and composting efforts. In 2016, Grand Valley was ranked 47th for it’s 46.92 percent diversion rate. The university has since been able to climb up in the overall rankings to 12th place, with a now-63.38 percent rate.

GVSU placed even higher in the total recycling category, ranking eighth along with being only one of two universities in Michigan to break the top 10. The placement was achieved thanks to the 1,091,619 pounds that the university recycled during the competition.

GVSU has taken part in RecycleMania since 2012, and each year they have continued to improve their performance.

Several student organizations, along with participants from the sustainability team, put in the time and effort to help GVSU do well in the competition. Volunteers would assist students and faculty in dining halls and other parts of campus to ensure trash was being thrown into the correct bin and spread the word about the university’s recycling efforts at the same time.

“Once people know about it and are making the effort to recycle during their busy day, it all helps the bottom number,” Aubil said.

One of the student organizations that assisted Grand Valley State in the competition was the campus dining organization “Green Team”, whose volunteers were able to contribute to the recycling efforts by advertising the process to those on campus. The group also made a promotional video that demonstrated how to properly discard waste on campus. Chelsey Kaminsky, President of the Student Environmental Coalition and Green Team volunteer, said waste management on campus could “still use further prioritization.”

Green Team plans to continue to educate more students and faculty on how sustainability can become a part of everyone’s daily life. Some members have found that the work done during the last school year has already started to make an impact.

“People will still sort their trash correctly on their own with no Green Team member present,” said SEC Vice President Francesca Ortisi. “This really shows that the Green Team has made a big impact on campus just by monitoring.”

Moving forward, the coalition is continuing their efforts to push for more visibility and education of sustainability on and off campus.

“Next year, I would like to focus on tackling waste from the source and hopefully convince Panda (Express) to adopt some compostable containers, as well as make our presence as a club and our message more well known,” Kaminski said. The group is also planning to hold events to promote living eco-consciously, as well as host a collaboration event with the Supply Chain Management Club.

GVSU’s Sustainability Team hopes to expand off the progress that was made during the 2018 RecycleMania competition. “I would like to push harder next year,” Aubil said.

The Sustainability Office looks for volunteers on projects year-round and offers internships for those interested. Students can also get involved with Green Team by visiting the GVSU Student Environmental Coalition Facebook page.

Kaminski said the SEC and Green Team are happy to have anyone join the team no matter their level of experience; as they put it, “sustainability is for everyone.”