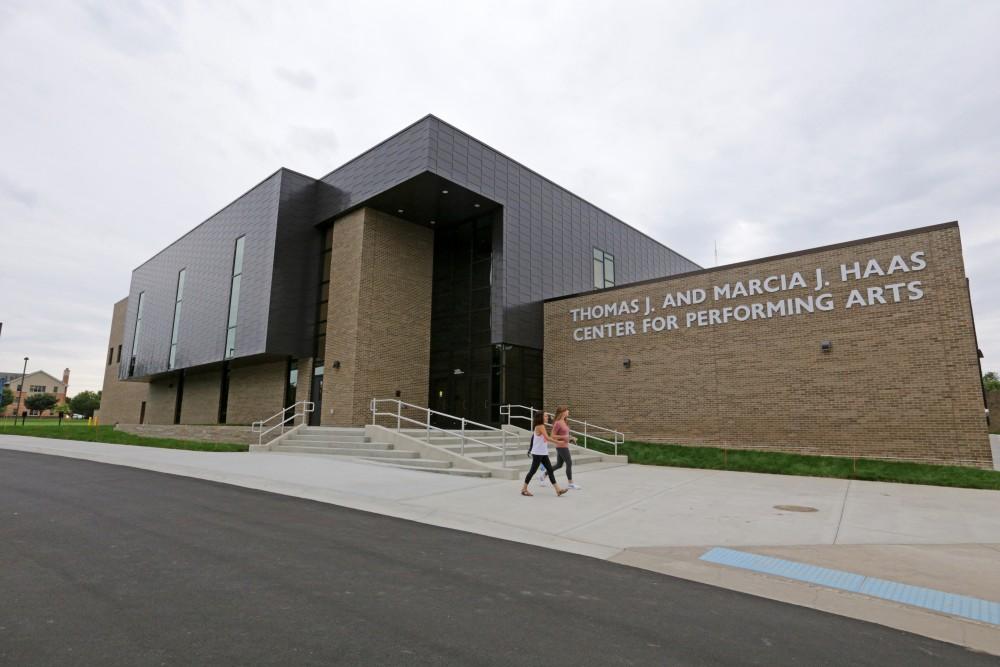 Danny Phipps, chair of the music, theatre and dance department, was the first to make his remarks in front of donors, administrators and alumni in the Louis Armstrong Theatre.

The black box theater, which will be dedicated in October, is a flexible and reconfigurable performance space, equipped with a hybrid tungsten-LED lighting system, digital audio mixing equipment, and both wired and wireless networks. It seats a maximum of 150 people.

Seth Burton, a senior in both the theatre and communications programs, was acting as an usher at Friday’s ceremony in full costume for the upcoming production “The Tempest.”

“Words cannot describe my excitement,” he said. Burton and other theatre majors will have rehearsals as often as six days a week in the new spaces.

“This building never sleeps; there’s always something going on,” he said.

The new ensemble rooms—one each for jazz, contemporary and classical music—are each equipped with a suite of classroom technology and are also specialized for music with high ceilings, better speakers and adjustable sound damping on the walls.

“The whole complex is going to inspire students,” said Tim Froncek, affiliate music professor and director of jazz ensembles. Froncek has worked at GVSU for 12 years and has never had a dedicated room for jazz before.

According to Nate Bliton, the equipment and stage manager, the old dance studios now have brand new Marley flooring, which is more forgiving for a dancer’s feet and joints. The new rehearsal space also has the same footprint as the black box theater to allow for more accurate rehearsing. The reception area will be a social and study space for students when not in use for production receptions.

“We’re finally hitting the point where it’s all coming together,” Bliton said. According to him, the building had previously been so busy that students couldn’t find the space to rehearse in it and professors sometimes struggled to find teaching space.

After being introduced, Haas and his wife approached the podium to the sound of a brass quintet playing in the background. Marcia Haas made her remarks first.

“We know that for a student to take their education and turn it into a meaningful career in the performing arts, they need to be in a competitive environment where their talent is fully developed,” she said. As she thanked her family, some of whom had traveled across the country to attend, for their support, her voice started to crack and she pulled her husband close for support. Once she finished, Haas took her place.

After praising and thanking students, the university president also recognized Associate Vice President for Facilities Planning James Moyer for his part in the planning and execution of the renovation of the new facility, but he didn’t get too wrapped up in the structure.

“We do have the bricks and sticks here, but what happens inside is magical,” he said. “The arts are so important to all of us. They lift us up, they make us think, they give us hope.”

After his remarks, the heavy, official ribbon was spread across the stage and scissors were passed out to the Haas family; Provost and Executive Vice President for Academic and Student Affairs Maria Cimitile; music, theatre and dance department staff; and others. As the brass quintet played, the ribbon was cut, the building officially opened and the guests excused to the lobby for refreshments.