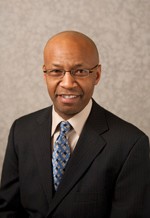 Grand Valley State University’s E. Miles Wilson, director of philanthropic and nonprofit services at the Dorothy A. Johnson Center of Philanthropy, has been appointed to the State of Michigan’s Community Service Commission.

“This is a wonderful recognition of Miles, his skill, and of the Johnson Center,” said Matt McLogan, vice president of University Relations. “We’re always pleased when one of our own is chosen to assist in state policy making.”

Wilson and five others were appointed by Gov. Rick Snyder on Oct. 22 and five more were reappointed to the commission. The Community Service Commission was created in 1991 and is a 25-member board that attempts to strengthen communities across Michigan through volunteerism.

“Michigan is a great place to live, work and play, largely because its citizens believe so strongly in the values of volunteerism and community service,” Gov. Snyder said in a press release. “These appointees bring outstanding experiences to this board and I am thankful for their willingness to serve.”

Wilson joined GVSU in 2009 as the director of The Grantmaking School, but his experience goes back further than that.

“I guess I have been involved in philanthropy at one level or another for probably the last twenty years,” Wilson said. “One of the interesting things I think to note is I was honored to be part of the initial start up team for the Corporation for National and Community Service, which provides some of the funding for the state commission here in Michigan, and my responsibilities when I was at the Corporation for National and Community Service was to work with Michigan among other states around the country.”

Wilson has been responsible for the Johnson Center’s national work in providing training and support to professionals and their organizations while also offering support to Michigan-based nonprofit organizations.

“I think, when speaking about philanthropy, one of the things I do enjoy most is really being able to use financial resources, use intellectual resources and ideas of people on the ground and people who are thinking about how to solve community problems, to help pull those pieces together so we can try to make a difference,” Wilson said. “I have been really fortunate to be in a number of places such as where I am right now at the Johnson Center for Philanthropy, because it’s really among the top centers of its kind in the country. So I get to do what I love every day.”

Although he is a native of Columbus, Ohio, Wilson moved to the Grand Rapids area in 2009 to take the position at the Johnson Center and has now become involved in projects across West Michigan.

“I have been here for nearly four years and most of my work has been focused on Western Michigan where I live and work, it’s my community now,” Wilson said. “This really gives me an opportunity to make more of a difference statewide and also to engage in something that I care really deeply about.”

Wilson, who will continue working at GVSU while serving on the commission, credits his experience at the Johnson Center as preparation for his new position.

“I moved here to take the job at the Johnson Center, so given the importance of the Johnson Center, not just nationally but for the state of Michigan, and working so closely with non-profits, foundations and other organizations like the Counsil Michigan Foundations, I think it has really given me a lot of the knowledge and information and exposure and experience that I need to be an effective commissioner,” Wilson said. “To understand to the best of my abilities and to formulate good responses to the challenges and needs and the manner in which volunteer capacity and resources are going to be helpful to communities around the state of Michigan. In some ways, had I not had this role at the Johnson Center, I would be a very poor selection for the governor’s Community Service Commission.”

The Johnson Center, which is located in downtown Grand Rapids, has provided many services through the years to help in the area of philanthropy.

Wilson said that along with publishing the only peer reviewed journal of philanthropy in the United States, the center serves as the management support organization of non-profits throughout West Michigan.

“… we provide training, we offer workshops all throughout the year to help strengthen the work of nonprofits,” Wilson said. “We also provide consultation services, technical assistance to nonprofits. We get hands on with them to actually help them improve the quality and the impact of their work.”

One thing is clear for Wilson as he puts in time at the Johnson Center and now with the commission, he is doing what he loves.

“The best part of all is that I get to do something I think that we should all aspire to do, to serve,” Wilson said. “It is part and parcel to being a citizen in democracy that we get to serve, so this is a really wonderful opportunity. I’ll be doing something I know and something I care about and with an amazingly fine group of leaders from across the state of Michigan.”