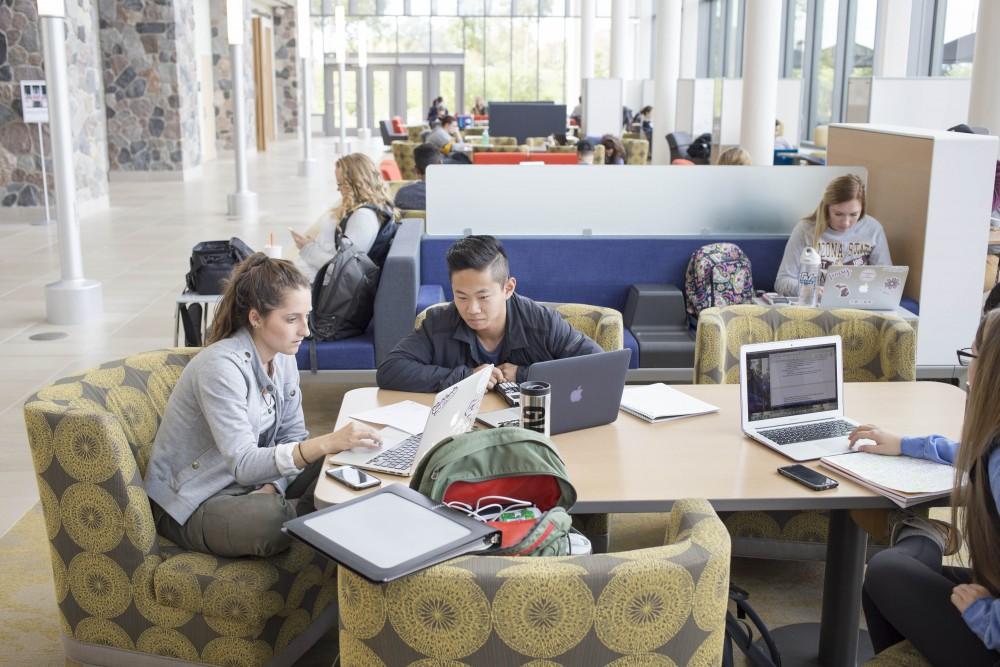 Many scholars publish research to gain credibility in their field and to be noticed by colleagues. Doing so helps them make progress in their careers and become candidates for grants and funding.

However, some people at the undergraduate level simply may not have the resources, prestige or opportunity to publish research they’ve done in their field, whether it be groundbreaking or not.

Luckily for students at Grand Valley State University, GVSU has a solution.

Scholarworks is an online database for faculty and student research available for people around the world to access and use. The site has recently hit 3 million downloads (as of late September 2016), and that number is continuing to grow.

“I’ve been watching the downloads per year and the downloads per month steadily grow, and it’s exciting to see because it means the research that is helping students, faculty and staff here is continuing to be useful,” said Matt Ruen, scholarly communications outreach coordinator at GVSU.

In addition, Scholarworks hit a record with the most downloads of Frederik Meijer Honors College senior projects in a single year at roughly 76,000 downloads over the course of 2016.

According to a graphic provided by Ruen, there were more than 50,000 Scholarworks downloads in 2016 per month, and downloads neared 100,000 per month in May and September. Ruen thinks these numbers are significant because they show that people are using the site.

In fact, people from around the world are accessing and using Scholarworks. There is a site that tracks downloads on Scholarworks by putting up colored circles with numbers inside of them to show downloads in a particular area. Download traffic is heavy in densely populated areas such as New York City, Southern California, Chicago and London, but there is also a high number of downloads in places like South Africa, the Philippines and India.

There was even a single download of work in Vanavara, a rural town in central Russia, titled “Attachment, Relationship Maintenance, and Stress in Long Distance and Geographically Close Romantic Relationships.”

The site has been growing steadily as more and more programs and departments are submitting work from their students and faculty on a number of different topics.

Ruen said Scholarworks is considered an appealing posting option for honors college students because, normally, “(they) would do an original research project, write it up, hand it in, and it would sit in a binder or a folder or a file on some shelf gathering dust and nothing would ever happen to it.”

“Now, with the opportunity to share it online if they want to, that original research can be discovered,” Ruen said. “People wouldn’t think to travel across the country to come to Grand Valley and walk into the honors college and say, ‘Can I look through your past honors projects? I want to find one that’s written about this topic I’m researching.’”

Danielle Lake, an assistant professor at the College of Liberal Studies, has become well acquainted with the program and has had her students use it to keep ideas alive from semester to semester.

“Ideas have to live on after a semester,” Lake said. “And Scholarworks offers a platform for ideas to grow from fall to winter, year after year.”

Lake’s students have been able to start and continue ideas by uploading research and findings, pictures, video and documents onto the Scholarworks database. Such ideas include the promotion of GVSU’s food pantry “Replenish,” the idea for a campus-based food truck that drives around promoting the food pantry and food insecurity on college campuses and methods to combat food insecurity at K-12 public schools. These ideas have not only been used on GVSU’s campus but around the world as well.

“What I love about publishing on this website is I can send (a person) this link, I can send them this video,” Lake said. “No one wants to read a 50 page portfolio but if I send a two minute video, maybe you’ll be interested and take a peak.”

Scholarworks has become a resource utilized by both GVSU students and people around the world and has given several GVSU students the opportunity to do something that had not been feasible prior to its inception.

“A lot of student work (gets) created—and it’s engaging research—and then it just kind of stops,” Ruen said. “We needed to provide a path for those people with certain ideas, that (perception) on an issue. (That’s) why we have (Scholarworks).”