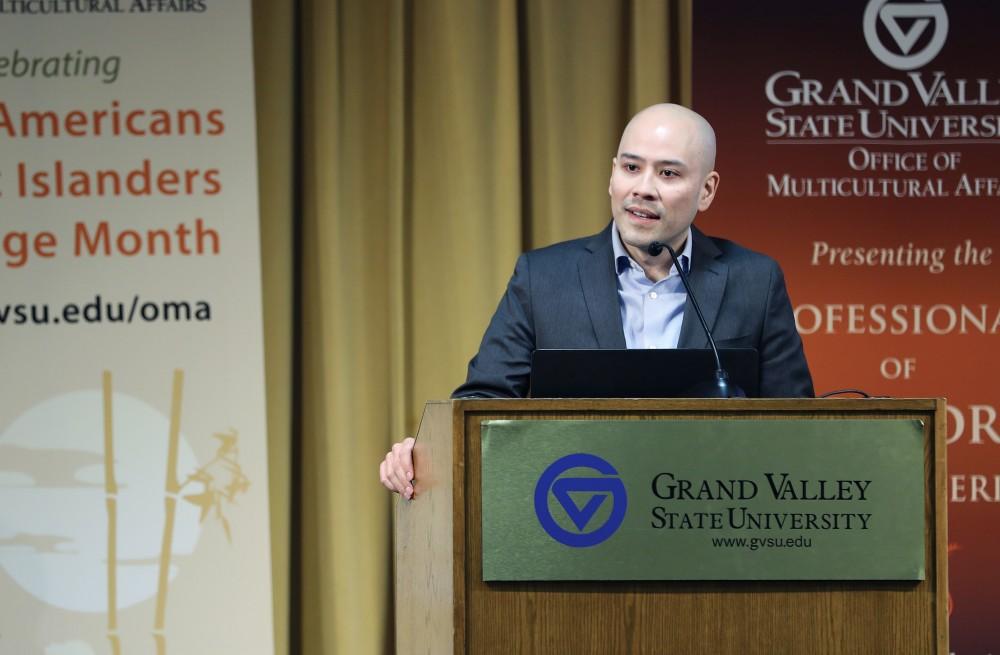 Museus said Asian-Americans are not often brought to the table in talks about race and are sometimes thought of outside the “race box.”

“Asian-American are often not thought about and not engaged in conversations about diversity, race and equity in society,” Museus said.

Museus addressed many reasons why Asian-Americans are excluded from these discussions. He said assumptions, like the ones that group different types of Asians together, are damaging. He said society has characterized Asian-Americans as a singular group and has attached stereotypes to that group.

“It’s the idea that because Asian-Americans have been lumped into this racial category, they all have this uniform experience, when that’s not the case,” Museus said.

Kin Ma, co-chair of the Asian Faculty and Staff Association, said some people believe Asian-Americans have assimilated into the larger Caucasian community, and that is why they are not consulted.

“We want to have those seats at the table so those conversations will happen and we can bring some of those perspectives we have,” Ma said.

“All those ethnicities have distinct cultures, languages and experiences in the United States,” Museus said.

Data that portrays Asian-Americans as vastly out-performing other racial groups is a part of a series of assertions that make up what Museus calls the “Model Minority Myth.” The myth states that Asian-Americans are universally successful academically and occupationally and therefore have no problems. It makes Asian-Americans out to be the “model minority,” comparing the upward mobility of some Asian-Americans to all other racial groups. The myth and the data do not take into account the differences between the achievement level of Asian Americans across different ethnicities, Museus said, and the ways some Asians were brought to the U.S. exclusively for the purpose of filling some higher-level occupations.

Museus said the myth is still prevalent today. He said some policymakers in Washington, D.C., still group all Asian Americans together in reports on education.

Museus also brought up how Asian-Americans are thought to be a danger to U.S. society. In the 1800s, Chinese-Americans were thought to be a drain on American society and on the economy. He also talked about the increase in anti-Asian hate crimes in the U.S. following the election of President Donald Trump.

“People can experience racism vicariously,” Museus said. “It doesn’t have to be directed at them for it (to) have an effect emotionally, psychologically and in other ways.”

Museus also spoke about the importance of addressing these issues in his presentation.

“Given where we are, at the point in history in which we find ourselves, these issues are extremely important, and ignoring them gets us nowhere,” he said. Museus said he witnessed a lot of discrimination and prejudice growing up multiracial, which inspired part of his presentation.

“I experienced a lot of things that made me understand the weight and the importance of these issues and how they can determine or shape our lives in ways we do or don’t know,” Museus said.

Museus’ presentation was part of the Office of Multicultural Affairs’ programming for Asian-American and Pacific Islander Heritage Celebration Month. Information on additional programming can be found at www.gvsu.edu/oma/asian-american-pacific-islander-heritage-celebration-21.htm.