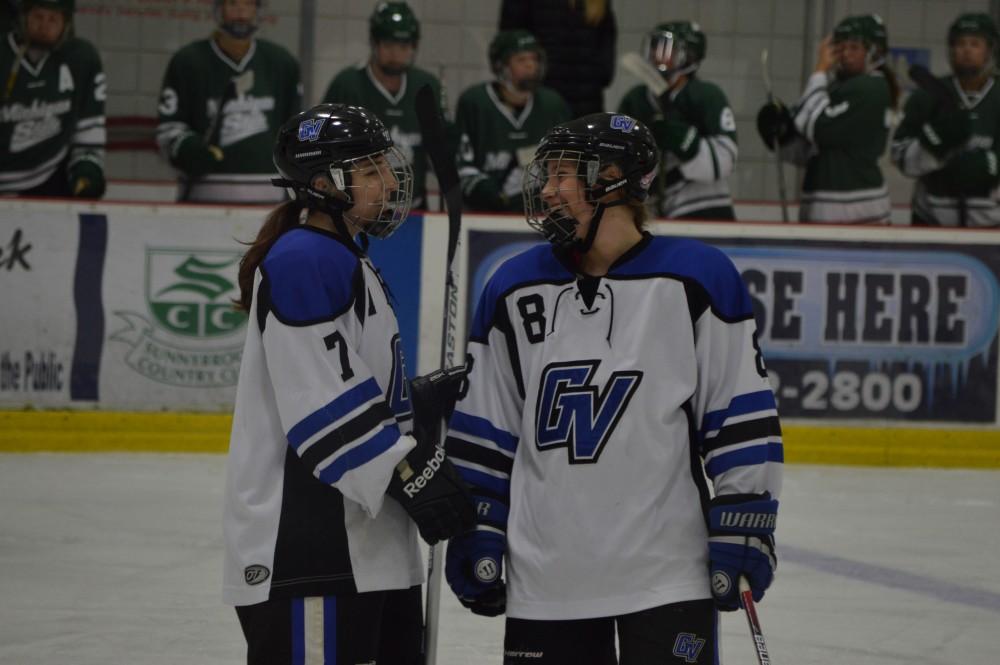 GVSU fought hard during the closing minutes of the game but fell short by just one goal, ending with a final score of 3-2.

Michigan State scored a goal shortly after the Lakers’ tying goal, putting them ahead by a score of 3-2. With just seconds left in the third period, GVSU made a final attempt to score against the Spartans only for it to be overturned, resulting in GVSU coming up short against MSU.

Women’s club hockey head coach Sean McKernan did not let this setback misdirect the team’s focus, as he believed this game was something more.

“Today was a big learning experience,” McKernan said. “We had (a) number of girls, about seven new girls on our team, so for them to gain the experience of league play is really important. Playing the top competition rival like Michigan State is only going to make us better.”

Although a loss will appear in the record column, McKernan knows the lessons will make it worth it over time.

“I told the girls, ‘We win; we learn; we don’t lose,’” he said. “So, we’re going to use it as (a) learning experience and hopefully get better from here on.”

The Lakers gave their fans a burst of energy during the first period, but as the game went on, GVSU lost their focus, dropping their energy levels to a point where they couldn’t find a way to come back.

For defensive player Corey Robinson, she felt the energy of the team drop after the first period. She knew her team had to keep the intensity going throughout the whole game.

“I think we played really well,” Robinson said. “I think we started the game with really high energy. I really liked the first period, but our energy kind of took a turn for the worst on the second and third period. But, I think tomorrow we can really come out and have our energy stay up the whole entire game, feed into that, and I think it’ll go better tomorrow.”

Despite Saturday’s setback, GVSU showed strength throughout the periods, creating a competitive game. With a strong defense, the Lakers effectively protected their territory while also managing to find each other to form open passes on offense.

GVSU forward Alex Brinkman noticed what her team was doing well but also noted the improvements the team needed to make from this contest before the next matchup.

“One of the strengths was definitely our intensity, when we did have it,” Brinkman said. “And we definitely need to work on, like Corey said, keeping that consistent intensity, not dropping down then going back up kind of thing.”

The Lakers may have been defending too hard, as they took home quite a few penalties.

“Definitely less penalties tomorrow,” Brinkman said. “Just more team play as a whole, more working with each other instead of trying to take it yourself kind of thing. All things work out tomorrow.”