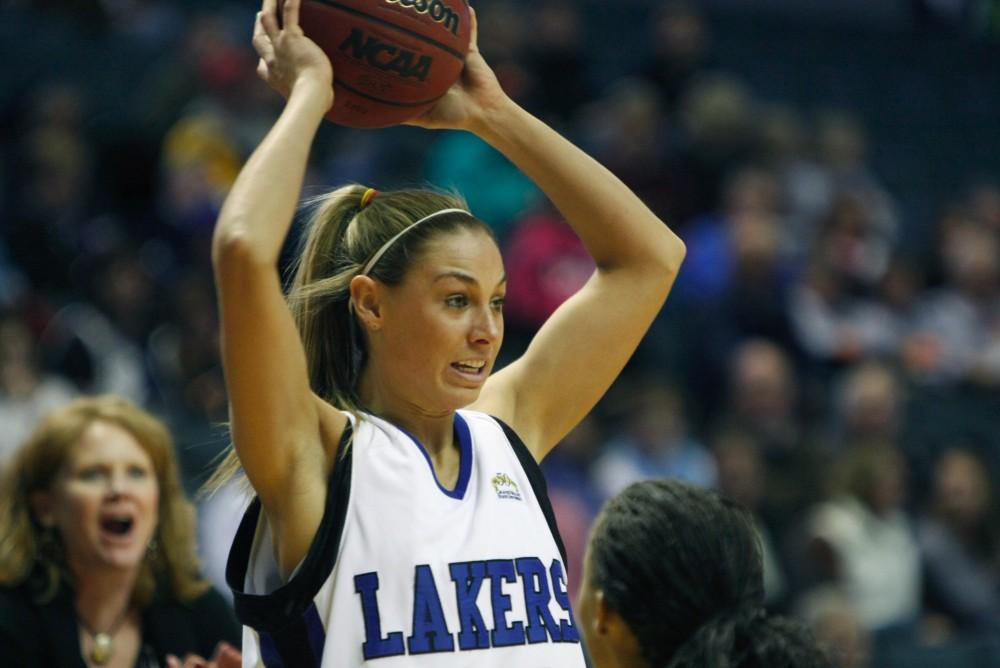 With Detroit Pistons public address announcer John Mason firing up the crowd all throughout the night, the Lakers used a 19-5 run midway through the second half to earn a comeback win. Despite trailing at halftime, the Lakers outscored the Bulldogs 36-25 in the second half, getting several crucial defensive stops and converting on last-minute free throws to ice the game.

Sophomore guard Lauren Stodola went to the line with 40 ticks left on the clock in the second half with GVSU leading by three points. She coolly converted both free throws from the charity stripe, making it a two-possession game.

After a Laker steal, junior guard Jasmine Padin was fouled and made both of her free throws as well, leading to an insurmountable seven-point lead for the Lakers, which they did not relinquish.

Four Lakers reached double digits in points in the win. Leading the way for GVSU was sophomore Brittany Taylor, who shot 6-9 from the field for 16 points. Sophomore center Alex Stelfox added 15 while pulling down eight rebounds, with six of those coming in the second half. Stodola added 14 points ,while Padin had ten points, eight assists and four steals.

“I’m very proud of our team with how they came together, they played very solid defense and finished some tremendous possessions down the stretch,” GVSU head coach Janel Burgess said. “Most importantly I loved their energy that they had from the very beginning to the very end.”

The atmosphere and intensity of the game resonated with Burgess as well as with the players.

“First of all, before tip off we had to take about ten deep breaths, since we were pretty fired up, to say the least,” Burgess said. “It was just an amazing atmosphere. It was exciting with how hard Grand Valley worked to give our ladies this opportunity, and I’m even more proud with how our team took care of business and represented this university in great fashion.”

When asked after the game if it was something they would like to do again, sophomores Taylor, Stelfox and Stodola resoundingly said yes.

“It was really fun-we didn’t want to look too far forward to this game but we all had it in the back of our minds that our university was putting this on for us,” Taylor said. “It was a big deal and everyone put a lot of work into it.”

The Lakers improved to 15-4 overall and 8-4 in the GLIAC standings.