Lakers prove their football worth on pro day 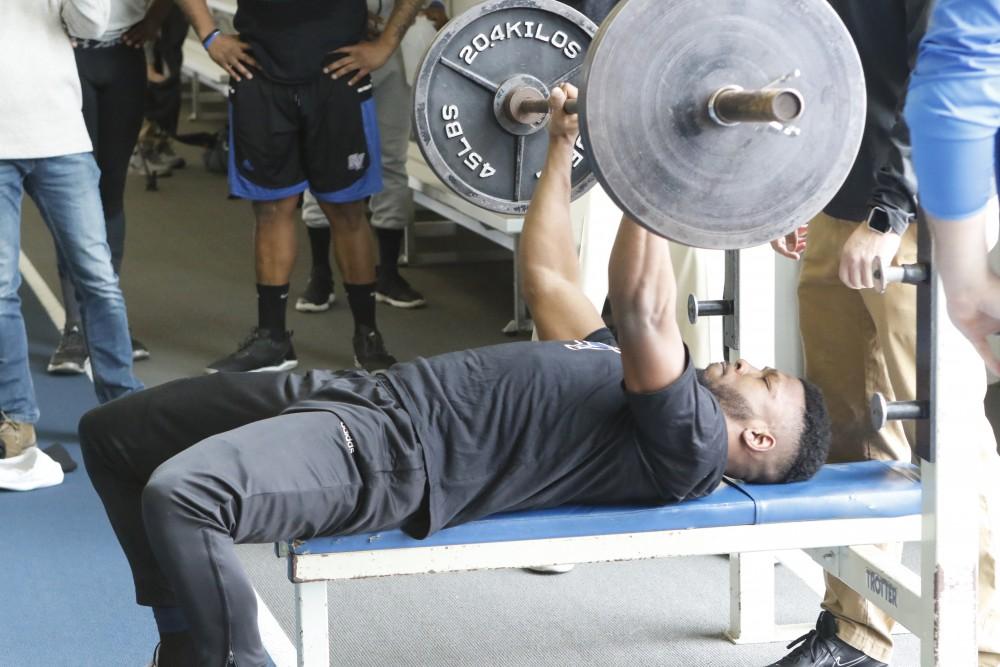 Without a doubt, one of the most highly anticipated events in sports every spring is the National Football League Draft. Every April, the top college football players in the country nervously await to hear their phones ring with confirmation that they’ve been selected or have garnered interest in being signed to a professional contract.

Without months of behind-the-scenes preparation and workouts leading up to the big day, no players (or teams) would have any idea what route they might be taking.

That’s where pro days come in, and on Thursday, March 15, Grand Valley State held its very own to showcase the abundant talent encased in the university’s historic program.

“You hope the best for your players,” said GVSU football head coach Matt Mitchell. “You put the time and effort into getting to this point, so you just hope that everyone is 100 percent. For me, organizing this day with the scouts and everything is just about giving our guys a platform. You just want to see kids that you know take advantage of it.”

Some of the many drills each player participated in included the bench press (225 pounds), vertical jump, broad jump, shuttle run and route running/pass catching. After the day, the players seemingly impressed the handful of scouts in attendance—and felt good doing so.

“Overall, I’m pretty satisfied,” Keizer said. “It didn’t go perfect; wish I could have run a little bit better on the 40. Had a couple slip-ups on the L-drill with those cones, but overall I was pretty satisfied with my performance. I felt prepared coming in. It’s never going to be perfect exactly. I did the best I could. That’s all I can really ask for.”

The 6-foot-5-inch player put on a worthy performance during pro day and, as of now, is the most likely Laker to be drafted, according to Mitchell.

Even with his 4.4-second pro agility, 4.75-second 40-yard dash, 10-foot-1-inch broad jump and 32-inch vertical leap—above average numbers for the tight end position—Keizer’s 27 reps on the 225-pound bench press was his most impressive stat of the day. At the NFL Draft Combine last month, the largest number by a tight end was 23. That really blew people away, though he was more humble than boastful about it.

“I was proud of that,” Keizer said. “I knew going in I’d probably put up more than most of those guys. There’s a lot of measurables. That’s just one of the tests, and, to be honest, it’s one of the more insignificant tests. As long as you get above 20 at my position, in my mind it’s just kind of a check. It was good, but there’s a lot of other areas, too, so I’m not really hanging my laurels on that.”

Even if he is not selected in the draft, Keizer should have no problem finding a team as he has already had multiple meetings with NFL scouts who have declared their interest in signing him as a preferred free agent if he makes it through draft day.

He is not alone in Allendale in that regard. Pougnet, with 22 reps on the bench press, a 4.64-second 40 time and a 32-inch vertical, was pleased with the way he performed on Thursday, and his athleticism and versatility should make him an ideal fit for a number of teams.

“I feel really good,” Pougnet said. “Still have a couple more things to do with position work, actually football stuff now, but from a numbers point of view, I feel really good about things. Yeah, I’m happy with it so far but want to finish strong. I just kind of look at myself as a football player. (I’ll play) wherever (teams) want to put me.

“Linebacker, safety, nickel, (defensive) end, special teams as well. … We’ll see where they want to put me. I always try to attack everything with a great attitude. No matter what the situation is, hopefully I’m a good leader to everyone else out here. I’m going to give it all I’ve got.”

Meanwhile, while Bean’s pro day numbers were solid, he has already received reported interest from the Detroit Lions, according to draft analyst Tony Pauline.

Any player who is eligible to be selected but is not drafted will then immediately become a preferred free agent able to sign with any team.

The NFL Draft begins the evening of Thursday, April 26, with the first round and is scheduled to conclude Saturday, April 28, with rounds four through seven.