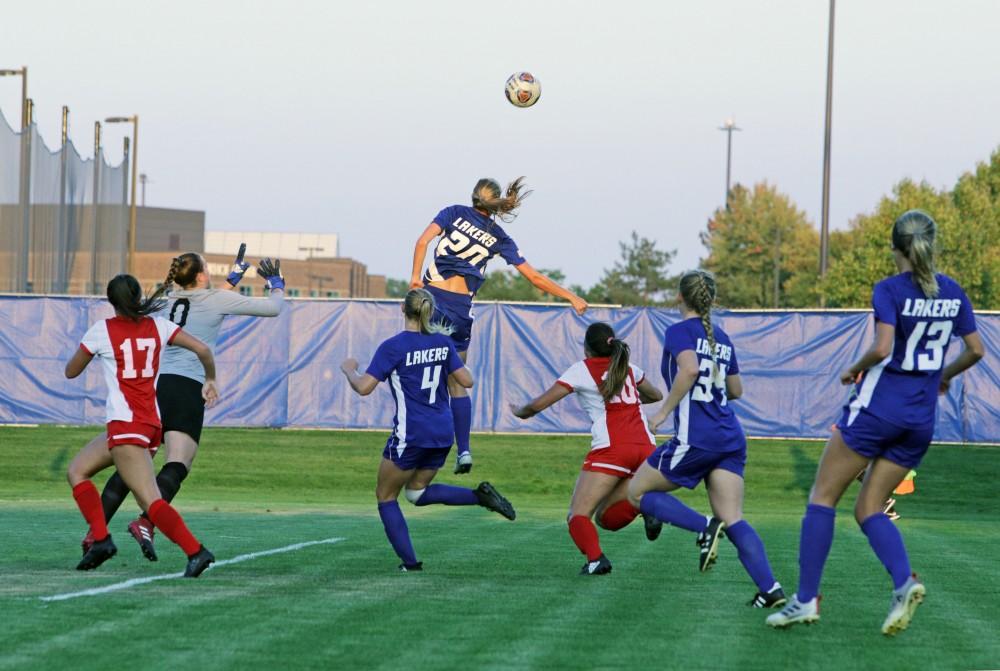 Grand Valley State landed the first blow in the Battle of the Valleys.

The Lakers entered the game ranked seventh in the country at 4-2 looking to win their fifth straight. SVSU came to Allendale with an identical record, although they had not faced the same level of competition as GVSU.

The first half was a cagey, physical affair. The Laker bench was noticeably animated at kickoff, shouting and cheering on their teammates. Both coaches were into the game as well, as the rivalry atmosphere was evident.

GVSU opened the scoring in the 13′ minute, as freshman midfielder Gianna Parlove was able to move past Cardinal goalkeeper Isabel Bauer with a tidy, right-footed finish. The Brighton, Michigan, native was able to find herself unmarked after being fed through by senior Gabriella Mencotti. The goal was the first of her career.

Parlove’s goal was the lone score of a tightly contested first half. The Lakers looked to control possession, while the Cardinals sat deeper, eager to hit GVSU on the counterattack. The Lakers outshot the Cardinals 11 to 2, with shots on goal being 5 to 1.

The Lakers started off the second half looking to continue imposing their physicality on the Cardinals. In the second minute of the half, GVSU senior midfielder Tracey McCoy was involved in a clash with an SVSU defender on the sideline. While both players were going for the ball, McCoy was able to get the better of her Cardinal counterpart and send her out of play.

Jeff Hosler, head coach of GVSU soccer, was happy with how his team responded to the Cardinal’s physicality. He credits the team’s preparedness to the rigorous non-conference schedule the program plays.

“Our girls have seen that in some matches, not only their system in terms of the formation, but that physicality they possess,” Hosler said. “Because we’ve been in those environments before, our kids have gotten better at making quicker decisions so that we can take some of the physicality out of the game by moving the ball faster.”

The Lakers seized control of the match early in the second half. First, in the 55′ minute, junior midfielder Tara Lierman added the Lakers’ second goal, heading in a cross played by junior Madz Ham from the right side. It was Lierman’s third goal of the season. Just three minutes later, Mencotti pushed the Laker lead to three, ripping in a right-footed finish from 10 yards for her sixth of the season.

From there, the Lakers maintained control of the outing. Senior holding midfielder Dani Johnson was key for GVSU’s possession, constantly getting the ball out of dangerous positions.

“We knew they were going to come in and battle,” Johnson said. “It’s always a bloodbath against Saginaw, and sometimes those games are fun, but we just have to keep it to a minimum. Personally, I like the physicality of games like that because you can get in, get stuck in and (then) get the job done.

“We definitely kept our composure. We kept possession, which didn’t get us into any nasty hits. It was good stuff.” 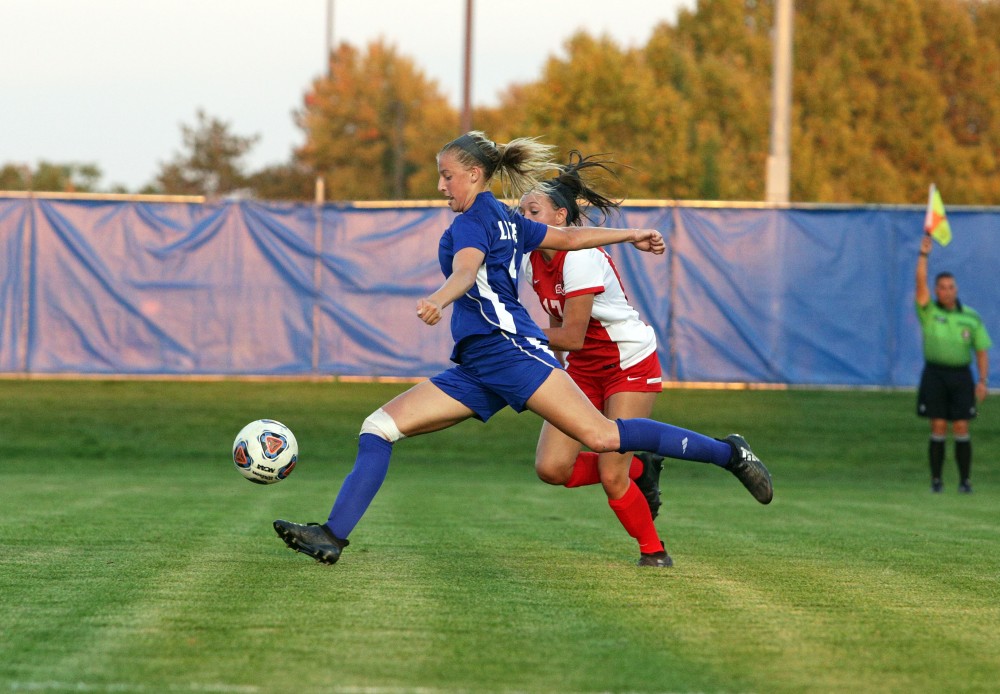 While the referee did let the game become very tenacious, Hosler thought the officiating was consistent.

“I thought he did a great job. I thought he was pretty consistent,” Hosler said. “For me, all I can ask our referee is to be consistent. I don’t think he impacted the game one way or another, and that’s all you can ask from a referee.”

For Johnson, Mencotti and the rest of the Laker senior class, it was the final regular season meeting of their careers with the archrival Cardinals. The group will graduate having won every single game they have played against SVSU.

“I think it’s something we take pride in, having those kinds of accomplishments,” Mencotti said.  “We just go out to every game not so much thinking about who the opponent is but making sure that our team as a whole is working hard and growing every day.”