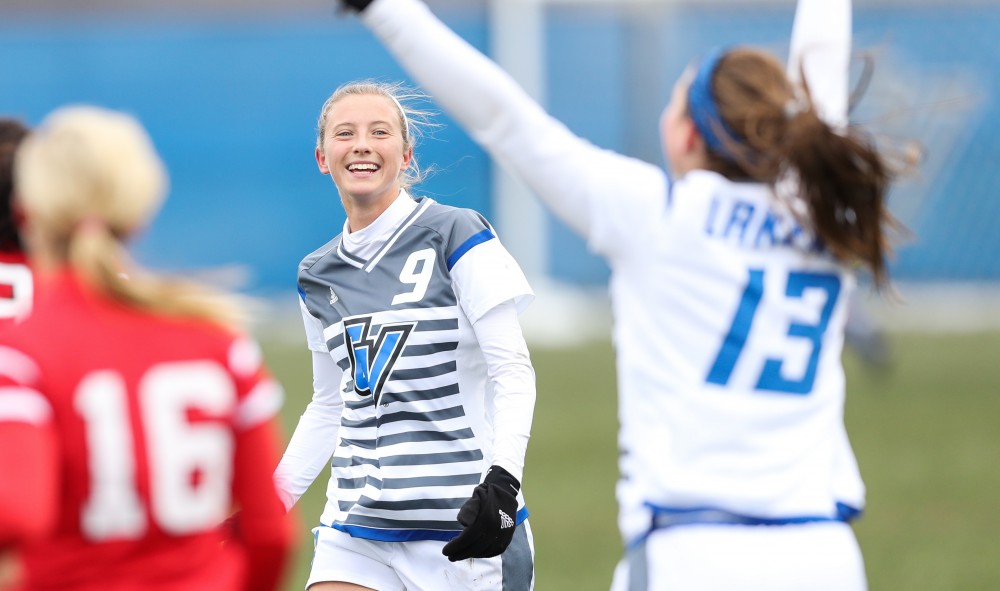 GVL/Kevin Sielaff - Madz Ham (9) reacts to the first goal of the game scored by Marti Corby (13) during the game versus Central Missouri on Sunday, Nov. 20, 2016 in Allendale.

For the eighth straight season, the Grand Valley State women’s soccer team will be playing in the NCAA Final Four. After a 3-1 win over Central Missouri in the quarterfinals, the No. 2 Lakers (22-1-1) will face off against No. 5 Columbus State (21-2) on Thursday, Dec. 1 in Kansas City.

GVSU’s defense with the lowest goals-against average in the nation will be tested Thursday, playing the highest-scoring offense in the nation in Columbus State. The Cougars have scored 96 goals this season for a 4.17 goals per game average.

“They are very gifted offensively,” said GVSU coach Jeff Hosler. “We just have to do what we have been doing all year and that’s be disciplined, close down spaces well, win balls and make sure we are playing good cover and overall shape behind the ball.”

The Cougars are 5-0 against teams ranked in the top-25 this year and are currently riding a 16-game win streak. GVSU is 3-0 against top-25 teams this season.

The Lakers have had success against the Cougars in the past. In the last year’s national championship game, GVSU beat Columbus State 2-0. Midfielder Marti Corby opened up the scoring in that game with a goal off a free kick.

“They were the better team for the first 30 minutes in the game last year,” Hosler said. “It’s very similar to the team a year ago, but all with another year of experience and all with a little more hunger because they got a taste of what the Final Four was like last year.”

The Cougars play a 3-5-2 formation, something that GVSU has not played against often this year. But with almost two weeks to prepare, the Lakers will be familiar with the formation come game time.

“Last year we only had one day to prepare for playing against that formation,” said senior defender Clare Carlson. “It’s been really nice having this extra time to prepare because it is tough formation to play against. There are a lot of different little quirks we need to adjust in our defensive shape.”

While the break has given them time to prepare, the Lakers have not been in game action for almost two weeks. The break is the longest of the season, but the team has experience this type of break the past three years.

Last season, the Lakers scored twice in the first 10 minutes against Western Washington in the Final Four game.

“Each of the last two years, we have come out really well,” Hosler said. “A little bit of the layoff makes the kids hungry to go play again. This time of the year, they want to get out and play games.”

The team received two days off for Thanksgiving in order to recuperate and take a mental break from soccer.

“We were given two days off to take a mental break,” Carlson said. “That helps a lot because by this time of the year a lot of people are mentally fatigued, and taking that break to not think about soccer for a little bit, or at least try to not think about it, allows us to come back mentally prepared and ready to go.”

The team will fly to Kansas City Tuesday morning before playing in the semifinals Thursday, Dec. 1 at 6 p.m.

“This is going to be the best opponent we’ve played all year,” Hosler said. “I think our girls are very focused and understand that.”

The winner of that game will face the winner of the Western Washington and Kutztown game in the NCAA Championship Saturday, Dec. 3.