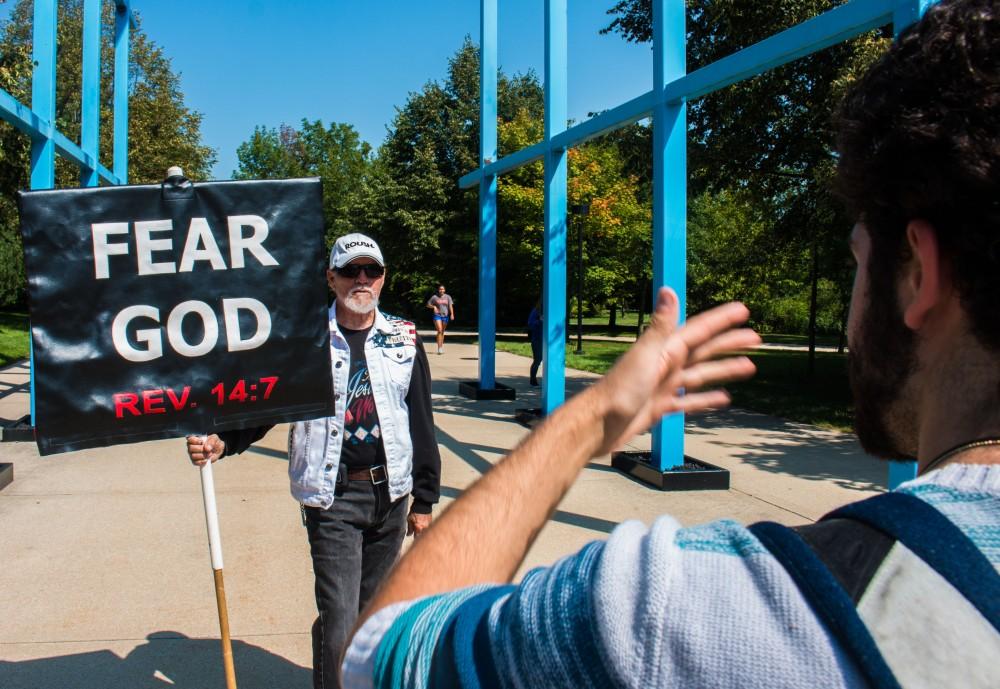 Birdsong is known for preaching controversially on college campuses and has preached at GVSU for the last 14 years, allegedly. Some views he expressed were his opposition to homosexuality, biracial unions, Islam, feminism, other religions besides Christianity and more.

His visit was met with a strong reaction from the student body. GVSU students voiced their disagreements both online and in person. Some students debated with the preacher, some took video, some made fun of him and some simply walked by.

The preacher was located in front of the Transformational Link sculpture on the Allendale Campus carrying a sign that said “Fear God” on one side and “Stop Sinning” on the other.

Many instances of students and Birdsong interacting were captured on various social media platforms, such as Facebook and Instagram. In addition, many GVSU faculty and staff walked past the preacher without engaging at all.

Birdsong spoke on his Facebook page of drawing crowds of more than 200 students and said that his sign was taken from him by students on multiple occasions.

Sydney Watson, a junior at GVSU and an interfaith intern at the  Kaufman Interfaith Institute, was a bystander listening in on what Birdsong was preaching.

Watson said everyone is entitled to their views but that when a demonstrator’s views make others uncomfortable, they have crossed a line and need to take a step back.

“I think about the Muslim students that are hijabi-wearing that walk past this area, and he’s talking about how only Christians are good,” Watson said. “That makes me very uncomfortable, so I can’t imagine how that would make someone else feel.”

She said she believes in respectful disagreements rather than yelling and screaming.

“I think his goal is to make people mad, so I think the worst thing to do is to go up to him and yell at him,” Watson said.

Alex Childs, a sophomore at GVSU, is another student who listened to Birdsong’s preaching. Childs said he has been a Christian for three or four years and that the way Birdsong is presenting the Gospel is false and misleading for those who may not know it as well as he does.

“I almost started crying hearing him talk,” Childs said. “I don’t want these freshmen to think this is what Jesus is. (He’s a) loving God who knows we’re going to mess up and we’re going to do as much as we can to be like him.”

Birdsong identifies as being a fundamentalist Christian and attends Faith Baptist Church in North Carolina. He often protests in the capital city of Raleigh, according to his Facebook page.

The Dean of Students Office has issued statements in the past about the free speech policies at GVSU. One statement reads: “Lawful, non-disruptive public demonstrations are permitted at Grand Valley and are protected by the First Amendment, without regard to the point of view being expressed.”

Jesse Bernal, the vice president for the Division of Inclusion and Equity, said bias incidents, which were created under GVSU’s anti-harassment policy, have been filed in the past by students in regard to Birdsong’s preaching.

However, he said there is no authority to prevent free speech and expressive activities at GVSU based on content.

Bernal said he sympathizes with students who are offended or “challenged” by some of the views expressed by outside sources coming to speak at GVSU, but he still stressed the commitment the university has made to respect people’s First Amendment right to free speech.

“We have to uphold the idea of the right the public has to freely express their First Amendment right,” Bernal said.

Bob Stoll, the associate dean for Student Life at GVSU, is in charge of managing individuals or groups that are outside of the university, such as Birdsong, who wish to engage in activities of free speech and expression on campus.

Stoll said the dates and times of outside parties visiting GVSU for expressive activities are not explicitly put out to the public by the university.