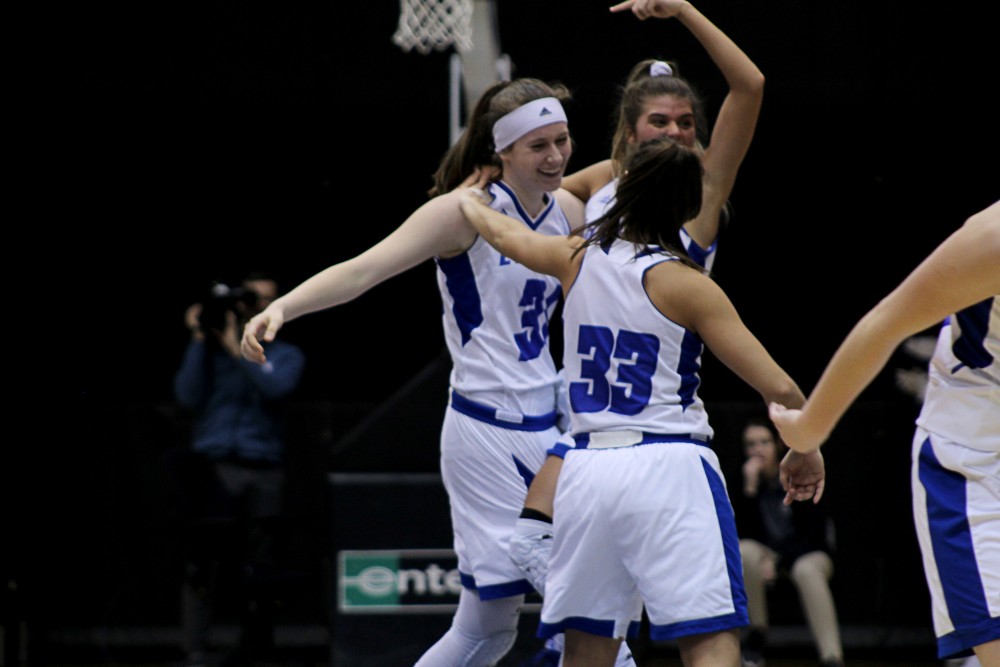 Both games were total team efforts, as all 14 players who saw game action during across the two victories scored.

The return home started hot for the Lakers, as they jumped out to a 42-22 first half lead against the Pride whole scoring no less than 19 points and allowing no more than 11 in any given quarter. Head coach Mike Williams wasn’t necessarily happy in the moment with the first half lead, though, but readjusted his expectations and allowed his team to expand their lead following the break.

“I had a little gut check at halftime. Sometimes as a coach, you have to have expectations but they can’t be too high and they can’t be continuous,” Williams said. “I thought we didn’t play great but we played really good and yet I’m always pushing for great. We went into the break and said ‘at halftime, we’re just playing with energy. Just play with energy. Be vocal. Play hard.’ We played better basketball in the second half because of it, because we weren’t focused on ‘did I do this wrong or this wrong or this wrong’ so it was a credit to our players just to do that.”

Among the Lakers’ scoring leaders were center Cassidy Boensch with 18 points and eight rebounds, forward Maddie Dailey with 14 points and nine boards, guard Jenn DeBoer with 13 points and guard Brooke McKinley with 11 points.

Despite the Pride’s conference-low two wins on the season heading into the contest, the first-place Lakers prepared as they would have for any other game with record out of mind, working hard in practice all week long as if they were playing the top team in the country.

“I feel like sometimes it’s hard to play a team with a bad record just because a lot of times, how they play doesn’t reflect the record,” Dailey said.

They carried the momentum from Thursday’s win into Saturday, as the Lakers once against took a 20-point lead into the break at 43-23 before eventually claiming their 33-point win. GVSU scored 48 points in the paint while committing only seven turnovers while forcing 18 from the Rangers, picking up 26 points off turnovers. Additionally, UWP only hit five of their 15 three-point attempts.

“We came out with a great deal of intensity,” Williams said. “I thought we did a good job keeping them off-balance on their threes. They’re a team that can really shoot the three-ball. I think they had 13 or 14 last game against Davenport, shot 48 percent so those were two of our focal points. I thought we did a really good job in both of those. I thought offensively, we went through some of the contact getting to the rim. Kept our eyes up, made great decisions finding people or getting to the basket in that first half especially.”

Boensch dominated in the post, scoring 26 points on 9-14 shooting with 13 rebounds. Her eighth point scored punched her ticket to the GVSU women’s basketball 1,000 point club, making her the 24th player in program history to achieve the feat.

“I’m just grateful to be a part of this team,” Boensch said. “I definitely couldn’t do it without them so it’s just a reflection of how well we work together.”