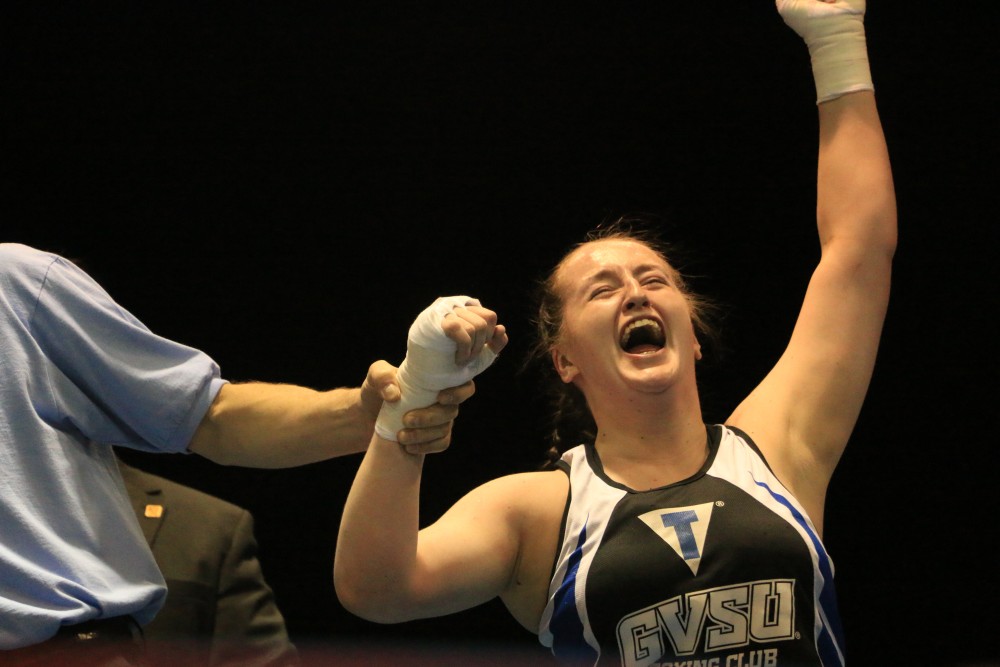 “I hated every minute of training, but I said, ‘Don’t quit. Suffer now and live the rest of your life as a champion,” once said former heavyweight boxing champion and American sports icon Muhammad Ali.

For Sarah Rae Batenburg, these words from one of boxing’s greatest rang true leading up to her Michigan Golden Gloves state championship fight on April 13. Months of practice, lifting, conditioning and dieting prepared Batenburg for the moment where she would have the opportunity to take home the Michigan Golden Gloves in her weight bracket.

“Like normal, I was nervous before the fight,” Batenburg said. “But once I got in that ring and the bell went off, all those nerves went away and I kind of just went at it from there on out.”

As the bell sounded at the beginning of their match, Batenburg and her opponent immediately went at it, charging forward toward one another and trading blow for blow for the first 30 seconds of the first round.

“Sarah Rae has that killer instinct,” said GVSU boxing club head coach Dennis Shimmell. “When she gets hit, she has that instinct to just meet her opponent and go at it.”

Shimmell added that after the first 30 seconds of the fight, Batenburg started to calm down and heed his advice.

“Pivot and move your head Sarah Rae,” Shimmell said. “Once she started to move her head and stay mobile, she had a clear advantage that she exploited at times.”

Batenburg realized that she had a natural advantage in terms of agility over her opponent and this allowed her to start dodging punches, landing combos and pull away from her opponent.

“Keep moving Sarah Rae, hit her low one time and then two times high and repeat,” Shimmell yelled throughout the match. As Batenburg did this more and more, he said it became more obvious punch by punch who was going to win the match.

“She started dodging and slipping her opponents punches and landing a lot of combinations during the back half of the second round,” Shimmell said. “When she went toe-to-toe with her opponent, it was pretty even but when she moved and landed combinations it was all very one-sided.”

After three rounds where the Deltaplex crowd rose to their feet, twice as flurries of punches were traded, Batenburg gathered with her opponent and their Golden Gloves referee in the middle of the ring. When Batenburg’s hand was raised and announced that she had won the fight by majority decision, she was overcome by emotion.

“It was literally the happiest moment of my life,” Batenburg said. “All my training and hard work paid off and I can’t express how happy I am to have finally accomplish this right now.”

Batenburg has already had quite a year fighting out of GVSU’s Boxing Club. Aside from her successes over the past weekend, Batenburg also won her weight division at the USIBA National Tournament at Syracuse University in New York back in March.

Batenburg fought back tears as she explained her motivation behind winning a Golden Gloves State Championship. She said she fought for this championship in honor of her late grandfather.

“This one is for my grandpa, this is for him,” Batenburg said. “I promised him that I would win a state championship before he died and unfortunately I couldn’t do that in time, but I still wanted to do this to make him proud.”