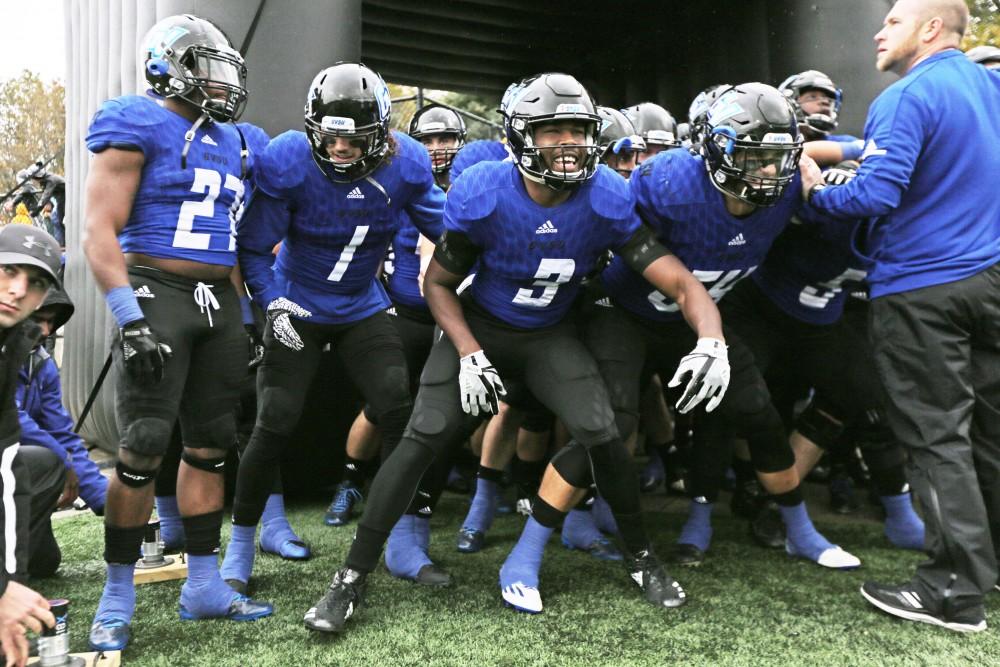 GVL / Emily Frye GVSU Football during the game against Northern on Saturday October 28, 2017.

With frigid air blowing through the quaint, little college town known as Allendale, a wealth of Grand Valley State seniors gathered with what was left of the student section following a 45-7 trouncing of the Tiffin University Dragons on Saturday, Nov. 11, at Lubbers Stadium.

They were on the outside looking in on the playoff picture, after all. With three losses in hand, they sat in ninth place in Super Region Three, and now that they had won their final regular-season game against Tiffin, they needed some help from the teams in front of them to get into the playoffs. First, No. 8 Harding University beat No. 7 Arkansas Tech University. That was good, as it put two three-loss teams in front of the Lakers. Everybody else won their final games, though, and it became time to wait.

All three of GVSU’s losses were to some of the top Division II teams in the country—University of Indianapolis (11-0), Ashland University (10-1) and Ferris State University (9-1, only loss to Ashland)—with all three losses coming on the road by a combined 8 points.

The Lakers knew that no three-loss team was better than they were, but the question remained: Would the playoff committee recognize that, or would they slot Harding (or even Arkansas Tech) ahead of them?

When the official announcement was made, Laker fans knew the worst had come: The selection committee opted for Harding and left GVSU out of the playoffs for the first time since 2014.

“You’re going to be hard-pressed to tell me that there’s a better 8-3 squad in the nation,” said head coach Matt Mitchell after the win against Tiffin “We had our opportunities, I understand that, but (we lost) all three games on the road by a combined total of 8 points. I think today kind of showed you even with a lack of depth the quality of the football program we have. Being 8-3, if there are other 8-3 squads that get in our region and we don’t, that’s a travesty.”

Strong words for certain, but now the Lakers must sit home watching their rivals play for an opportunity to take the NCAA National Title. Just because it ended prematurely does not mean the season wasn’t a pleasure to experience with the players, coaches, fans and game-day staff. This was my first season covering GVSU football, and it was everything I could have hoped it would be and more.

I remember the very first press conference I walked into. It was at a media luncheon at the Uccello’s Ristorante on Lake Michigan Drive in Standale. The first people I saw were Mitchell, wide receiver Brandon Bean and linebacker Garrett Pougnet. I sat down, asked the three guys questions and then went up to the all-you-can-eat buffet for an Italian lunch. It became a weekly routine. I’d be lying if I said those moments when the players could just be themselves without pads on weren’t some of my favorite parts of football season.

On GVSU’s Media Day, a week before the season’s beginning, you could sense that Mitchell—and the rest of the football program—had confidence in the players who had been recruited and believed in the season’s impending success.

But after losing to Indianapolis 24-21 in week one, the then No. 2-ranked Lakers had already become the season’s biggest upset in Division II. However, GVSU earned their respect back after rattling off six straight wins—three at home, three on the road—by a combined 213 points. Simply put, the boys were rolling.

Then, they got to Big Rapids to take on Ferris State in late October. We made the road trip, too, and the game didn’t let down the hype. With a 21-13 lead throughout most of the fourth quarter, it looked like the Lakers were bound to escape their rival’s home field with a “W.” Then, Ferris State tied the game. Then, GVSU took the lead back, but their extra point was blocked. Kicking was a major issue in the loss to Indianapolis, and there was just a feeling in the air that this miss was going to cost us again.

Although a loss, the road trip was still worth it, just like the Lakers’ trip to Detroit to face off agains the Wayne State Warriors.

In both of those games, I watched the best running back in Division II go to work. Marty Carter finished the season with 931 yards and nine touchdowns on only 122 carries. Those numbers would have been much higher had he not been banged up for several games toward the end of the season.

In his absence, the world was introduced to Bryce Young-Walls and Dre’on Kemp, who combined for 140 carries, 802 yards and 14 touchdowns—not bad for a few “bench players.”  None of them are seniors, either, so don’t worry: They’ll all be back.

The receiving corps was loaded with weapons, too. Seniors Nick Keizer and Urston “U-Haul” Smith left their marks on the passing game as reliable targets for Bart Williams, but nobody in the entire GLIAC had the impact that Bean had, especially in the final game of the season when he reeled in a school record 14 passes for 164 yards and four touchdowns in what will positively go down as one of the greatest single-game performances by a wide receiver in GVSU history.

Then there’s Williams himself, the “Instagram golden boy,” as Bean described him on Media Day. This is a guy who will, unless something unforeseen happens, have been the starting quarterback for all four years I will have been a student at GVSU. This year just might end up being the best, as he finished up with 166 completions on 277 attempts with 2,305 yards, 26 touchdowns and only five interceptions. Those numbers are good for a 157.2 efficiency rating, although his rating was not the highest on the team. That honor belongs to linebacker Collin Schlosser, who threw one pass and completed it for a 28-yard touchdown.

Schlosser was not just a star quarterback, though. He and fellow senior linebacker Garrett Pougnet were the dynamic duo in the middle of the defense—also known as “the boom brothers.” They were the team leaders in tackles (80 and 82), tackles for loss (8 and 11.5) and fumbles forced (2 and 3). In addition, Pougnet led the team in sacks with 5.5. Schlosser was third with 2.5.

Pougnet has not always been a linebacker. He moved there this season for the betterment of the team.

“I think it was the best move for Grand Valley football,” Mitchell said before the game against Wayne State. “His versatility allows us to do a lot of things. … I appreciate Garrett (being) willing to make that move to get our best combination of players on the field.”

All in all, this is not a team that deserves to be at home during playoff season. They have too much talent. There are too many stars. They are too well-coached.

Next season sees the Lakers hosting all three teams that beat them in 2017. Indianapolis, Ashland and Ferris State will all enter into Lubbers Stadium to face a GVSU squad that is eager for redemption.

On the bright side, though, they will have more time to play Euchre before training camp starts again. Williams still needs to prove to everybody else that he is better than Cole Kotopka and Dylan Carroll, after all.