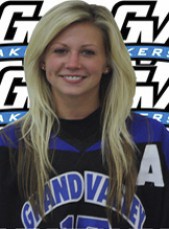 Taking nothing for granted after an “embarrassing” defeat earlier in the season to the University of Wisconsin, the Grand Valley State University women’s club hockey team dominated the Badgers in a two-game weekend sweep.

The Lakers improved to 12-7-1 after Sunday’s 4-1 win over Wisconsin. GVSU took Saturday’s tilt with an impressive 8-2 drubbing. When the teams met in November at a tournament held at Robert Morris University in Illinois, the Badgers, playing with a short bench, won 2-1.

Revenge was on the minds of several Laker players and head coach Darrell Gregorio.

“This weekend was definitely retribution, a little bit of payback for essentially embarrassing us the first time,” Gregorio said. “We got back to playing our systems. When we played them the first time, we got out of sorts, not really running our systems to the best of our abilities. Today (Sunday) it was back to focusing.”

The Badgers fell to 4-11-0 after the weekend loss, allowing 12 goals over the two games. Freshman Stacey Mathieu, senior Shelby Kurcharski and senior Lauren Lavasile opened up a quick 3-0 lead for the Lakers, who never looked back. Freshman Katie Danto added the fourth and final goal on the power play with a nifty backhand to deliver the 4-1 win.

On Saturday, the Lakers jumped out to an early 3-0 lead after the first period. Iavasile opened the scoring on the power play, before junior Kristen Iannuzzi and freshman Karyn Schmaltz tallied goals. Kucharski added a pair in the second period to extend the lead to 5-1, with junior Alisha Day adding another on the power play. Sophomore Dawn Wilson and Danto found the net in the third as the Lakers cruised to the 8-2 victory.

Several Lakers cited the break as a definitive factor in the team’s determination to avenge the November loss.

“I think having the break really made us want to play these two games,” freshman forward Kendra Myers said. “We lost to them in a tournament so we just wanted to come back and show that we were better than them.”

With only five games remaining on the schedule before the playoffs, which begin in mid-February, the Lakers know that each game has huge ramifications.

Senior defenseman and captain Meghan Jahn knew that the Lakers could not repeat their performance and needed a change of attitude coming into the weekend series.

“It was super important after losing to them earlier,” Jahn said.“We came in with big heads and knew they didn’t have too many people so we needed it (the loss) back. Coming out with two wins and beating them by a few goals was really nice.”

GVSU will play host to Robert Morris University at home in a two-game series on Saturday and Sunday, with CCWHA playoff seeding on the line.

“Ever since we got back from break, it’s been good,” Gregorio said. “Everyone’s back to focusing, knowing that we need to make a stretch here in the last weeks.”

Robert Morris defeated the Lakers twice in November, but Jahn is confident that being on the cusp of a playoff berth will inspire the team.

“I think it’s just going to take the passion of getting to nationals,” Jahn said. “I think playing Robert Morris is going to be two big games and we’re going to need a couple wins to move us up in the rankings and continue to hopefully go to nationals. We’re right on that line right now.”