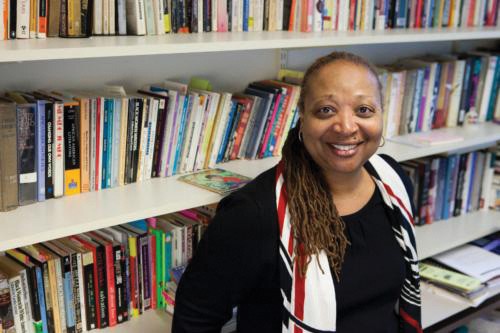 On Feb. 27, Grand Valley State University Associate Professor Veta Tucker will present on Freedom, Slavery and the Underground Railroad in Michigan from 4:30-6 p.m. in the Loosemore Auditorium of the DeVos Center. Tucker will deliver the same presentation on Feb. 28 from noon-1:30 p.m. in the Pere Marquette Room of the Kirkhof Center. The presentations will be the final Black History Month events for GVSU.

Tucker is a historian, humanities expert and author of the pamphlet, “A Twenty first Century History of the 1847 Kentucky Raid into Cass County” for “The Sanctuary and Deliverance” Kentucky mural project.

In addition to a resume filled with research, Tucker has also been teaching at the college level for 25 years. She created a course at GVSU for the African American Studies program on the Underground Railroad and the Abolitionist Movement that took place from 1830-1865. Tucker also adds a clear emphasis on the happenings that took place in Michigan that directly apply to these topics.

As a part of Black History Month at GVSU, the Office of Multicultural Affairs asked Veta Tucker to speak to students not just once, but twice.

“She has a wealth of knowledge,” said Bobby Springer, associate director of the OMA. “Everyone has heard about the Underground Railroad, to know we have someone here on campus that has worked (on and) researched the topic, why not let her share? It is an opportunity for us to learn more about the Underground Railroad in Michigan, which happened to play a very large part.”

As Black History Month comes to a close, Tucker will reveal details of Michigan’s largely instrumental part of the anti-slavery revolution.

One item she will speak about is a small but dedicated group of Michigan settlers—both blacks and whites—who objected to the U.S. Constitution’s endorsement of slavery and to territorial Michigan’s blind eye to it. In spite of the Constitution’s mandate to enforce slavery, Michigan abolitionists organized a small but powerful army—a secret network to help people held in slavery in Michigan and those escaping slavery in the South find freedom.

Tucker will share this piece of Michigan’s history and more at the Feb. 27 and 28 events.

“She has been a part of BHM committee since I have been involved,” Springer said. “She has always shared insight on areas to look at. She has always been very relevant and helpful with what we do not only with BHM but OMA as well.”

This is a LIB 100 and 201 approved event that is also free and open to the public. To find out more information, visit www.gvsu.edu/oma.
[email protected]